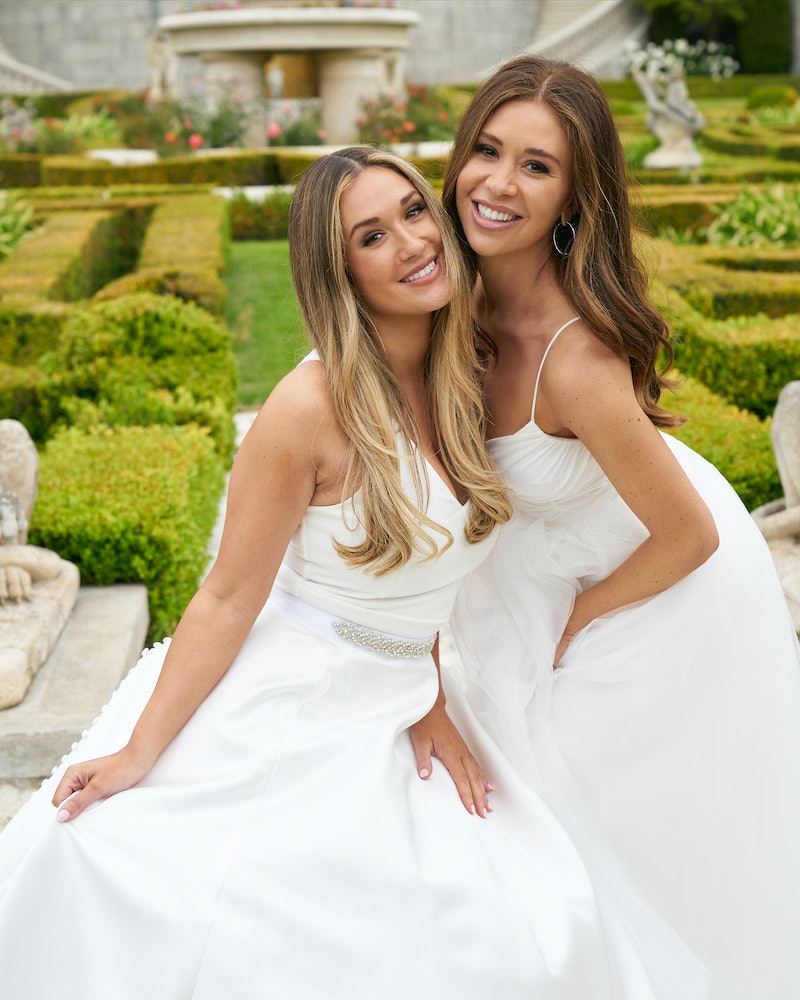 If you pay attention to Bachelor/ette chyrons, you might have noticed a few new labels during The Bachelorette Week 4: “Team Gabby” and “Team Rachel.” The show isn’t going full Edward vs. Jacob à la Twilight — the teams are ostensibly a handy device to keep track of which men are pursuing which Bachelorette. But the framing didn’t sit well with some fans, including former Bachelorette Kaitlyn Bristowe. “There shouldn’t be teams,” she wrote on her Instagram. “There should be connections ... why are we branding it this way? I want to believe it’s all worth it if they are happy. I just disagree with the journey to get there.”

For their part, though, Gabby Windey and Rachel Recchia are still operating as one unit — Team Windecchia, if you will. As the Bachelorettes tell Bustle, they’ve even collaborated on decisions we didn’t get to see on camera — like letting Meatball (aka James Clarke) back into the fold after he rejected Rachel’s rose during Week 3.

“We hadn't had that much time together, and ultimately I really just do like Meatball,” Rachel says. “Me and Gabby were both in on that decision, and having him back was definitely really nice.”

While last week’s rose ceremony switch allowed Gabby and Rachel to narrow their contestant pools, it did come with one little caveat: as Jesse Palmer explained, rejected roses would not be recycled. The rule took viewers by surprise — and according to Rachel, that twist (like much of this season) was a case of “making decisions on the fly.”

“That rose ceremony has never been done before — Jesse has never had to be a host during a rose ceremony where that was happening,” Rachel says. “So we were all just learning as we went.”

Week 3 and its retooled rose ceremony might have allowed the Bachelorettes to sort out their suitors, but it also meant Gabby and Rachel had to face a series of hurtful rejections, including when Hayden Markowitz suggested Gabby was “rough around the edges.” Fortunately, Week 4 saw Gabby forget all about it during her one-on-one date with Jason Alabaster — a Parisian outing that put mental health and healing at the forefront.

“That is why we're there, to make these connections with people like Jason,” Gabby says. “The contrasts between him and the Haydens are pretty striking, but I think that’s important to realize as you watch. No matter how down we may feel on ourselves, we have these other great connections that are keeping us there.”

Jason isn’t the only one vying for a chance with Gabby. During Week 4, Logan Palmer expressed his interest in Gabby despite already taking a place on Rachel’s team and accepting another rose from her. “There’s a chance that this isn’t received at all well,” Logan predicts during a voiceover at the end of the episode. “This could be a disaster — could totally blow up in my face. Like, a blaze of glory. But you know what? Fortune favors the bold.”

Such is life on The Bachelorette — when one villain exits, another promptly enters the chat. But even though Logan seems to be setting up the Bachelorette love triangle fans have been dreading from Day 1, Gabby assures fans that Rachel’s feelings will always come first. “Rachel was always on the forefront of my mind,” she says. “So, if anything were to happen like this, then my main concern would always be Rachel.”

The love is mutual. “The more I watch back this season, I am more impressed by her than I could have even been standing next to her,” Rachel says of her co-lead. “We just both feel really honored to have gone through this together and to be a part of each other’s stories.”