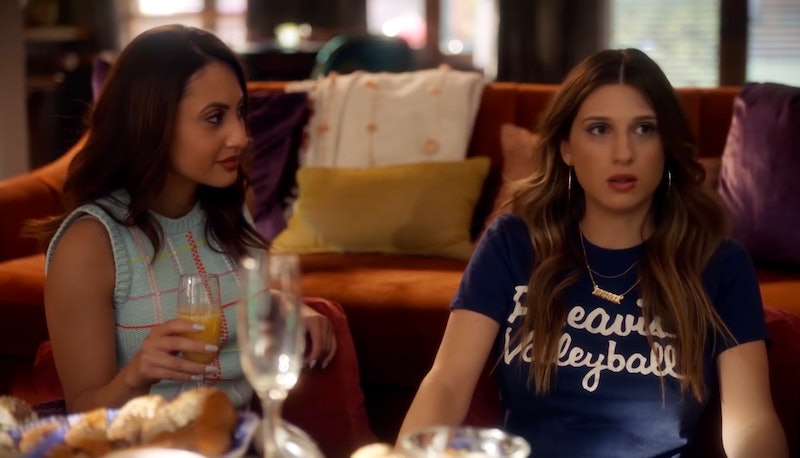 Spoilers ahead for grown-ish Season 3, Episode 14. Nomi may be the one who left CalU, but during her return to grown-ish in the Feb. 25 episode, she was the one schooling her friend group. "Just like racism, there are varying degrees of homophobia and I'm sorry but you're really treading some casually homophobic waters," she told Aaron and Doug after they denied that questioning Vivek's sexuality qualified as homophobia.

Then Nomi entered the chat. After first calling out the hypocrisy of Ana "begging" her for a kiss while drunk freshman year, she read the guys for "perpetuating outdated social constructs" that she called beyond problematic. "Look, you guys are my friends, and I know this is just coming from a place of pure ignorance and not hatred," Nomi said. "It's mainly just toxic masculinity." Exhibit A: Aaron felt the need to qualify Doug telling Vivek they'd love him regardless of his sexuality by asserting they're still straight. "Is the fear of Doug sounding gay so awful?" Nomi asked him.

Afterward, Nomi decided to talk to Aaron one-on-one "in a way that he would understand." She equated the situation to his personal belief that a "strong Black man dates strictly in his race," yet he had a "short-lived relationship" with "Conservative Cuban" Ana. "Does that one make you less of a strong Black man?" she asked. "One experience does not define someone for the rest of their life."

That finally clicked things into place, and the guys apologized to Vivek. It all seemed to get resolved a little too quickly (you can't just undo implicit, deep-seated homophobia with one conversation), but without Nomi, they may have never reached a place of understanding at all.