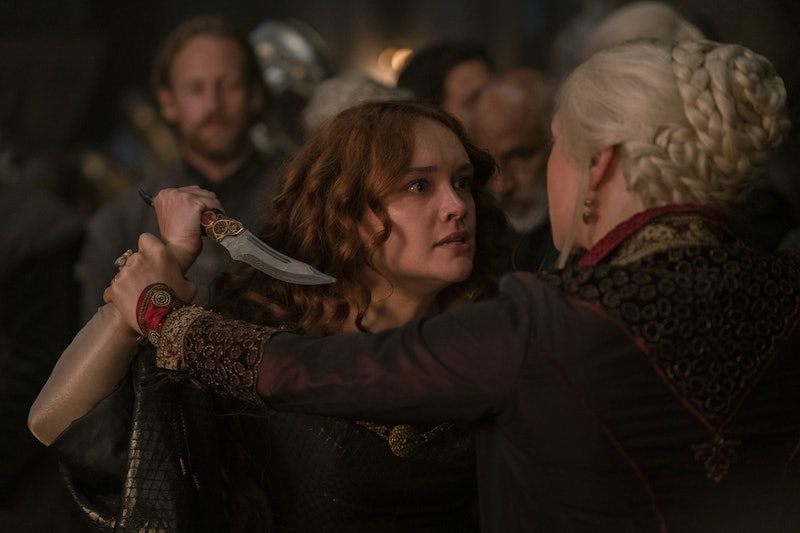 Spoilers ahead for House of the Dragon Episode 7. After more than half a season of rising tension (romantic and otherwise), House of the Dragon Episode 7 delivered its most dramatic entry yet. To recap: In the wake of Laena’s funeral, Rhaenyra and Daemon hooked up and ultimately hatched a plan to fake Laenor’s death so they could get married. Meanwhile, the royal kids were up to their own scheming.

After Aemond stole a now-riderless Vhagar, his cousins and nephews punished him for the opportunistic theft (really, kid? Laena *just* died). The children engaged in an all-out brawl that ended with Lucerys slashing Aemond’s eye — and Alicent didn’t exactly respond well to the attack. In fact, she suggested literal eye-for-an-eye retribution from Rhaenyra’s son. When that idea didn’t go over well, she attempted to do it herself and ended up slashing Rhaenyra’s arm in the process. “Exhausting, wasn’t it? Hiding beneath the cloak of your own righteousness,” Rhaneyra told Alicent, as she was about to be knifed. “But now they see you as you are.”

Indeed, the House of the Dragon denizens did finally see Alicent for who she was — not that viewers ever really had any doubt. Twitter users had fun responding to Alicent’s very messy episode.

Of course, many viewers were simply done with Alicent’s drama.

Some wondered how Alicent was able to walk away from stabbing Rhaenyra in the first place — because that’s kind of a big deal?

As many users pointed out, Alicent was already feeling angry after an affront earlier in the episode — in which Viserys told her, “I’m going to bed, Aemma,” accidentally (but hilariously) referring to his wife as her late predecessor.

Clearly, Viserys isn’t living out his potential final days with much love for his wife.

Many of the best memes and tweets about Alicent revolved around her friendship breakdown with Rhaenyra.

After all the drama that went on during House of the Dragon Episode 7, you might think things would settle down for a while — but alas, the book the show is based on, Fire & Blood, confirms this isn’t quite the case! Spoilers ahead for Fire & Blood. Just because Alicent’s attempts to avenge Aemond’s eye were thwarted doesn’t mean there won’t be payback from the royal family. In fact, Aemond eventually confronts Lucerys in a major, violent way — but, of course, it’s not clear if House of the Dragon will follow the book’s timeline exactly.

More like this
Matt Smith Proves He's Daddy Daemon In This Viral 'House Of The Dragon' Video
By Marina Watts
'Bridgerton' S3 Teases Exciting Social Season For Penelope Featherington
By Bustle
What Jen Shah's Delayed Sentencing Could Mean For The 'RHOSLC' Season 3 Reunion
By Brad Witter and Jake Viswanath
The First Trailer For 'That '90s Show' Includes So Many Nods To The Original Series
By Jack Irvin, Alyssa Lapid and Grace Wehniainen
Get Even More From Bustle — Sign Up For The Newsletter