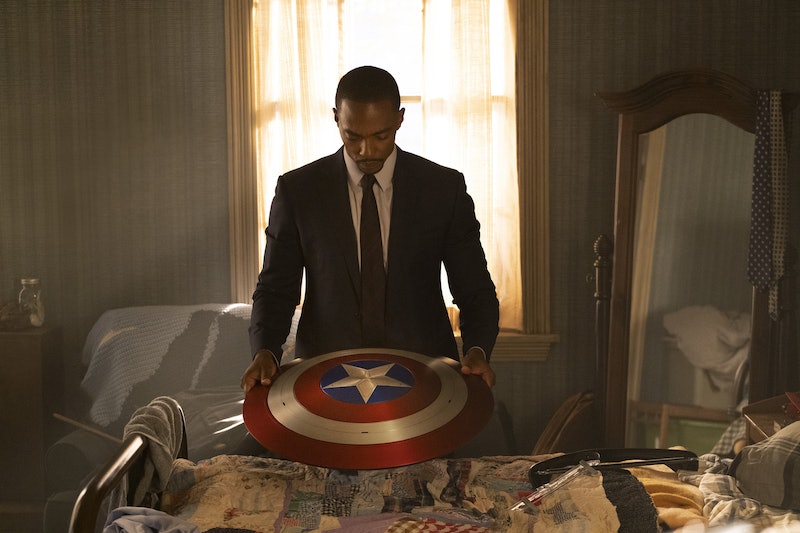 Spoilers ahead for The Falcon and the Winter Soldier Episode 1. Leading up to its premiere, The Falcon and the Winter Soldier dropped plenty of hints that Steve Rogers, aka Captain America, had died. There was a shot in the trailer of a funeral-ready Sam Wilson standing over Cap’s shield as well as dialogue that referenced the hero in the past tense. The premiere episode of the new Disney+ series confirms it: Captain America is gone.

Though we don’t get a poignant, hero-studded funeral scene a la Tony Stark’s in Endgame, the sad fact is confirmed when Sam surrenders Steve’s shield to the Smithsonian. “I don’t know if there’s ever been a greater symbol,” he says at the ceremony. “But it’s more about the man who propped it up. And he’s gone. So today we honor Steve’s legacy.”

We don’t know how Steve died (though he was pretty old), but it’s not clear if the rest of the world does, either. When Steve returned to the present day in Endgame, he seemed pretty content to keep his story to himself (enter the “I don’t think I will” meme), so it could even be feasible that Steve is only “dead” to the general public and is still living out the rest of his life quietly somewhere. Remember when Steve was featured in that classic “In Memoriam” video that kicked off Spider-Man: Far From Home? His inclusion there would make sense whether he was really dead or just “dead” to the rest of the world.

Although, if Steve is still alive, why would Sam and Bucky be so sad? They both spend much of the first episode in a sort of wandering, pensive state, each unsure of their respective places in a post-Endgame world. In the comics, Steve died a very different death than would have been possible at this point in the MCU. He was actually assassinated by Sharon Carter — don’t worry, she was under hypnosis at the time — and came back to life in a later issue.

Following a recent Deadline report that Chris Evans is set to reprise his Captain America role “in some form” in the MCU, there’s also been speculation that he shows up in Falcon and the Winter Soldier. Flashbacks to his past with Sam and Bucky could be one option, as they wouldn’t require any reworking of the fact that Steve is dead. Or perhaps he’ll take on a mentorship role in a future project. Either way, Evans himself hasn’t really given us reason to hope that he’ll be back. As he told Entertainment Tonight in 2019, “to stick the landing so well, it would be a shame to kind of revisit unless there was something very unique that we felt the need to reveal.” And on Jan. 14, apparently in response to the Deadline report, he simply tweeted, “News to me” with a shrug emoji. So for now, at least, we best get adjusted to a new person manning the Captain America shield.