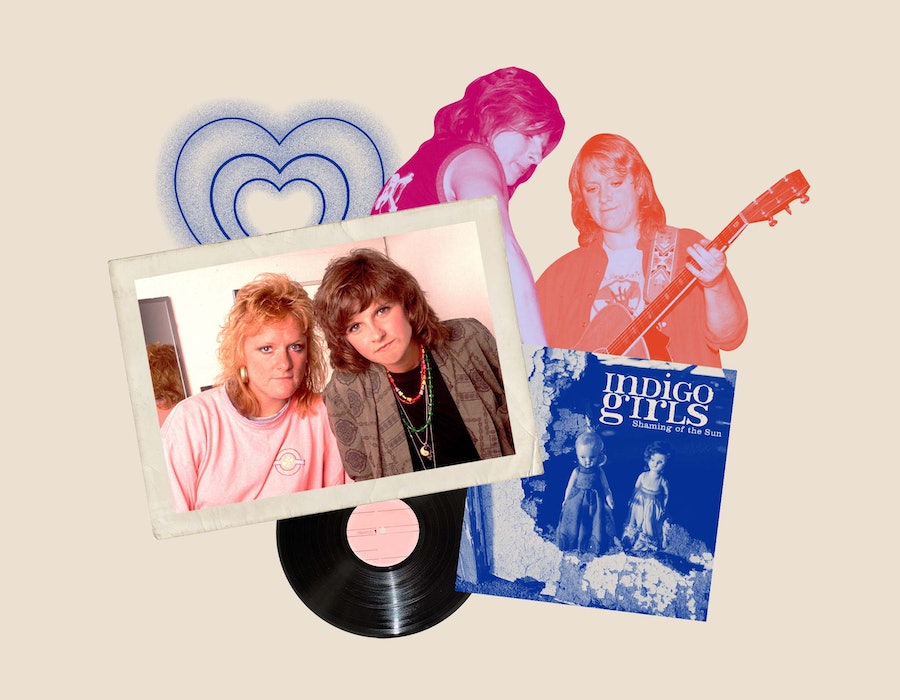 I saw the Indigo Girls perform live the same year I came out to myself. It was 2016; I was living in Iowa City and had, over the course of a college semester, fallen for a friend and classmate. I denied my feelings until I couldn’t any longer, then hid them from her until a shot of Jameson and a feeling of recklessness propelled me to an admission. She responded poorly. We attempted to draw boundaries to keep our friendship intact. We said goodnight. I didn’t sleep at all.

Our boundaries didn’t hold. After weeks of pretending everything was fine, I finally snapped, spilling my hurt and anger to her in another heated conversation. My sobs over the phone to my mom were enough to rouse my roommate from her room; she came out and wrapped her arms around me without knowing what was wrong.

Some hurts have more layers than others: A few weeks earlier, a friend of mine who, like me, uses a wheelchair, told me she thought it was easier for disabled women to date other women than men. “Girls are more open to different types of abilities,” she’d said. I don’t know the extent to which this is true, but I do know that internalizing this belief laid the groundwork for the rejection to hurt more and for my self-perceived worth to shatter. For months, the fallout was all I wrote about, trying to make sense of who I was by piecing together an identity I’d long embraced — my disability — with one I was still learning to inhabit.

Unpacking all of this is another essay. What’s worth acknowledging, though, is that underneath my internalized belief about dating as a disabled woman was the assumption that queer relationships between women never ended poorly.

That summer, I heard Amy Ray, one half of the Indigo Girls with Emily Saliers, perform the woeful rock ballad “Don’t Give That Girl a Gun” from their 1997 album, Shaming of the Sun. Ray’s growled lyrics made something inside me come undone: “She’s got a case against me, a jury of our peers, and the rage of the righteous screaming in her ears.” The narrator was claiming wrongdoing, at least to a degree. Queer women — the ones I loved, the ones I idolized — could be imperfect, even villains. I, in turn, could hold culpability in the fallout with my friend.

Ray’s song gave me permission to see queer relationships for what they were: sometimes messy, complicated, and painful — like any other relationship.

Now, 35 years since the release of their first full-length album, Strange Fire, the Indigo Girls are still articulating experiences into songs, and for a new generation of listeners. At its heart, this is what powerful art can do: show us a truth we hadn’t been able to pinpoint and give us words for experiences we haven’t yet made sense of.

The Indigo Girls rose to prominence in the late ’80s as a folk rock duo with a queer, political lens. Ray and Saliers, friends since childhood, started making music together at their high school in Georgia. They both came out publicly in 1988, a year after Strange Fire’s release, during a time when being anything but straight and cisgender was still viewed as an abomination or illness by the majority of our country.

Among my friends, an idealized but no less shallow view of romance between women persisted: Before coming out, I’d heard friends who were complaining about guys say, “God, I wish I liked girls. It would be so much easier.” I’d even said it myself.

“In my first queer relationship, I think that’s almost what destroyed me the most,” says singer-songwriter Katie Pruitt, who counts the Indigo Girls as mentors. “This illusion that now that I was with a woman, it was going to be perfect.” Pruitt idealized queer love growing up, she says, because she yearned for something she thought she wasn’t allowed to have.

The romanticization of women loving women is fed by many factors. “People associate men and masculinity with violence, and women with caregiving, loving, and gentleness,” says Rachel Marie-Crane Williams, Ph.D., the previous chair of Gender, Women’s, and Sexuality Studies at the University of Iowa. “[It’s a] very old holdover.” It’s a nice thought — that removing men from the equation would also mean an end to violence. Of course, it’s not true.

When bestselling author Carmen Maria Machado was conducting research for her memoir In the Dream House, which recounts her experience in an abusive lesbian relationship, she had difficulty finding documentation of romance between women as anything but magical. “Fantasy is, I think, the defining cliché of female queerness,” she writes in the award-winning book. “Acknowledging the insufficiency of this idealism is nearly as painful as acknowledging that we’re the same as straight folks in this regard: we’re in the muck like everyone else.”

When Ray and Saliers put Shaming of the Sun together, Ray was fresh out of a seven-year relationship. In the Indigo Girls’ Tumblr blog, Ray wrote that the record reflected “a lot of the transitions” in their lives at that time. In other words, the muck.

In the 35 years since their first album, they’ve released 20 albums together, been nominated for seven Grammy’s and won one, and had four albums go platinum. In the past few years, they’ve been recognized by mainstream institutions: In 2019 they were awarded the Pell Award for Lifetime Achievement in the Arts, in August they were inducted into the Women Songwriters Hall of Fame, and in September Brandi Carlile presented them with the “Spirit of Americana Freedom of Speech Award” at the Americana Music Honors & Awards.

But for most of their early career, they were written off or mocked by many mainstream outlets. When Shaming of the Sun was released in 1997, Rolling Stone wrote, “Indigo Girls may have their earth-sister charms, but they’ve yet to make music that’s rounded enough to reflect life in the real world,” and, wildly, “not every moony coed who strums a guitar in a campus coffeehouse grows up to be Bob Dylan or Joni Mitchell.” Even Saturday Night Live spoofed “Closer to Fine,” in a 2005 sketch replete with lesbian caricature such as plaid, mustaches, and environmental self-righteousness.

And yet, the Indigo Girls never had to be Dylan or Mitchell. They were creating a legacy in their own mold and already connecting with the listeners who needed them most.

When Brandi Carlile first heard the Indigo Girls’ music in 1995, she was 14 and immediately drawn to it. She saw them perform a few years later, and would ultimately tour with them throughout her 20s. “I made a spiritual beeline for their voices, intuitively recognizing something in it that I didn’t have a language for or couldn’t explain at the time,” she said at the Americana Music Honors & Awards in September. “[Their work] birthed me, and it informs every step I take as I walk through the world that the Indigo Girls built for me.”

And they’ve built this world — along with other queer singer-songwriters like Tracy Chapman, k.d. lang, and Melissa Etheridge — by opening doors that they “kicked open and held open” for future generations, says musician Allison Russell.

“Writing with nuance and candor about hard things, being unapologetically one’s self, being strong through vulnerability and honesty, I learned that from [the Indigo Girls] and from Tracy Chapman,” Russell says over email. “I was a Black, queer child being raised by severely abusive white supremacists. I felt their music like loving arms wrapped around me.”

“More than ever, people are really embracing their own stories and incorporating them into their art,” singer-songwriter Amythyst Kiah says over email. “There is no doubt that Amy and Emily had, and continue to have, a huge impact on that.”

Pruitt finds the entire way the band operates inspiring — not just their songs, but their activism as well. In 1993, Saliers and Ray co-founded an indigenous-centered environmental justice organization, Honor the Earth, with indigenous leader Winona LaDuke, and have consistently organized for reproductive, racial, food, and climate justice, as well as for queer liberation. This year alone, more than 150 anti-LGBTQ+ bills have already been introduced around the country. Courts have blocked some, but roughly 50 have passed or are being considered.

“The struggle for equality in our music scene, our ecosystem, this country is not going to be easily won,” Ray said in her acceptance speech at the Americana Music Honors & Awards. “Once Joan Baez said to me when we were talking about activism, ‘I’m not going to pass my torch to other people, I’m going to hang onto it, and I’m going to help others light theirs.’”

Last year, they performed on a pontoon boat in the middle of the Mississippi River to protest the construction of Line 3 pipeline, since they couldn’t be arrested in the middle of the Mississippi. (Line 3 was completed in October 2021, but efforts to mitigate its effects remain in full force.) In September, they helped organize a Water is Life festival and concert to benefit the continued battle. And throughout the fall, they campaigned for Georgia gubernatorial candidate Stacey Abrams.

“They are people that I want to emulate, not only as a musician, but as people,” says Pruitt. “They are so rooted in gratitude, community, love, and kindness. They’re just the OGs.”

Ray and Saliers’ commitment to their work is, in part, what allows musicians like Carlile to tell packed-to-the-brim audiences about her wife and daughters, and Russell to write songs laced with queer desire. It’s what allows Pruitt to release an album chronicling gay life, love, and heartbreak in the South, and it’s what allowed a listener like me to put the pieces of my own story back together.

When I saw them perform in 2016, I was taking my first, shaky steps out of the closet. It was beautiful, but I still hurt from the experience that had pushed me out of the closet in the first place. I’d played their song “Learned It On Me” from the 2015 album One Lost Day over and over in the months leading up to the concert. “I guess I should be happy, I’m the course that set you free, I just wish you hadn’t learned it on me,” Saliers sings. I soaked up the story of someone hurt by another woman, whom she forgave but didn’t forget.

Their newer music resonates too, like the 2020 song “Country Radio,” about a queer kid who longs for the type of love sung about in country music, while waiting to hear themselves represented in those stories. College-aged me needed this song. The current me still needs it. “Country Radio” demonstrates the transportive power of song and the human experience of yearning for something better. In the second verse, the narrator closes their eyes and surrenders to the music. “It’s like I click my heels, that’s me in the story and the story is real,” Saliers sings.

In their 35 years on the national stage, Ray and Saliers have given us stories to help us make sense of our own. It’s a powerful, life-changing gift, and still necessary in 2022. As Carlile said in September, “The Indigo Girls go where they’re needed, and we need them.” We did, and we do.

More like this
Marcus Mumford, Open Book
By Ilana Kaplan
Judy Greer Is The Main Character
By Anna Peele
Kim Kardashian On The Beauty Hack That “Changed My Life, My Skin, My Confidence”
By Taylor Jean Stephan
You’ve Been Singing The Wrong Lyrics To “All I Want For Christmas Is You”
By Sam Ramsden
Get Even More From Bustle — Sign Up For The Newsletter