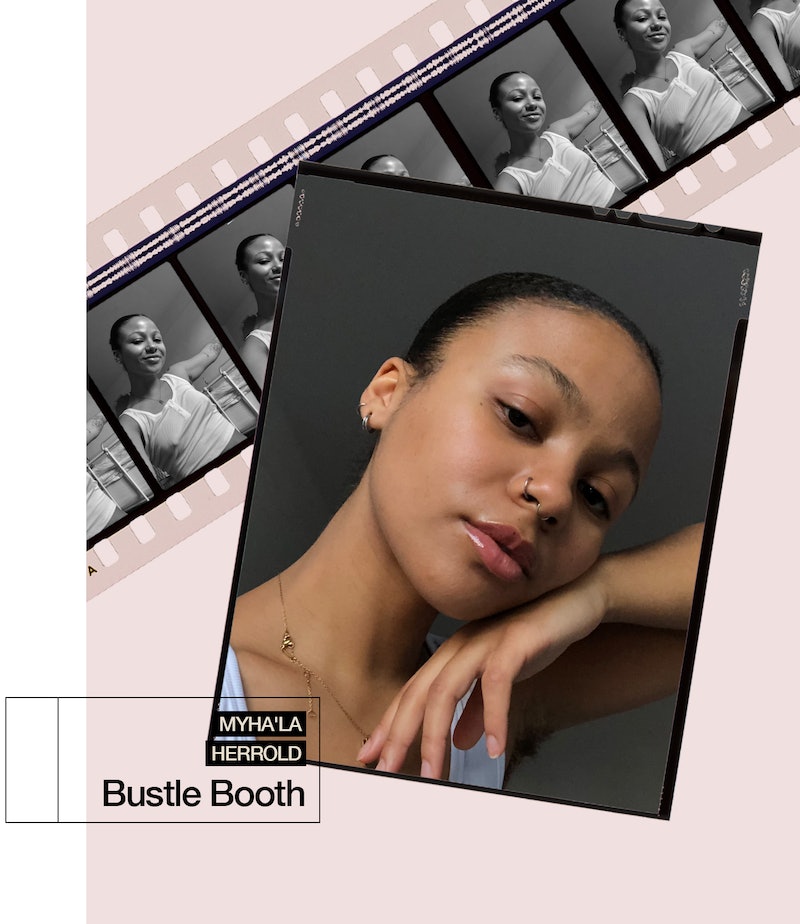 Don’t ask Myaha'la Herrold to explain the financial jargon in HBO's Industry. Despite shooting eight episodes of the new show centered on the lives of recent graduates competing for spots at a high pressure London investment bank, she couldn’t tell you what it means when her character Harper flubs a deal, and she certainly doesn’t plan on getting into investing for herself. But what she can tell you about — extensively — is the emotional engine of the show.

“It's a finance show, but it's not about the numbers,” Herrold says. “It's not about the money, it's not about trading. It is about how these young people navigate that environment, and their relationships with their superiors, their relationships to each other.” As Harper, a savvy Black American with a mysterious background, Herrold is calculatingly cool on the surface to belie a well of anxiety bubbling underneath. But it’s Harper’s constant drive to succeed that Herrold relates to most.

“I did feel a lot of responsibility to carry the show [and] lead it with grace and professionalism and respect and integrity,” Herrold says. A lot of that comes from being a Black woman in a world with “all these things stacked against her,” just like Harper. “Because I have lived with [institutional racism] my whole life — and so has she — you have a toolbox, and a little bit of hardened skin. We know we have to come in the room 110% more prepared and more capable than whoever it is that we are competing against.”

Not that Herrold hasn’t built up an impressive resume herself. She got into acting at a young age and never looked back, taking every opportunity she could with her local community theater in San Jose, California. “I just went through my young life being like … I'm just going to put myself in whatever position it is that I can continue to do these things that I love,” Herrold remembers.

Even still, getting into TV was a surprise. She stuck to theater while studying acting at Carnegie Mellon University, then made her Broadway debut as Nabulungi in The Book of Mormon. Industry is her first foray into television, but in hindsight she feels it was a logical one. “So much of my time at school people were like, ‘Myaha’la, you have to be bigger, you have to be louder. We can't see you in the back row.’ And I was like, ‘But I'm feeling it. I don't understand!’ ... But the camera catches all those things.”

Now she’s embracing the opportunities TV provides to use her gifts to benefit and represent her community. “As an industry, it has moved at a quicker pace than theater. So there's more stories that I can relate to, more queer stories, more stories of Black people, more stories of young people … I really feel like I found a niche there.”

Get to know more about Myaha’la in her Bustle Booth questionnaire below.

I'm a tea drinker! Earl grey with a splash of almond milk and a lil honey

The Undoing on HBO!

Ariana Grande. But I hope we'll be friends one day.

The leadership, organization, and imagination I have seen among organizers and individuals in my community and across America to create resources, infrastructure, and opportunities for themselves and their community outside of those provided by our government. "Who keeps us safe? We keep us safe!"

I'd like, and I hope, that people say that I am a person of integrity; in my work and in my life. Also, that I'm fun!

More like this
'Grey's Anatomy's New Intern Got Advice From Dr. Bailey Herself
By Grace Wehniainen
On 'The Handmaid’s Tale,' Christine Ko Fights Back
By Gretchen Smail
Ismael Cruz Córdova Loves His Elf Ears
By Morgan Leigh Davies
Harry Lawtey Is Weighing Up The Price Of Success
By Olivia-Anne Cleary
Get Even More From Bustle — Sign Up For The Newsletter