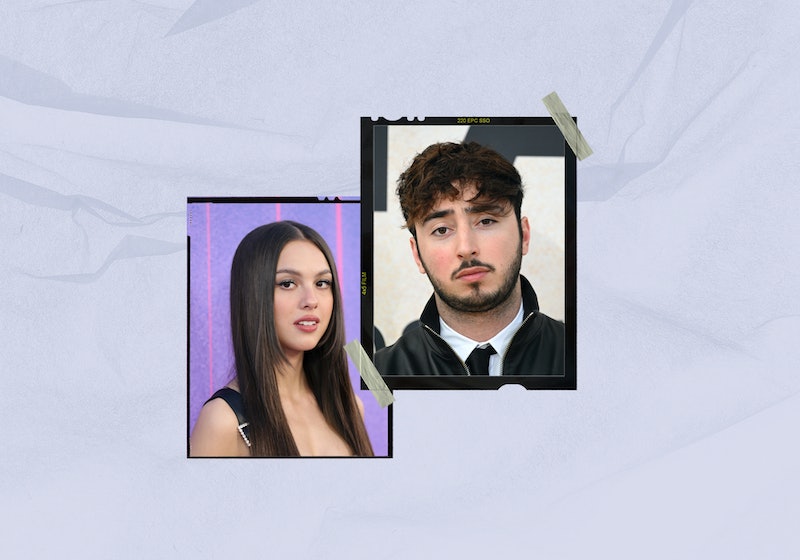 At the 2022 MTV Video Music Awards, Olivia Rodrigo has the chance to take home as many as four awards — Best Pop (“traitor”), Best Editing (“brutal”), Best Longform Video (driving home to u), and the coveted Video of the Year (again, “brutal”). With so much to celebrate, you may be wondering: is Rodrigo dating someone who will cheer her on? While Rodrigo undoubtedly has plenty of support from fans and famous friends, it looks like a boyfriend may not be part of the picture.

Anyone who’s heard her heartbreaking ballad “drivers license” knows that the 19-year-old has been somewhat unlucky in love, as the song’s lyrics detail a tough breakup and paint a picture of Rodrigo driving past her ex’s house after their devastating split. Now that time has passed since that song’s release, it looked like Rodrigo was moving on with someone new — Zack Bia, that is, a 26-year-old DJ that Complex described as “the Forrest Gump of the social media era.” He previously dated Madison Beer for nearly one year, People reported, and told GQ that he considers Drake “a big brother” after working at one of the rapper’s parties and eventually developing a close friendship.

In April, a source told E! that Rodrigo and Bia had been “seeing each other” since the Super Bowl, when Rodrigo attended parties where he was performing. “They hit it off and have been casually hanging out.” The source added that “Zack [feels] that Olivia is really down to earth and he loves how low-key she is.” People confirmed the relationship in June.

However, as Life & Style reported on Aug. 20, it seems that Rodrigo and Bia broke up recently. “Their relationship sort of fizzled,” a source told the magazine, adding that “they were casually dating but haven’t spent time together in a while.” Us Weekly confirmed the report.

Until Bia, Rodrigo’s most recent rumored boyfriend was 24-year-old film producer Adam Faze, but the pair reportedly split sometime between December 2021 and February 2022 after about six to eight months together. “They’ve been over for a bit now,” a source told People. The “deja vu” singer was first spotted with Faze holding hands at the Space Jam 2 premiere at Six Flags Magic Mountain in June. “They were really cute together and weren’t trying to hide their affection at all,” a source told E! News. “The two of them together felt comfortable and newish,” said E! entertainment reporter Stuart Brazell. “It seemed like he also knew a lot of people there. It just felt like comfortable, cuddly, new young love.” About two weeks later that summer, they were photographed kissing for the first time.

As the summer progressed, their bond only got stronger. On Aug. 27, the duo was spotted holding hands on a date in Los Angeles. Between their makeout session on the car and their other public displays of affection, they made it very clear that they were together. However, breakup speculation started to bubble up around New Year’s Eve, when she was spotted celebrating with her longtime pal Conan Gray instead of Faze. Page Six reported that Rodrigo unfollowed Faze on Instagram in January, and in a December 2021 interview with Vogue, she spoke about what she’s learned about moving on from a breakup. “Besides cutting off all contact, I think it’s important to not only forgive them, but forgive yourself for letting everything happen,” she said. “That’s what I’ve learned.”

It’s entirely possible that fans will get more information about their split when Rodrigo releases new music. Shortly after the release of “drivers license” — which was No. 1 on the Billboard Hot 100 for eight weeks and inspired an entire SNL skit — rumors surfaced that her debut single was about her ex-boyfriend and HSMTMTS co-star Joshua Bassett. The duo never publicly confirmed that they were dating, but rumors ramped up after the series premiered on Disney+. They further fueled dating speculation by frequently appearing on each other’s Instagram feeds.

Despite never confirming their relationship, Rodrigo hinted at heartbreak on social media. In August 2020, she posted a TikTok of herself eating a muffin while listening to “All I Want” from HSMTMTS and wrote, “And that’s on failed relationships.” Shortly after, Bassett was spotted out with Girl Meets World star Sabrina Carpenter. And considering the “drivers license” lyrics nod to a “blonde girl,” fans assumed that Rodrigo was throwing shade at Carpenter and that the three stars were involved in a very complicated love triangle.

Things got even messier when Bassett released a song called “Lie Lie Lie” roughly one week after “drivers license” came out. Initially, fans thought it was a rebuttal. But Bassett quickly shut down rumors that the track was about Rodrigo at all. “I wrote ‘Lie, Lie, Lie’ after I found out a friend had been lying about me behind my back for a long time,” he wrote on his Instagram story. “It always hurts to hear that someone you thought you could trust would throw you under the bus when it benefits them. It happens to all of us, and I think all you can do is seek out people that build you up rather than tear you down.”

Inevitably, some fans didn’t believe Bassett’s explanation. Others thought that if “Lie Lie Lie” wasn’t about Rodrigo, perhaps “drivers license” wasn’t about Bassett. But if not Bassett, then who? Well, the singer previously dated her Bizaardvark co-star Ethan Wacker. Their relationship began in 2018, but the two called it quits about a year later. The chances that the song is about him are slim, though. When one fan on TikTok speculated that Rodrigo was singing about Wacker, he set the record straight. “Nope. I treated her well,” he wrote.

Apart from those two relationships, there’s been additional speculation that Rodrigo may have dated Conan Gray. The rumors first started when the young stars helped tease some re-recorded tracks from Taylor Swift’s Fearless album. Interestingly, Rodrigo had already addressed the status of her relationship with Gray in a March interview with Roman Kemp on Capital’s Breakfast Show. “Conan’s a friend of mine, and the guy who produces most of my music produces most of his,” she said. “We’re just pals and I think he’s so brilliant.”

From the Grammys to her first-ever tour, the singer likely has no time to look back at old relationships. When the nominations were announced in November of last year, Rodrigo immediately took to Instagram to express her gratitude. “Woke up this morning to 7 Grammy nominations,” she wrote alongside a cake that said “you did it b*tch!” in blue icing. And after reminiscing on what the Grammys meant to her when she was younger, she thanked her fans for their support and the Recording Academy for recognizing her work.

“Many dreams have come true for me this year but this one is probably the most meaningful,” she wrote. “Thank you to everyone who has believed in me and supported the songs I write. And thank you to @recordingacademy for the recognition. I’m beyond humbled. Truly a day I will never forget. So grateful.”

More like this
Everything To Know About The 2023 Grammy Awards
By Jake Viswanath
Selena Gomez Confirms She's Single Amid Drew Taggart Dating Rumors
By Martha Sorren, Jake Viswanath and Jack Irvin
Michael B. Jordan Tackled His "Public Breakup" With Lori Harvey On 'SNL'
By Brad Witter
Who Is Pete Davidson Dating? He & Chase Sui Wonders Got Caught Kissing
By Jake Viswanath
Get Even More From Bustle — Sign Up For The Newsletter
From hair trends to relationship advice, our daily newsletter has everything you need to sound like a person who’s on TikTok, even if you aren’t.

This article was originally published on May 7, 2021