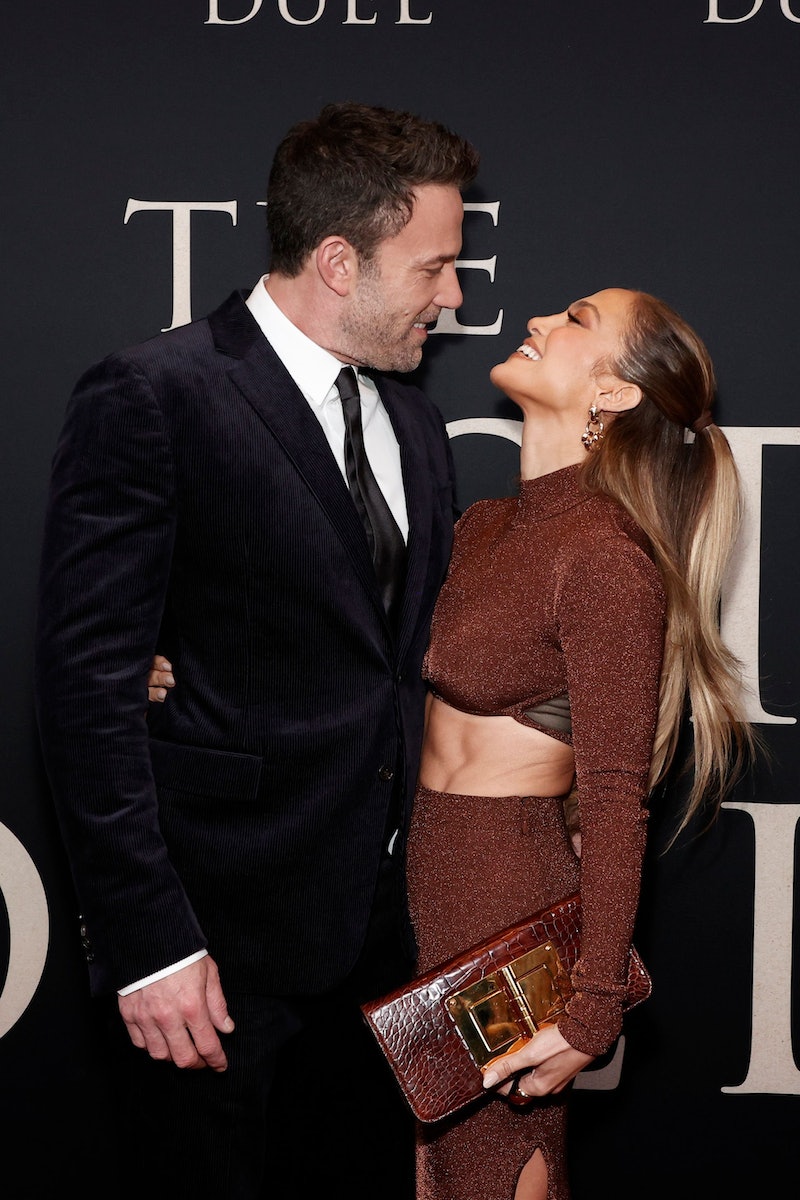 Jennifer Lopez and Ben Affleck sightings have become a fairly regular occurrence since their reunion this spring, but seeing their mutual support of each other is still special. The singer accompanied her actor-screenwriter boyfriend to the New York premiere of his latest film, The Last Duel, on Saturday, Oct. 10, and she later shared some photos of the “red carpet magic.” In one particularly sweet snap, J. Lo stood out of the spotlight and leaned against a pillar as she let him do his thing.

Lopez, of course, had her chance to shine over the course of the night. Ever the icon, she posted video from her arrival on her Instagram, appropriately adding Drake’s “Way 2 Sexy” (feat. Future and Young Thug), and then followed it up with two carousels, including photos of her behind-the-scenes moments. The singer looked gorgeous in a brown, sparkly Herve Leger set that consisted of a long-sleeved crop top and a fitted skirt with a thigh-high slit. Her midriff was a highlight for many of her followers. “ABS THO,” one commented, while another added, “Those abs.” Naturally, fire and heart-eyes emojis also filled her replies.

In the photos that showed her supporting Affleck from the sidelines, Lopez gave a look at her point of view, almost making it feel as though followers were right there with her. “Red carpet magic,” she wrote, tagging Affleck’s movie.

While it was Lopez who brought her outfit to life at the premiere, she had help from stylists Rob Zangardi and Mariel Haenn; her hair, makeup, and nails came courtesy of Mary Phillips, Lorenzo Martin, and Eri Ishizu, respectively. Their work got approval from multiple stars, with actor Madelaine Petsch’s reply to Zangardi’s post showing it off saying, “So much yes to her outfit.” Fashion designer Rachel Zoe also chimed in, replying with six fire emojis.

The rekindled Bennifer romance also brought Lopez to the world premiere of The Last Duel last month, which marked her first red carpet appearance with Affleck in 18 years. The support goes both ways, though. While they were in Venice for his event, they also celebrated Lopez’s 52nd birthday, in part with a J. Lo-centric bikini photo shoot that Affleck made a cameo in to go Instagram official.

Even during the many years the couple was apart, the two-time Academy Award winner was quick to support his then-ex. In April, Affleck had glowing things to say about Lopez when he was interviewed by InStyle for her May cover story, including that he was “completely humbled and blown away” by her hard work. More recently, he told Adweek that he’s “in awe” of her and the impact she’s had.

For many reasons, their partnership has delighted fans. The couple even got the approval of Kim Kardashian (not that they needed it) when the reality star took the time to share one of their Venice International Film Festival photos to her Instagram story in September, writing, “Long Live Bennifer.” Fingers crossed that they’re built to last this time.

More like this
Harry Styles’ Red Carpet Looks Have One Thing In Common
By El Hunt
Meghan Markle’s Outfit Paid Tribute To The Queen In More Than One Way
By Shahed Ezaydi
Who Is Nick Cannon Dating & How Many Kids Does He Have?
By Jordyn Tilchen and Radhika Menon
Hailey Bieber Just Responded To *That* Viral Met Gala Moment
By Radhika Menon and Sam Ramsden
Get Even More From Bustle — Sign Up For The Newsletter