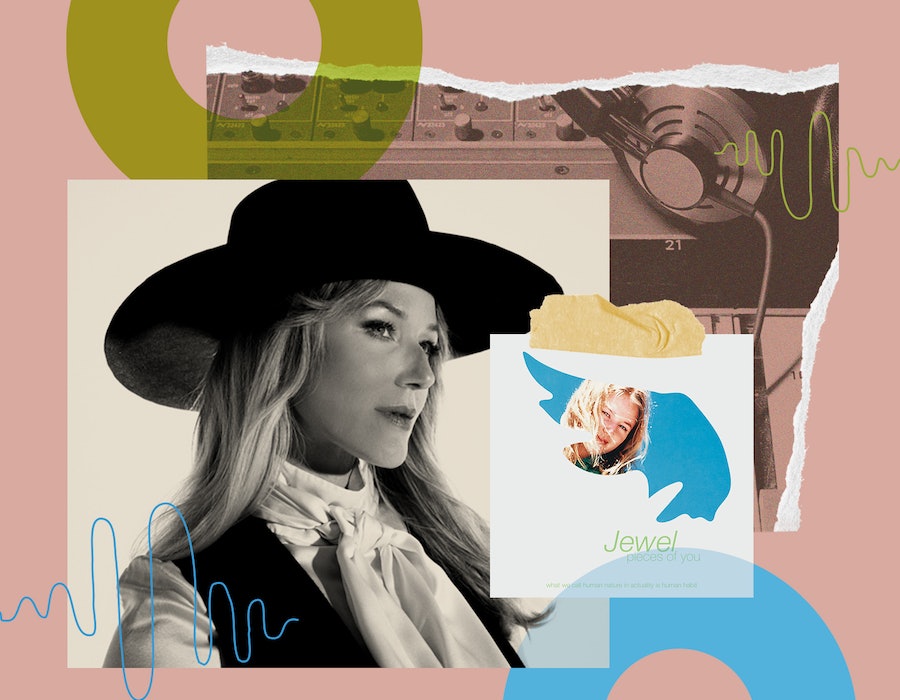 When Jewel was a 16-year-old boarding school student in Michigan, there was one spring break that she wasn't able to make the journey all the way home to Alaska. Instead, she spent the vacation train-hopping and hitchhiking her way across the US and Mexico, writing songs along the way. “It was on that trip I wrote ‘Who Will Save Your Soul,’” Jewel tells Bustle. “I'd always written poetry and short stories and I'd always sung, but I'd never combined the two. I started songwriting [on that trip] and was pretty much obsessed with it.”

"Who Will Save Your Soul" would go on to be the first release off Jewel’s classic 1995 folk album Pieces of You, which came out when she was 21 years old. While the album has now sold millions of copies worldwide, it wasn't exactly an overnight phenomenon. “I took a lot of risks to make an honest, very simple folk record at the height of grunge,” Jewel says. “I had to [be] authentic, that came above popularity, above anything else.” Jewel worked hard promoting the album, performing at every coffee shop and open mic night she could find, but it didn't lead to monetary success.

“I ended up homeless, living in my car because I couldn't pay rent, and then the car got stolen. I was having anxiety attacks, I was agoraphobic, I was shoplifting a lot and I realized I would die or end up in jail if I didn't figure something out,” Jewel says of that period of her life. Writing songs became her way out. "To break myself of shoplifting, I tried to create a new habit of writing. Every time I felt stimulated to steal I would make myself sit and write. I probably wrote five songs a day back then." It was in the height of her writing that things finally started looking up. By chance, Bob Dylan heard Jewel singing in a coffee shop and invited the little-known singer-songwriter to open for him on tour. Luck was finally on her side.

While Jewel's story is a remarkable one, the 46-year-old isn't one to romanticize it. Instead, she remains laser focused on the work. These days, she's dedicated to her emotional fitness community Never Broken, has been writing new music, and just released a reissue of Pieces of You in honor of its 25th anniversary. "I was so honest on that record. People really got to see me for who I was,” Jewel says of reflecting on it over two decades later.

Below, Jewel muses on her love of Pink Floyd, Anaïs Nin, and the song she can't believe she wrote at 16.

On Revisiting Pieces Of You & Cringing At Her Teenage Self

“Pieces of You” has been out in the world for 25 years. How has your relationship to that album changed over time?

I don't listen to that record. I don't even know if I listened to it at the time because I never really liked hearing myself sing. I [have been] preparing to do a live stream of the entire album. I'm surprised by what I was writing. It didn't seem that interesting or extraordinary at the time, but looking back I can't believe I wrote the song “Don’t” when I was 16. I didn't have a boyfriend and I wasn't in love. Now that I’m older I'm like, “How did I do that?”

How did you feel about yourself and your career then?

I was isolating myself. I didn't really tell the truth. You say you're fine, you smile, and you don't tell people you are homeless. But once I got on stage I sang these incredibly honest, gut-wrenching songs, and I told the truth. The people in the audience didn't chastise me. They were like, "Oh my god I didn't know anybody else felt that way." I felt connected and I didn't feel ashamed. I [realized], "You know what, I’m not perfect but I'm not unlovable."

How has it felt to revisit this record and this difficult period in your life?

I recorded this album mostly live at a coffee shop, but I have records of full shows [from that time]. It was hard for me to listen to, it's like seeing your most awkward teenage photo, where you have bad bangs and your eyes are half open, come to life and talk to you for an hour. Everything that entered my 18-year-old brain is on that recording. But it's a good snapshot and I knew it was something fans would really like, so I got over my cringe factor.

On Pink Floyd & Poetry's Influence On Her Music

What was the first album you ever bought?

Was it informative listening to Pink Floyd at such a young age?

I always liked deep, moody music my whole life. I was raised in Alaska without a lot of electricity, so I was behind on the pop culture that other kids got. I liked Cole Porter the Ella Fitzgerald Song Books. His writing and her singing were pretty incredible. But I was more of a reader.

What were you reading as a kid?

I was reading a lot of Greek philosophy and I started getting into the poets then, too. Plato's "Allegory of the Cave," Socrates, Pablo Neruda, Bukowski, Anaïs Nin, and Nabokov's short stories. It definitely affected how I write songs, it's why I use so much color and imagery.

Are you writing anything now?

I just wrote a new album. I wrote 200 songs to get the 12 or 14 I’m using. It's different now as a mom because you have to create a schedule. You're not up at three or four in the morning, you write between x and x time. It's a very different skill set to get yourself to be raw and creative in a set schedule like that, but you get it done. You adapt.

More like this
Even If She Tried, Beth Ditto Couldn’t Stay Away From Music
By Ivana Rihter
Ramin Djawadi Is Living Out His Dreams
By Rebecca Long
Everything To Know About Taylor Swift’s 10th Studio Album, 'Midnights'
By Grace Wehniainen and Jake Viswanath
What Demi Lovato Really Thinks About Child Stardom, Depression, & Sobriety
By Radhika Menon
Get Even More From Bustle — Sign Up For The Newsletter