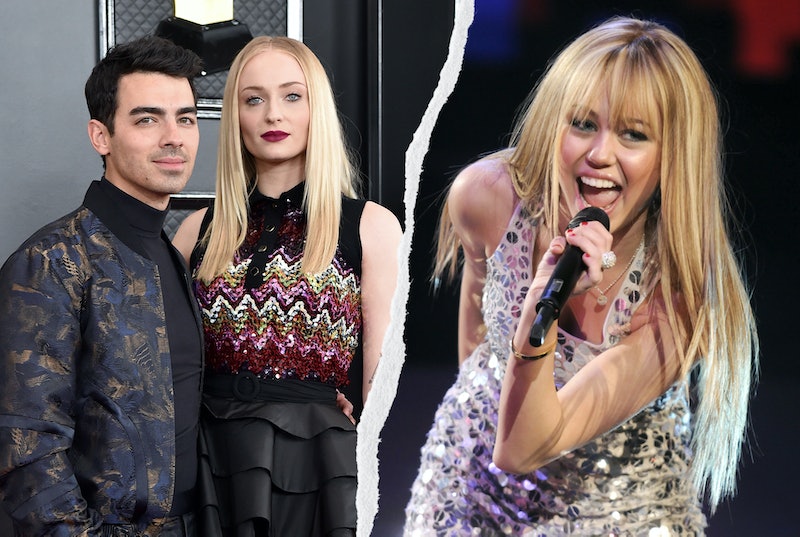 Hannah Montana may not be as good at keeping secrets as we originally thought. On Wednesday, March 24, Miley Cyrus sent Joe Jonas and Sophie Turner an enormous flower arrangement to celebrate the show’s 15-year anniversary. But along with the flowers came a note that made fans everywhere rethink whether or not the couple’s daughter is named Willa, as several news outlets reported soon after her birth.

It all started when Jonas posted a video of the arrangement to Instagram, clearly not thinking that fans would absolutely pause and zoom in on the card. “To: Joe & Sophie! It was so sweet of you to name your daughter after me!” the note read. “Sending all my love to little Miss Hannah Montana! Love, Hannah Montana.” Of course, this brief message raised a ton of eyebrows among die-hard fans of the former Disney Channel stars. And it also left many wondering if the baby — who the pair welcomed in July 2020 — is actually named Hannah.

“I’m so confused I thought their daughter was named Willa?!” one fan wrote on Twitter upon seeing screenshots of the note. “I didn’t know Joe and Sophie named Willa after Hannah Montana,” another fan tweeted. Several other people on social media echoed those same sentiments, trying to make sense of Joe and Sophie’s daughter’s name and how exactly it connects to the beloved Disney character.

While neither Joe nor Sophie have confirmed that this theory is correct, it’s a well-known fact that the Game of Thrones star is a huge fan of the hit Disney series. In December 2020, she shared a photo to her Instagram stories of a Hannah Montana t-shirt that Joe gifted her for the holidays. “Thanks to the hubbs of the year for my early Christmas gift,” she captioned the picture, tagging both Joe and Miley in the post. “Yassss @sophiet,” the pop star responded. Clearly, Sophie’s love for Miley and Hannah is mutual.