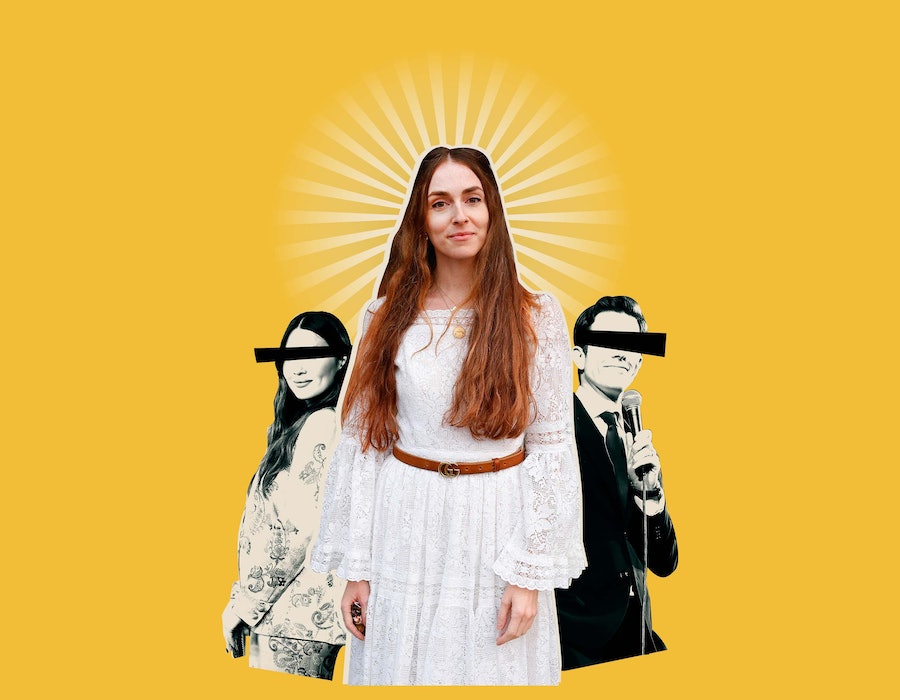 When I started my TikTok account earlier this year, the algorithm filled my feed with content it knew I would enjoy: small dogs, inexplicably compelling dance moves, cakes being frosted. Within a few swipes, I came face-to-face with a person I recognized. It was Anna Marie Tendler, the ex-wife of the former internet darling-turned-celebrity-shitshow John Mulaney.

“Hello, and welcome to my first ever TikTok,” Tendler began. The video was shot in a sage-colored room with sumptuous tapestry-style wallpaper. Tendler, wearing glasses and a messy bun, gave us a tip for how to put a duvet cover onto a comforter.

I instantly followed. I was used to TikTok feeling like a hellhole of children born after the movie Shrek came out, dancing to songs I didn’t recognize. Seeing a familiar face was like running into a childhood friend in a foreign country. Of course, I don’t actually know Anna Marie Tendler; we have never met, or interacted in any way. I know her because I have been a longtime fan of her ex-husband’s.

John Mulaney’s standup has always been very personal (or at least, it feels very personal). He’s mastered a mode of delivery that makes it appear that he’s sharing secret observations with his (millions of) closest friends. Tendler was a central part of that persona, so when it fell apart — first with his sudden announcement of his separation from his wife after a stint in rehab, and then with the even more sudden announcement that he was expecting a baby with Olivia Munn — the internet felt betrayed.

I certainly felt it — I also just felt like I was interested in some juicy celebrity gossip because my life after nearly two years in lockdown was becoming very boring — but some people on the internet thought that was weird. Through the Twitter fracas a fancy-sounding term emerged to condemn this weirdness: “parasocial.”

There is nothing more compelling than a mystery, and I admit that I am fully enthralled by the enigma that is Anna Marie Tendler.

I’ve listened to him reference his Jewish wife in his standup routine for years and have gone down multiple rabbit holes trying to figure out everything about her, which is surprisingly difficult. There is nothing more compelling than a mystery, and I admit that I am fully enthralled by the enigma that is Anna Marie Tendler. WHO IS SHE?

She now describes herself as an artist, but she had a former life as a makeup artist and hair stylist, even releasing a book (as Annamarie Tendler) with makeup tutorials. She had another book on hairstyles you can make with bobby pins. She makes and sells lampshades and woven tapestries. She attended graduate school for costume studies. I have no idea how she makes a living.

Anna’s Instagram is a beautiful riddle of artistic photographs, many featuring Tendler herself looking slender and pale as a Tim Burton character, usually in some eerie setting — a graveyard, a wallpapered room, a field. Her references are erudite — her photographs are modern memento mori; she once recreated a portrait of Anne Boleyn. I can’t help but be compelled by her, first for the obvious reasons: because she represents the beauty standard I’ve been trying to achieve since I was about 10, but also because she’s a mystery. There’s nothing more compelling than a missing piece.

Social media sometimes has the effect of removing all mystery. Instagram reveals the interiors of people’s homes, their outfits, their friends, what they’re doing at any given time. Twitter shares all of our most mundane thoughts. TikTok fills in the rest. Yet somehow, even though my “relationship” with Anna is exclusively through social media, I feel like she is completely unknowable. Every one of her photographs ignites about a dozen questions in me: How long did this take to set up? Are you using a tripod or is someone helping you? How much do you think about social media? Where did you get those deer antlers? But ultimately, the only question is: What are you actually like? Because if John Mulaney’s last year has taught us anything, it’s that the people in the public eye that we think we know might be very different in their actual personal lives.

Anna Marie Tendler has curated a very specific identity for herself through her social media — the beautiful waif with excellent taste in wallpaper. I want to know everything about her in the way that I once wanted to know exactly where the coolest girls in school shopped: not to imitate them, necessarily, but just to understand. If nothing else, after the year she had, I would love to buy her a drink. I’m guessing… mulled wine served in a skull with a single dahlia bloom floating on its surface?

More like this
Everything You Need To Know About Kanye's Post-Kardashian Dating Life
By Bustle Editors
Shakira’s Record-Breaking New Song Takes Direct Aim At Her Ex Gerard Piqué
By El Hunt
Gemma Atkinson & Gorka Márquez Are Strictly The Sweetest Couple
By El Hunt
John Corbett's Wife Bo Derek Once Revealed If She's Team Aidan Or Team Big
By Alyssa Lapid
Get Even More From Bustle — Sign Up For The Newsletter
From hair trends to relationship advice, our daily newsletter has everything you need to sound like a person who’s on TikTok, even if you aren’t.