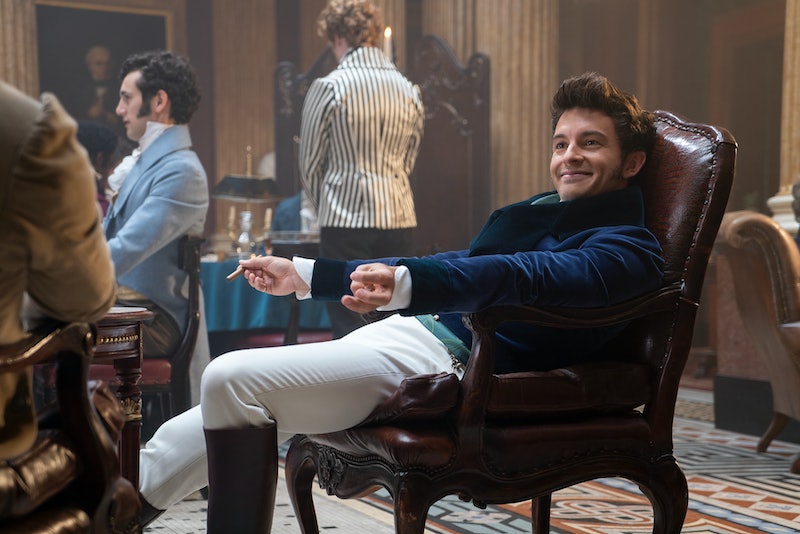 Fans of Julia Quinn's Bridgerton novels will likely be delighted by the Netflix show's upcoming second season — especially if they're hungry for more references to the books. In a new interview with British Vogue, star Jonathan Bailey promised that Season 2 of Bridgerton will have "loads" of Easter Eggs related to the best-selling book series. "I feel like the campy, plush spectacle of the Bridgerton world is only going to get more pronounced in the best way possible," the actor said when asked about the recently announced second season.

"It's mad, and it's brilliant. There are also going to be a lot of brilliant characters introduced in this series — and it's not just Anthony that we're going to delve into," Bailey continued. "The robust universe that's been set up by Shonda [Rhimes] and Chris [Van Dusen] will just expand and keep pushing boundaries in a way that's quietly subversive," he said. "There's just going to be more of what everyone loves, I think."

That includes "loads of little Easter eggs for all of the characters" that readers will recognize. "I'll say this: watch out for the bees," Bailey added, a nod to his character Anthony's phobia and the way it brings him and his future wife Kate Sheffield together in the books.

While Bailey still won't say whether or not Kate will appear in Season 2, he has confirmed that the upcoming episodes will continue to follow the trajectory laid out in Quinn's books. "I think Chris Van Dusen has got this amazing ability to take Julia Quinn's extraordinary books and her amazing worlds that she delicately filled with excitement and sexiness. And he takes it to a whole other level," Bailey told Entertainment Tonight in January. "So the fact that we're following Anthony's pursuit for love shows that you know there's definitely going to be some similarities [to the book]."

Regardless of who Anthony falls in love with in the new episodes, Bailey is hoping to finally see the eldest Bridgerton brother grow more comfortable with his emotions, as well as with his role as the viscount. "I sort of feel really sorry for him," the actor told ET in December. "I think he means really well. No doubt that he'll still be there to try to protect people in the way that he does and probably fail miserably. But yeah, we need to see him smiling. I think bigger hair, longer mutton chops, and hopefully get him on the dance floor [in Season 2]."

And while Season 2 will likely center on Anthony and the plot of The Viscount Who Loved Me, fans can expect his younger siblings to get plenty of their own scandalous storylines. "There's so many cliffhangers," Bailey told ET about all of the possible new storylines. "Eloise will be having her first season, I'm sure. There's head over heart with Benedict and his love of art. And there's a lot to really explore with Violet and Colin and Penelope. There's so much ... This is only the beginning."

One character who will likely take a back seat in the upcoming seasons, however, is Daphne (Phoebe Dynevor), whose love story with Simon, the Duke of Hastings (Regé-Jean Page) was the centerpiece of Season 1. "I love that [Daphne’s] story ends really nicely; it's all tied up at the end," Dynevor told Town & Country in December. "Now, I have a feeling that she's going to have to get involved with Anthony's love life, since it's his turn next. I'm a hopeless romantic, so I'm all for the happily-ever-after ending."

More like this
Nicola Coughlan Shared A Lady Whistledown Excerpt From ‘Bridgerton’ Season 3
By Grace Wehniainen, Alyssa Lapid and Sam Ramsden
Nicola Coughlan Addresses 'Bridgerton' Season 3 Backlash
By Sam Ramsden
Devi Is Going To Meet A “Smoldering Bad Boy” In ‘Never Have I Ever’ Season 4
By Jack Irvin and Gabrielle Bondi
Netflix Reveals First Look At Wednesday In The 'Addams Family' Spinoff Series
By Bustle Editors
Get Even More From Bustle — Sign Up For The Newsletter