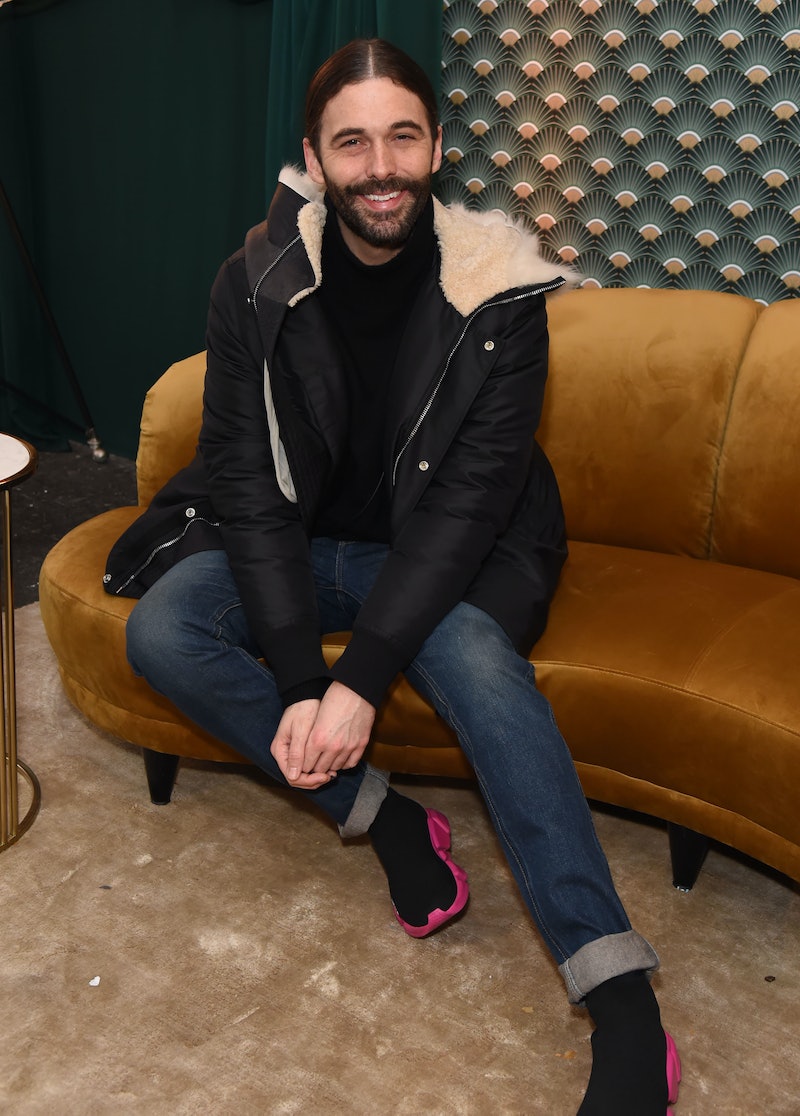 Ever since Bridgerton waltzed its way onto Netflix (and casually became the streamer's biggest show ever), fans haven't been able to get enough of the Duke, Daphne, and analyzing all those Easter eggs that point to Lady Whistledown's true identity. Like many of us, Jonathan Van Ness is obsessed with the Regency romance. Unlike many of us, he just so happens to be close friends with Penelope Featherington herself, aka Nicola Coughlan. And he has big ideas for her character come Season 2 and is excited about getting back to his own Netflix show, Queer Eye.

Van Ness spoke to Bustle ahead of his keynote speech at the virtual Create & Cultivate Polka Dot Summit on Feb. 27, which celebrates Disney sartorial icon Minnie Mouse and modern trendsetters who embody "bold, unapologetically positive" vibes. (The summit also features voices such as activist Ashlee Marie Preston and black-ish star Marsai Martin.) "I just felt such an honor to be in the same category as Minnie," he gushed before praising his fellow speakers. Intended to foster a sense of community during the pandemic, Van Ness is grateful to "radiate positivity" and inspire others through this event. "Thank you so much to Create & Cultivate for putting on this gorgeous summit," he began before adding, "They’re stepping up to create these summits so that people can connect with each other."

And speaking about Shondaland's latest hit, Van Ness said he wants "a stunning, gorgeous suitor" for Penelope in Season 2 of Bridgerton. He said, "I just want to see her really thrive. I want to see her meet a man who wants to treat her how she deserves to be treated. That would be really fun. I want to see Pen get swept off her feet."

Van Ness and Coughlan connected on Instagram and became fast friends, Coughlan told Bustle in December. They met and hung out together well before lockdown but have kept their friendship strong via Zoom trivia. Also signing on for quiz nights is Van Ness' aunt, who he says quickly befriended Coughlan herself. Naturally, it was especially thrilling for him to watch his aunt discover how Penelope's storyline unfolded.

Though Van Ness had already read the Bridgerton books to learn more about his friend's role, his aunt had no idea what was coming. He FaceTimed with her while watching to see her shocked reaction. "I’ve never seen in all my years my aunt make that face," he said, comparing it to a football fan watching their team score a touchdown. "I mean, I thought she was gonna flip her coffee table over."

Bridgerton fans know Coughlan will play quite an interesting role in Season 2 — but until then, Van Ness says he's prepared for whatever Shondaland has in store. "I have my popcorn ready, I have my favorite house slippers ready, I’ve got my five cats ready. We are all ready to snuggle and, like, watch Bridgerton for ten hours."

Of course, Bridgerton isn't the only Netflix original Van Ness is a fan of — he's got his own to think about, too. Approaching a year of quarantine means that it's also been nearly just as long since production paused on Queer Eye Season 6, which takes place in Austin, Texas. And Van Ness is looking forward to getting back to work, especially following the state's recent weather emergencies. "I think especially in light of what’s going on in Texas now, there’s gonna be a lot of homes that need help, a lot of people that need help. So I think we definitely have our work cut out for us," he stated. "Texas needs some love and needs some hope and some TLC. It’s been a really difficult time for everyone there, and I’m really excited for us to be able to get back when it’s safe enough to. And there’s definitely plans for us to do so."

Though Netflix has yet to announce a release date for Queer Eye Season 6, there's certainly a lot for Van Ness (and viewers) to look forward to in the near future. In the meantime, he's celebrating Minnie Mouse and her message for the modern era.

"It’s been an incredible experience. I’m so grateful," he said. "And go Minnie, honey! Because we need fierce ladies who can be boldly themselves, and non-binary and gender-nonconforming people who are out in the world and are thriving. And I think Minnie being a part of us celebrating that, I think is just awesome."

The Create & Cultivate Polka Dot Summit kicks off on Feb. 27 at 9 a.m. PT. Guests can RSVP here to receive the attendance link.