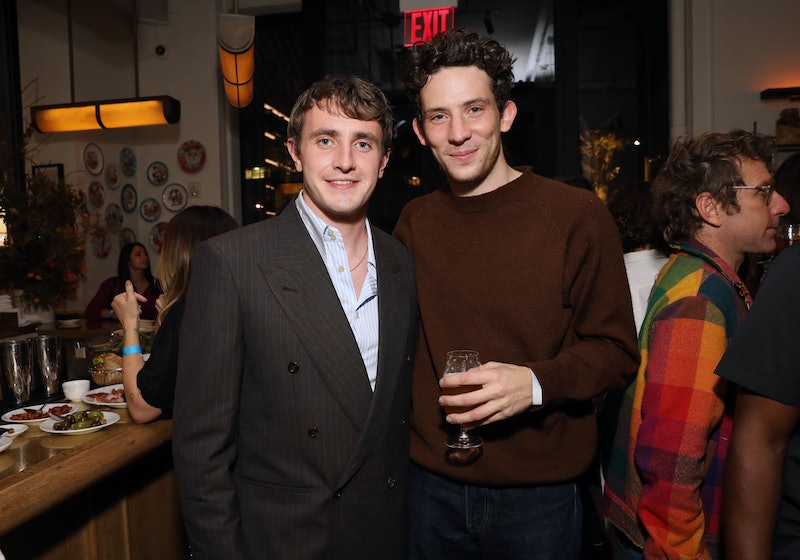 If you were watching buzzy, prestige TV in 2020, you might’ve fallen in love with Paul Mescal and Josh O’Connor (and probably even Connell, too, though definitely not Prince Charles). Hulu’s Normal People and Netflix’s The Crown helped catalyze collective crushes on both of the leading men — and now, we’re being gifted with even more to swoon over. This time, O’Connor and Mescal are teaming up for a film of their own. Cue the “most ambitious crossover event in history” meme.

After starring in respective shows about complicated relationships, O’Connor and Mescal are set to star in their own love story in The History of Sound. As reported by Variety on Oct. 29, the film is a gay romance set during World War I, based on a short story by Ben Shattuck that you can read online via The Common. Shattuck, an art curator, is no stranger to the entertainment industry (he’s actually engaged to Jenny Slate) and his exciting news on Instagram. “Oh, my. This has been in the works for a year, and I can’t believe it’s real,” Shattuck posted. “So grateful to have these two brilliant people be a part of my short story.”

So, what can you expect from the upcoming romance? Here’s everything we know about The History of Sound so far.

The History Of Sound Plot

A statement shared by Variety describes The History of Sound’s plot as “a snatched, short-lived moment” in the young men’s lives in which they are both “deeply changed” over the course of exploring the country. Their task? Recording “the lives, voices, and music of their countrymen” during wartime.

The History Of Sound Cast

O’Connor will play David and Mescal Lionel — but that’s all we know for now. Because The History of Sound is based on a short story primarily focused on its two main characters, don’t expect a large ensemble cast.

However, behind the scenes, major talent has already been announced, including award-winning director Oliver Hermanus. “Paul and Josh are two of the most promising actors of their generation who will share with us deeply soulful performances,” Hermanus said in a statement shared by Variety. As for his take on The History of Sound, he sees it as an “undeniably powerful story [that] will certainly resonate with audiences the world over.”

A History of Sound trailer is still some time away, but we do have somewhat of a timeline for the movie so far: Principal photography will begin next summer, per Variety.

This post will be updated with the trailer, release date, and additional plot details as more information on The History of Sound becomes available.

More like this
Everything You Need To Know About ‘Black Panther: Wakanda Forever’
By Bustle Editors
Lindsay Lohan & Jonathan Bennett Celebrated Mean Girls Day Very Differently
By Jake Viswanath
Alan Rickman's Diary Reveals Why He Considered Leaving 'Harry Potter'
By Darshita Goyal
Florence Pugh Reflected On Her ‘Don’t Worry Darling’ Experience On Opening Day
By Brad Witter
Get Even More From Bustle — Sign Up For The Newsletter