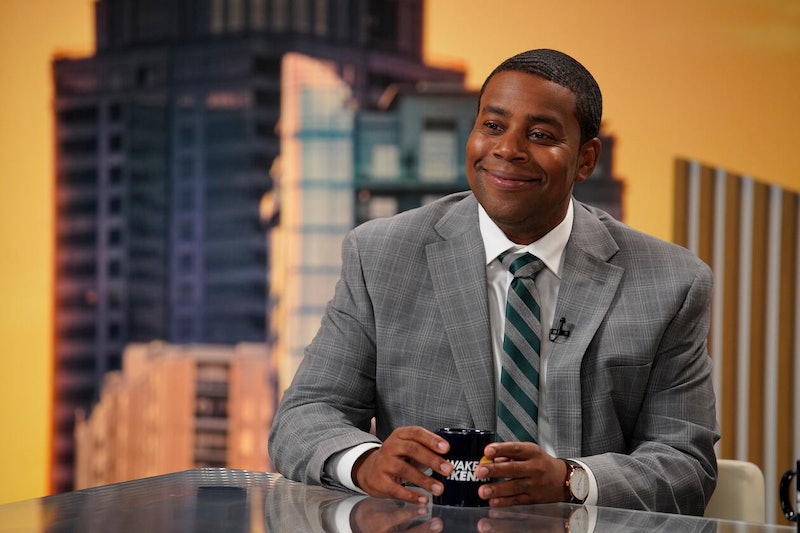 Saturday Night Live’s longest-tenured cast member, Kenan Thompson, made his primetime debut on Feb. 17 with Kenan. (Don’t worry, he and his hilarious costar Chris Redd are still very much on SNL, too). This heartwarming NBC sitcom about a recently widowed dad may be new, but Thompson’s aspirations to star on a sitcom are anything but. And his biggest TV dream has everything to do with Friends.

In a recent interview with Variety, Thompson remembered seeing Friends star Matthew Perry aka Chandler Bing on the Warner Bros. lot in the early 2000s. Ahead of his show's premiere, Thompson described how the passing encounter left a memorable impression on him. "The sun was shining, he had his sunglasses on, and he looked like he could not have been happier," Thompson told the magazine. "It was like 2 o’clock in the afternoon. And he was done for the day. It just looked like the sweetest existence I’ve ever seen. That sh*t sticks out in my mind. Like, he was f*cking beaming." Could life be any better?

Thompson went on to explain that the sitcom life seemed like a career pinnacle but not one he was sure he’d ever attain himself after honing his craft on shows like SNL, All That, and Kenan & Kel. "Especially for anybody that’s been put into the comedy category, a sitcom is kind of like the Holy Grail," he said. "It was always one of those achievements as far as like, will this ever happen?"

Though it might be some time before Thompson gets to enjoy the totally carefree vibes he admired in Perry due to COVID-19 and commuting between coasts to film Kenan and SNL, he doesn’t seem worried about the demanding schedule. "I’ll be rushing back to my new family, so I won’t be overly exhaustive because we’ll hold each other up," he told Deadline in a virtual press conference.

While it would certainly be difficult for fans to spot Thompson beaming and leaving work early on a weekday afternoon, they can catch him playing an Atlanta morning show host Tuesday nights on NBC.

More like this
Netflix Reveals First Look At Wednesday In The 'Addams Family' Spinoff Series
By Bustle Editors
A New 'And Just Like That' Table Read Pic Confirms A Key Character's Return
By Jack Irvin and Grace Wehniainen
24 Years Ago, 'Friends' Dropped Its Most Underrated Ross & Rachel Episode
By Grace Wehniainen
‘SNL’ Finally Spoofed Nicole Kidman’s Weirdly Beloved AMC Ad & Nailed It
By Stephanie Topacio Long
Get Even More From Bustle — Sign Up For The Newsletter