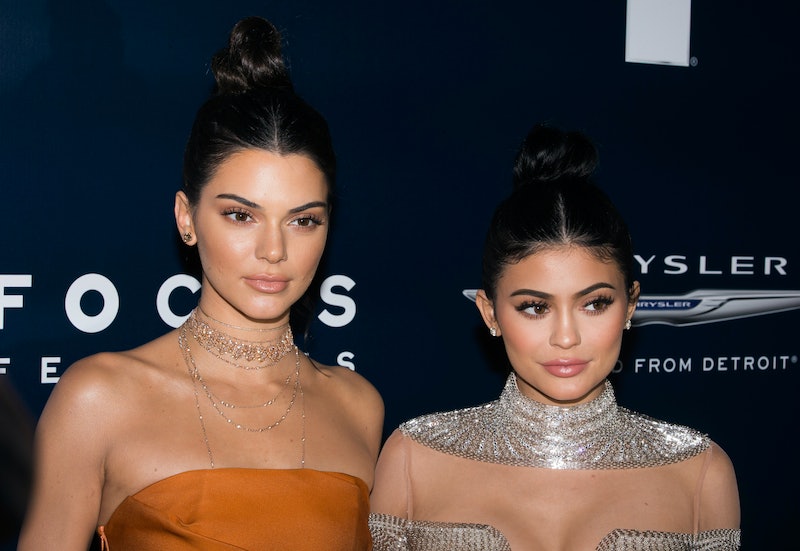 If there's one thing that Kendall and Kylie Jenner are known for, it's their mastery of self-deprecating comedy. OK, maybe that's not true, but it could soon be the case thanks to the hilarious TikTok video Kendall & Kylie shared on Thanksgiving. The supermodel, 25, and the makeup mogul, 23, appear to have spent the family holiday together, where they had a little fun revealing some bits about their own lives and personalities on social media.

In the TikTok video, which was uploaded by Kylie, the two Keeping Up with the Kardashians stars repeatedly walk toward the camera to sort themselves into one of two categories that appear on the screen. The first matchup makes them choose whether they are "supermodels" or "Instagram models." Kendall, who topped Forbes' list of the world's highest-paid supermodels in 2018, naturally struts toward the "supermodel" column. Kylie, meanwhile, makes a beeline for the "Instagram model" column before spinning away and declaring herself a supermodel. Kendall immediately then shoves her little sister back into her own lane. "I'm still a supermodel on the inside," Kylie captioned the video.

The next category is "dad's fav" or "mom's fav." Kylie sorts herself on the Caitlyn Jenner side, while Kendall reps for Kris Jenner. The two then approvingly look into the camera, slap each other five, and switch sides. Maybe that means they're each loved by both parents equally? The third category is arguably the most embarrassing, as it asks the two to choose between "hoopers" and "rappers." Kendall, who has been romantically linked to numerous NBA players, walks to the "hoopers" side, while Kylie, who had a long relationship with Tyga and shares a child with Travis Scott, ventures to the "rappers" aisle. Both women shield their faces with their hands while revealing their dating preferences.

One of the funnier categories is "going out" vs "staying in." Kylie gives Kendall a piggy back ride to the "staying in" column before sneaking herself over to the "going out" side. It's clear to see which of the two is the party animal. The next category offers zero drama, as Kendall declares herself "low maintenance" while Kylie appears proud to be "high maintenance." The final category — "sloppy drunk" vs "funny drunk" — is the most hilarious of all. Kendall, without shame, heads for the "sloppy drunk" side, while Kylie tries to pose as a "funny drunk." Kendall, having none of it, laughs and attempts to drag Kylie to the sloppy drunk side as her sister tries in vain to fight her off.

The duo's sister Kim Kardashian West took note of the video, sharing it to her Twitter account with the caption "They're so cute!" Kendall, in turn, shared Kim's tweet on her own Twitter, adding a tongue out, eyes closed emoji. Thanksgiving is a time for family togetherness, after all, and it looks like the bonds were strong for the Kardashian-Jenner clan this holiday.