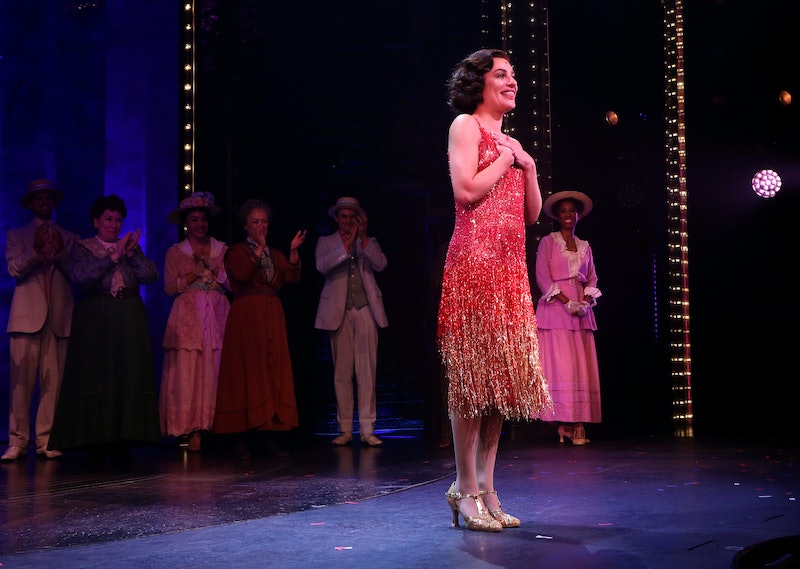 After years of speculation and a few Internet rumors, Lea Michele has finally taken over the role of Fanny Brice in the Broadway show Funny Girl, with art imitating life. But when she got the call from her agent informing her of the casting, it was the last thing on her mind.

On a segment from Drew Barrymore’s eponymous talk show, where she met Michele on the Funny Girl stage, she recalls that she was more preoccupied with getting her son to eat when her phone rang with the exciting announcement.

“When they called me that I got this part, I was at an Italian restaurant with my father and my son just doing the mom thing. I was trying to rush the dinner trying to get the baby home to put him in the bath,” Michele remembers, saying that her phone began ringing in the middle of dinner. “I picked up and it was my agents, and they said, ‘you’re gonna be Fanny Brice on Broadway.’ If I could’ve fallen to my knees on the side of the street, I would have.”

Michele continued the story recalling that as she was receiving the call, one of her former Spring Awakening co-stars Gideon Glick was passing by on the street. When he saw Michele’s reaction to the phone call, “he just instinctually knew” that she had gotten the part. Glick had the presence of mind to take pictures of Michele’s special moment.

The former Glee star also revealed that there wasn’t a dry eye in the house during her debut — her father, her best friend Jonathan Groff, and even Barrymore herself shed some tears when seeing Michele living her dream playing this role. “I sat at the desk at the top of the show and started singing the first few notes of the first song. I immediately heard my best friend Jonathan hysterically crying....it was really emotional for everyone,” Michele said.

Michele thanked her family, friends (including Groff and Ryan Murphy), and the fans who have been following and supporting her dreams for years. “It’s so cheesy but in the show we sing, ‘people who need people are the luckiest people.’ And I had my people here to see me.”

More like this
Lea Michele Made A Hilarious TikTok About The Conspiracy She Can’t Read
By Stephanie Topacio Long
Khloé Kardashian Is Reportedly Dating A Private Equity Investor She Met Through Kim
By Jordyn Tilchen and Jake Viswanath
The Try Guys Cheating Scandal, Explained
By Grace Wehniainen
Lizzo Twerks While Playing James Madison's 200-Year-Old Crystal Flute Onstage
By Radhika Menon
Get Even More From Bustle — Sign Up For The Newsletter