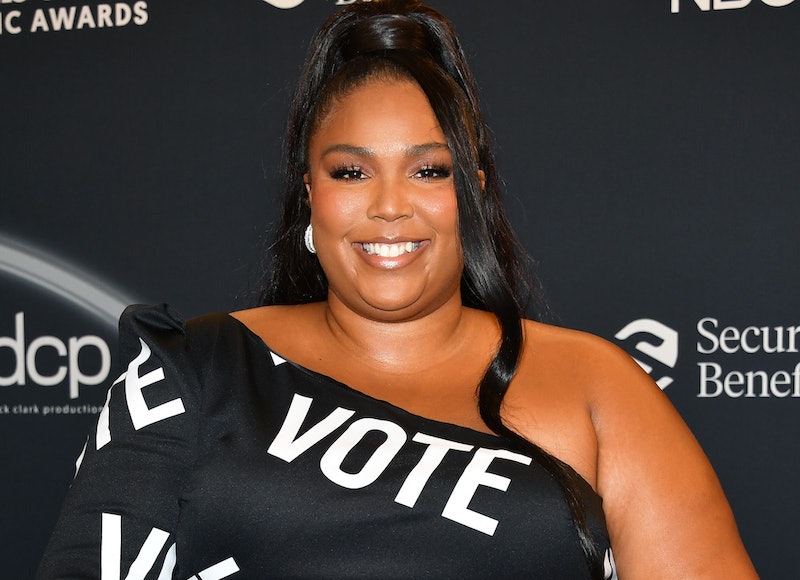 Step aside, Uncle Sam — there's a new patriot in town and her name is Lizzo. The "Juice" rapper celebrated Election Day with a hopeful Instagram post that called on voters to get to the polls. Alongside a photo of herself dressed in an American flag-themed jumpsuit captured by photographer Luke Gilford, she reflected on the state of the country and emboldened voters to stay in line and stay determined.

The "Truth Hurts" singer went on to detail some of the changes she would like to see after the election. "I believe in a country that teaches the true history so we can better understand where we live and how we can do better," she continued. "I believe in a country that listens to the cries of the protester and doesn't politicize death." She's also hopeful that we'll be able to restore this land and show respect to "the communities of people who owned America before colonizers renamed it."

The rapper finished her caption by reminding fans of what she stands for. "I believe in fairness, equality, a complete removal of religion in places where it does not belong," she wrote. Before signing off, she also reminded her followers not to give up hope for a brighter future. "I believe in so much, and if I believe it one day I can see it," she added. "It may not be tomorrow it may not be today, but it will be one day if we stay activated. We the people, ALL the people, deserve it."

Lizzo has been very vocal about the importance of voting in the 2020 election. In addition to campaigning for Democratic nominee Joe Biden at a rally in Michigan on Oct. 23., the singer documented herself mailing in her ballot early at a drop box in Los Angeles on Instagram last week. On Halloween, she doubled down on her endorsement of Biden by dressing as the infamous fly that landed on Mike Pence's head during the vice presidential debate in early October. "I voted for Biden," Lizzo captioned the post. And yes, she was photoshopped onto Pence's head for optimal effect.