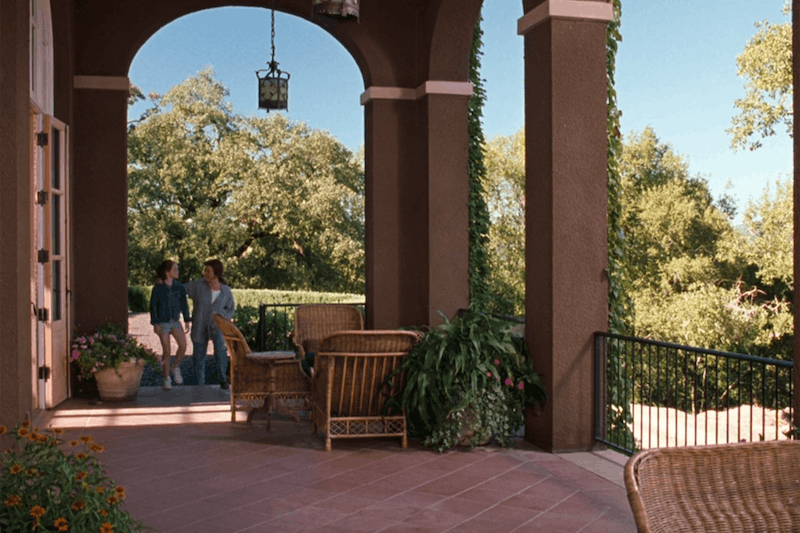 Even though it was her directorial debut, Disney’s adaptation of The Parent Trap has all the distinctive sensibilities of the Nancy Meyers’ interiors aesthetic we’ve come to love and expect (so much so that there is even an Instagram account dedicated to the “Meyers Interior”).

In her essay celebrating the genius of Nancy Meyers, Bustle’s own Dana Swartz writes, “Where Hollywood desexualizes and disposes of women over 40, Nancy Meyers celebrates them, showing them as women who have crushed their careers and become financially stable enough to buy objectively stunning pieces of property.”

And The Parent Trap arguably has some of most stunning properties found within the Meyers canon. First up you have Elizabeth James’ white Georgian townhouse in Knightsbridge. This house is a sight to behold, with steps taking you up to the columned front porch and into a distinctively British (and no doubt obscenely expensive) home with a cream and pale beige palette. Seeing this home, you can easily imaging curling up in your cashmere with a cup of tea while it rains buckets outside.

On the other side of the Atlantic, we get to see the famous Meyers’ kitchen (as seen in films like It’s Complicated, The Intern, and The Holiday) in action on Nick and Hallie Parker’s Napa Valley ranch, along with a vineyard, a pool, stables with with horses, and a wine cellar.

Whilst a lot of Meyers’ movies were filmed on sets, fans of The Parent Trap will be excited to hear that a few scenes from the 1998 classic – including some at the parents’ two homes – were actually filmed on location. Meaning, yes, you can actually still visit these dreamy The Parent Trap locations in real life. Keep reading to find out more details.