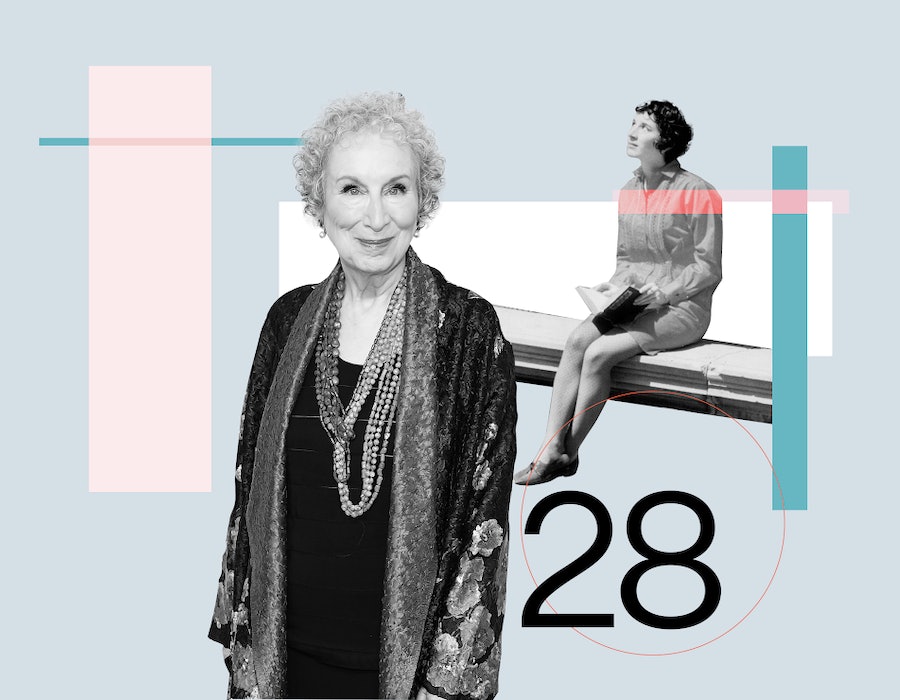 In Bustle’s Q&A series 28, successful women describe exactly what their lives looked like when they were 28 — what they wore, where they worked, what stressed them out most, and what, if anything, they would do differently. This time, Dearly author Margaret Atwood discusses how she balanced a career in academia with writing her first novel.

By the time Margaret Atwood was 16, there was only one thing she knew for certain: she was going to become an author. So the precocious teen didn't waste anytime getting started. At 22, Atwood published her first book of poetry, Double Persephone, which she quickly followed with a sophomore collection. Both earned her a slew of Canadian literary awards. But despite the accolades for her early efforts, at 28, Atwood was feeling far from accomplished. “It didn't feel like great success at the time,” she tells Bustle. “People of my generation were doing similar things, so it didn't feel like I had achieved some sort of ultimate goal at all.”

Atwood's next goal was publishing her first novel. The manuscript was due to the publisher at the end of her 28th year, but between teaching at Sir George Williams University and late nights working to meet her looming deadline, Atwood started feeling run down. "I got very thin. I was drinking way too much coffee, which later gave me a condition called pyloric spasm," The Handmaid's Tale author says. "[I was all] work, work, work, so I wasn't really paying attention [to my weight]. Then I thought, 'This is kind of weird.' I didn't have an eating disorder, I had a working disorder." Though Atwood was willing to give up coffee, she refused to stagnate when it came to her writing. The Edible Woman was published by her 30th birthday.

In the over 50 years since Atwood's first novel hit shelves, her work ethic has never wavered. The author, 81, has published 18 books of poetry, 17 novels, 10 books of non-fiction, eight collections of short fiction, eight children's books, and three graphic novels. Looking back, it's a career that Atwood thinks would've even made that ambitious 16-year-old proud. "Who would have thought?," she says with a laugh.

Below, Atwood reflects on the women's rights movement, being considered a freak in academia, and straightening her hair to look like Twiggy.

I was teaching quite a lot of hours per week. I was finishing [what would become] my first published novel, called The Edible Woman, which was published the next year. And I was living with my then-husband [Jim Polk], who I had gotten into Canada from the United States during the Vietnam War.

What were your goals at the time? Did you want to stay in academia?

It was annoying to be a female in that milieu at the time. There weren't very many [women] and you were considered kind of a freak. I was considered an extra freak, because I was already a published poet and about to have a novel come out. That was a very male decade in writing. Take the various poetry movements such as the Beats or the Black Mountain poets. All of them, they're all men. I only knew two female writers my own age: one was from Quebec, Marie-Claire Blais, and one was from Toronto, Gwendolyn MacEwen.

I just felt irritated [by academia]. But I'm not easily deterred, so none of this had a flattening effect on me. Because I always thought of it as a job rather than a career. If I could make money some other way, I was going to do it.

Your work has become synonymous with the fight for equality and for women to have autonomy over their bodies. What was your political engagement like at that time?

There were various protests going on in different places in the world. The anti-Vietnam movement was still going on. We had [many] American draft dodgers that had come up to Canada. In fact, I knew a lot of them. The women's rights movement was about to hit the public consciousness. It hadn’t yet in '68, I date that to '69. It was simmering away in New York for a while, but other people didn't know about it. The first thing I knew about it was in '69, when I was in Edmonton, Alberta, and a friend of mine from New York sent me an article called “Housework Is Work.” That is the first I heard of the women’s movement.

Do you have any regrets from that time?

Twiggy hit the scene and [ushered in] the age of straight hair. I tried to straighten my hair and it was a complete disaster. I'll never, ever do that again. I used hair straightener off the shelf — who knows what it was made of — I'm lucky I didn't die [from the chemicals]. Some of it just broke off, and what remained did get straight, but then it grew in curly underneath it. I think in the '90s it would have been a look. But it was not a look in the late '60s.

Has there ever been a moment where you felt like you made it?

What is the “it” that you make? If you don't have any sort of expensive car, fur coat, mansion ambitions by which you measure these things, I think it only has to do with whether you think you've done right by your book. And since nothing is perfect, you never really feel that. [Even with The Handmaid’s Tale] I can go back and look at it now and say, "Oh, I would do this differently. I would change that." But of course, you always have retrospective thoughts.