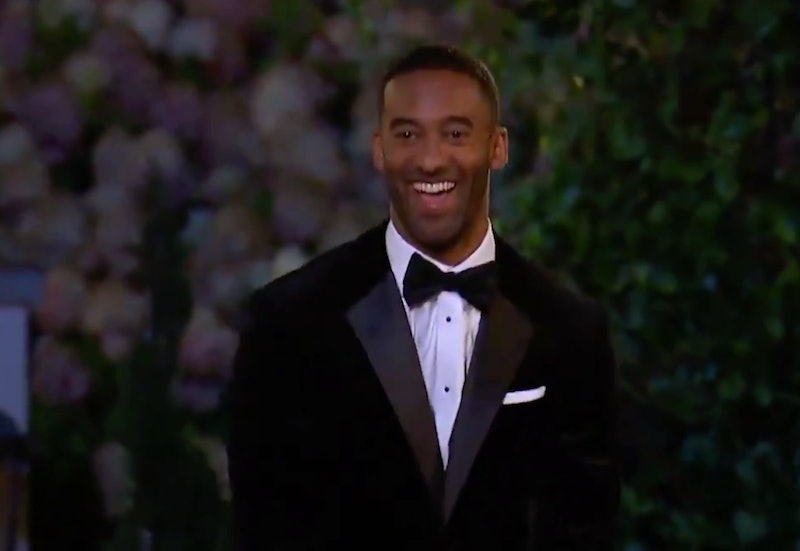 Expect Matt James’ Bachelor journey to be an emotional one. The real estate entrepreneur — set to make TV history in Jan. 2021 as the franchise's first Black lead — admitted to never having been in love before in the first teaser for the upcoming season. It's not a particularly explosive or worrisome revelation, but according to host Chris Harrison, it resulted in a "rude awakening" for Matt while filming. The host further teased that James is now a much "different man than when he came to us."

"It's not that he hasn't said 'I love you' before," Chris told Us Weekly on Tuesday, Nov. 24. "I think the problem is he realized [as] the Bachelor, he had never fully understood what [love] means, and now I think this has really opened [his] eyes." Matt's also never been a contestant on the show, nor has he experienced the ins and outs of production. "He got really a crash course because he didn't get the few steps of being on the show," Harrison added.

"He really just ripped the Band-Aid off and sometimes that hurts a little bit," the host continued. "I think he had a bit of a rude awakening of the man he is, the way he loves, [and] what love means to him." And while Chris promised fans an incredible journey with their new Bachelor, he wants viewers to expect some very real moments from a "man who realizes, 'Wow, OK. This is love and this is what it means and I'm really here to find this.'"

According to Harrison, Matt's tenure was quite the learning process. "There are some wonderful things to the naïveté and innocence to just coming in," Chris said, adding that Matt will experience a lot of Bachelor firsts on national TV. "He never came up to the mansion before, he never went to a rose ceremony — he doesn't even know how to get a rose or give a rose," the host said. "We really had to walk him through and teach him; it was Bachelor 101. And it was trial by fire."

Chris added that Matt initially brushed off warnings that his journey would be an emotional one, but soon realized the host was not exaggerating. "It is an extraordinary circumstance and a range of emotions, and I told him, 'You're going to feel it all. There will be moments where you want to punch me in the face and you're going to be crying and upset,'" Chris said. Fortunately, Matt never threw any punches, but the show certainly took his emotions for a spin. "There were just these moments — the show strips you down," Harrison said. "It takes you on this emotional ride that most people don't understand until you're a part of it."

Based on ABC's new teaser for the season, which came out on Monday, Nov. 23, James' journey does seem to be full of ups and downs. The clip teased declarations of love, contestant confrontations, and lots of tears. Matt also has a make out session with a contestant on the hood of a car, rides a hot air balloon with another, and tells someone else that they may "be someone that I can share my life with." "I'm not here for the girls, I'm here for Matt," one teary-eyed contestant says. "I just hope that it's worth it."

Matt's season of The Bachelor premieres on Monday, Jan. 4 at 8 p.m. on ABC.