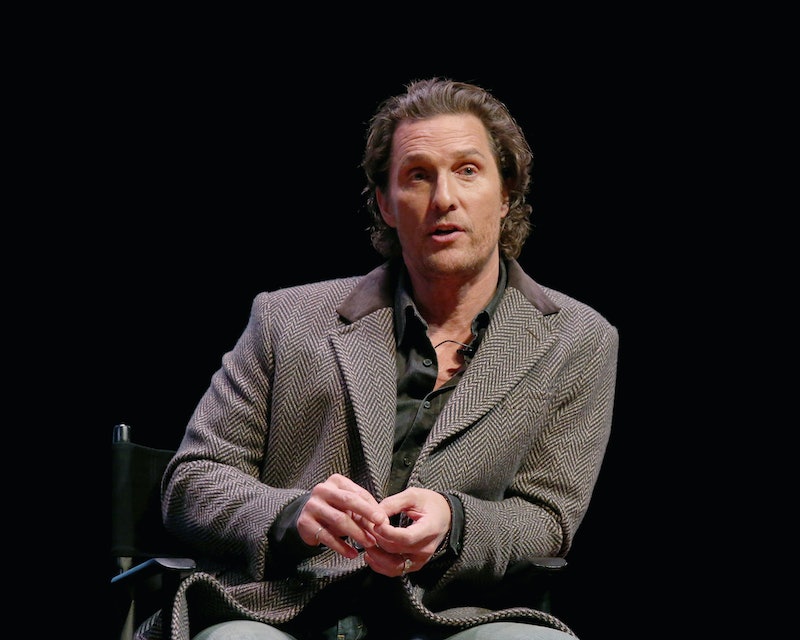 Some people haven’t apparently learned from Arnold Schwarzenegger and Donald Trump that celebrities don’t always make great politicians. Matthew McConaughey is considering running for Texas governor, as reported by CNN on March 11, and fans don’t know how to feel about the potential career move.

During a recent episode of The Balanced Voice podcast, McConaughey said that a gubernatorial run was a “serious consideration” for him, as current Texas Governor Greg Abbott will be up for re-election in 2022. “I'm looking into now again, what is my leadership role?” he said. “Because I do think I have some things to teach and share, and what is my role? What's my category in my next chapter of life that I'm going into?”

This isn’t the first time that the Wedding Planner star has publicly expressed interest in running for Texas governor. During a November episode of The Hugh Hewitt Show, McConaughey was asked about the chances of him running, at which time he clarified that the decision wasn’t solely up to him. “I don't know, I mean, that wouldn't be up to me,” he explained. “It would be up to the people more than it would me.” However, he did give a taste of a potential campaign platform. “I want to get behind personal values to rebind our social contracts with each other as Americans, as people again,” he said.

His comments on a possible gubernatorial campaign come after a December interview with Russell Brand in which McConaughey said voters on the “illiberal left” criticized those who supported Trump. “There are a lot [of people] on that illiberal left that absolutely condescend, patronize, and are arrogant towards the other 50 percent,” he said. He went on to suggest that the U.S. should collectively make “an aggressive move” to be “aggressively centric” to fix division. McConaughey has not stated whether he would run as a Democratic or Republican candidate, or with an independent party, something these comments make even more unclear.

The actor received huge backlash on Twitter for his comments, saying his method of fixing the country would only work if you were a privileged, cishet, white man like himself. And judging by fans’ reactions on Twitter, they’re not too enthused about the prospect of McConaughey serving as the governor of Texas. Some fans have questioned what political party he would run for, while others are taking heed to Trump’s tumultuous presidential term and asking life-long politicians to run instead. There are also your standard “alright, alright, alright” jokes.