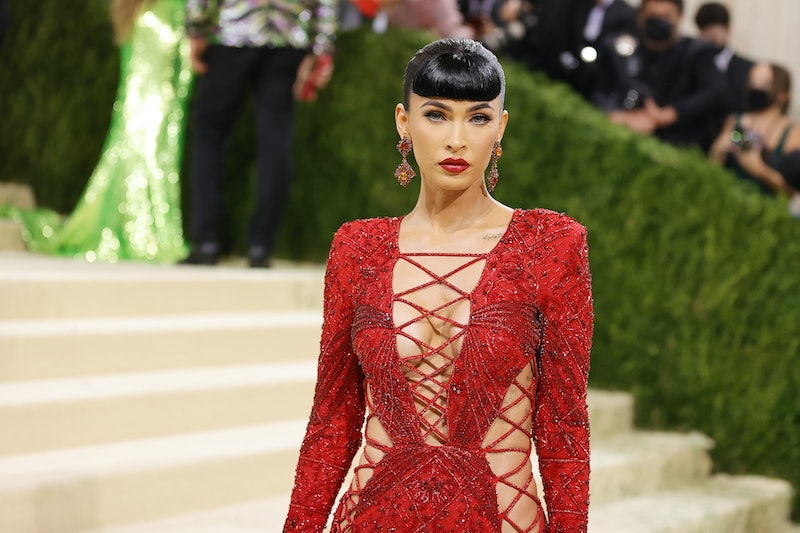 Megan Fox has been having a pretty fashionable fall, to say the least. From her super sheer MTV Video Music Awards dress to her Bettie bangs and fiery crisscross ensemble at the Met Gala, she’s delivered some of the season’s most memorable moments in style and beauty. And she’s not done yet. On Oct. 8, the Jennifer’s Body star took to Instagram to debut her latest look: long, silvery blond tresses.

What prompted the departure from Fox’s familiar brunette hair? Thank her upcoming role in 2022’s Johnny and Clyde, which will also star Preacher’s Tyson Ritter. Fox is set to portray Alana, a “crime boss” who runs “a prosperous casino,” per Deadline. Fox teased her new character in her photo’s Instagram caption, writing, “This is what the devil’s daughter looks like.”

Oh, right, one small detail about her upcoming film? It’s super scary — as co-writer and star Nick Principe told Bloody Disgusting in September, the film switches from heist fare to a “balls-to-the-wall ... spooky supernatural slasher” once the serial killer characters are trapped in Alana’s cash room. Co-writer and director Tom DeNucci said Alana will be a “very dark” character and that her look is meant to reflect that.

“I don’t want to give away too much, but visually we wanted her to almost be like a Disney princess, but a messed up, very dark, twisted version of that,” DeNucci continued. “Her look is just incredible … this kind of almost evil princess character.”

While the name of the film was inspired by the real-life Bonnie and Clyde, don’t bother looking for an Alana equivalent in their story. The connection starts and ends with the project’s name and doesn’t actually draw on the infamous outlaws’ 1930s crime spree, according to Bloody Disgusting. There are plenty of other films for that.

A specific release date for Johnny and Clyde (plus, the casting of the titular psychopathic criminals) is still TBA, but at least we have Fox’s behind-the-scenes dark glam to hold us over in the meantime. And if you miss Fox’s dark hair, don’t worry — it probably won’t be gone for too long. As Harper’s Bazaar reports, Fox’s hairstylist Miles Jeffries tagged wig maker Merria Dearman in his own post showcasing Fox’s new look, suggesting that it might be Dearman’s artistry instead of a straightforward dye job.

Whatever the hairstyle specifics may be, one thing’s for sure — Fox’s next project (and accompanying new look) is a must-see for fans who grew up on Jennifer’s Body and are itching for more horror.