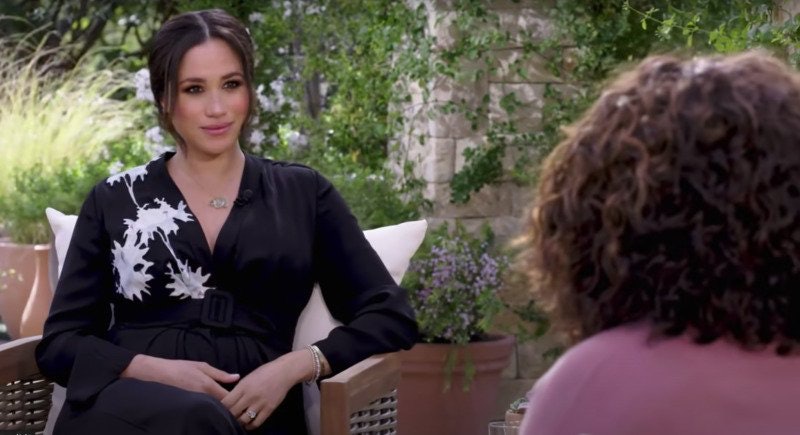 Following an already emotional first few minutes of her interview with Oprah, Meghan Markle detailed the depths of her mental health struggle while facing immense scrutiny — a struggle so serious, she said, that she "didn't want to be alive anymore." Meghan also described the time she sought support from "the institution" of the royal family and human resources but was told that it wasn't possible for her to receive professional help.

"I was really ashamed to say it at the time, and ashamed to have to admit it to Harry, especially because I know how much loss he’s suffered," Meghan said. "But I knew that if I didn’t say it, that I would do it. And I just didn’t want to be alive anymore. And that was a very clear and real and frightening, constant thought."

Meghan first took her concerns to a senior member, who told her that seeking help "wouldn’t be good for the institution." Next, she approached human resources for an equally fruitless response. "They said, 'My heart goes out to you because I see how bad it is, but there’s nothing we can do to protect you because you're not a paid employee of the institution,'" she recalled.

Oprah wondered if she considered seeking out help on her own terms, but Meghan said that would be effectively impossible. "You can’t just do that. I couldn’t, you know, call an Uber to the palace," she said. "When I joined that family, that was the last time until we came here that I saw my passport, my driver’s license, my keys — all that gets turned over. I didn’t see any of that anymore."

The day Meghan first shared her fears with Harry, she recalled, the couple attended a concert at the Royal Albert Hall — during which her glamorous appearance belied the turmoil inside. She wept when the house lights went out. "You have no idea what’s going on for someone behind closed doors," she said. "You have no idea. Even the people that smile the biggest smiles, and shine the brightest lights, it seems ... [we need to] have compassion for what’s actually potentially going on."