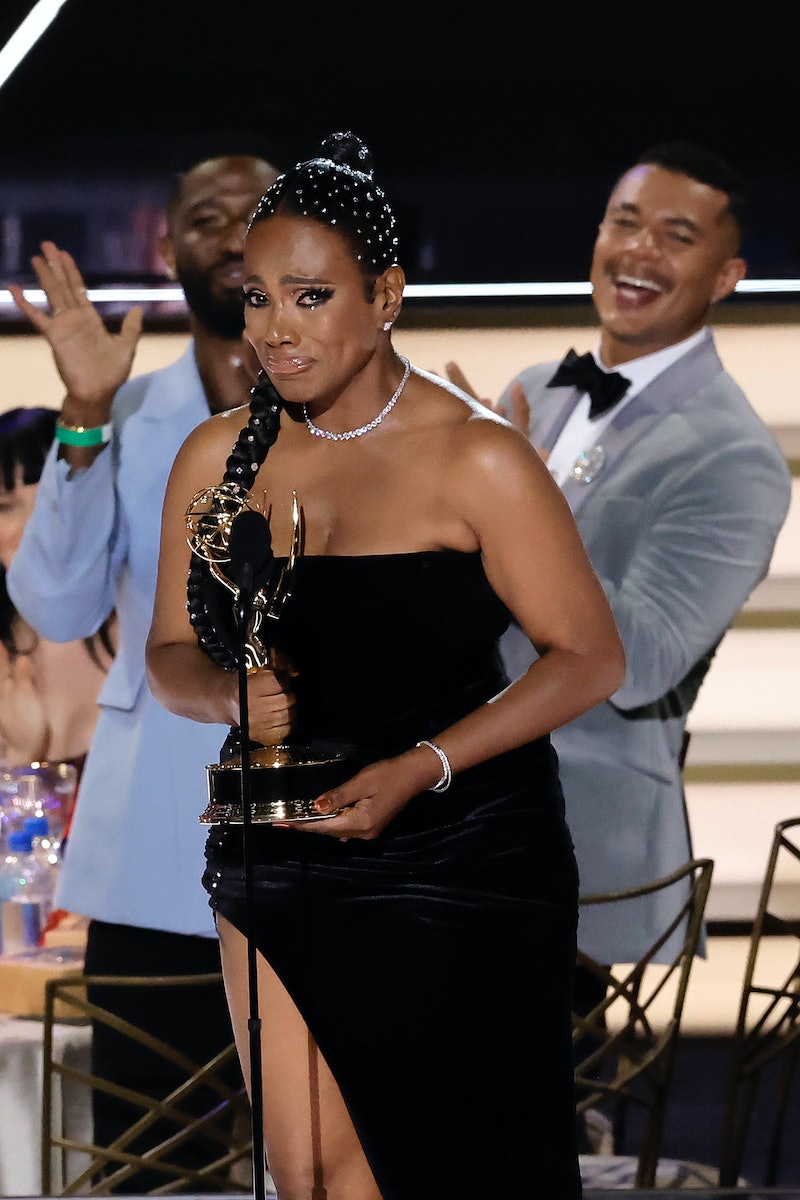 Hit ABC sitcom Abbott Elementary was predicted to do well at the 2022 Emmys — so there was plenty of celebration when the show did, in fact, win the first award it was nominated for during the Sept. 12 show. While accepting her Outstanding Supporting Actress in a Comedy Emmy, Sheryl Lee Ralph broke out into a musical moment, singing an excerpt from Dianne Reeves’ “Endangered Species” to begin her speech: “I am an endangered species / But I sing no victim’s song / I am a woman, I am an artist / And I know where my voice belongs.”

For the second half of her speech, Ralph offered a bit of heartfelt advice to viewers. “To anyone who has ever, ever had a dream, and thought your dream wasn’t, wouldn’t, couldn’t come true — I am here to tell you that this is what believing looks like,” she said. “This is what striving looks like. And don’t you ever, ever give up on you. Because if you get a Quinta Brunson in your corner, if you get a husband like mine in your corner, if you get children like mine in your corner, and if you’ve got friends like everybody who voted for me, cheered for me, loved me — thank you. Thank you. Thank you.”

The Broadway icon’s Emmy win (her first ever!) received several standing ovations — and just as much love on Twitter.

Ralph, who plays Barbara on Abbott Elementary, opened up to Bustle back in March about the role Brunson created for her — which Ralph described as a “gift.”

“When I first read it, I [said], ‘Let me take a crack at the principal,’ Ralph recalled of the Principal Ava part, which went to Janelle James. “She said, ‘Absolutely not. We need a queen for this [Barbara] role, and you are that queen.’ My God, this wonderful young woman! And the fact that this role is inspired by her mother, a veteran of education of the Philadelphia school system, a dedicated teacher. The fact that she saw me as that queen in that role of inspiration — not just to her but to students — it's a blessing.”

More like this
The 'Love, Lizzo' Harry Styles Scene Is Just 1 Moment That Made Fans Feel Seen
By Brad Witter
Twitter Is Very Torn About The Winner Of 'Dancing With The Stars' Season 31
By Jake Viswanath
The First Trailer For 'That '90s Show' Includes So Many Nods To The Original Series
By Jack Irvin, Alyssa Lapid and Grace Wehniainen
Elizabeth Debicki On Her Approach To The Most Debated Scene From 'The Crown'
By Grace Wehniainen
Get Even More From Bustle — Sign Up For The Newsletter