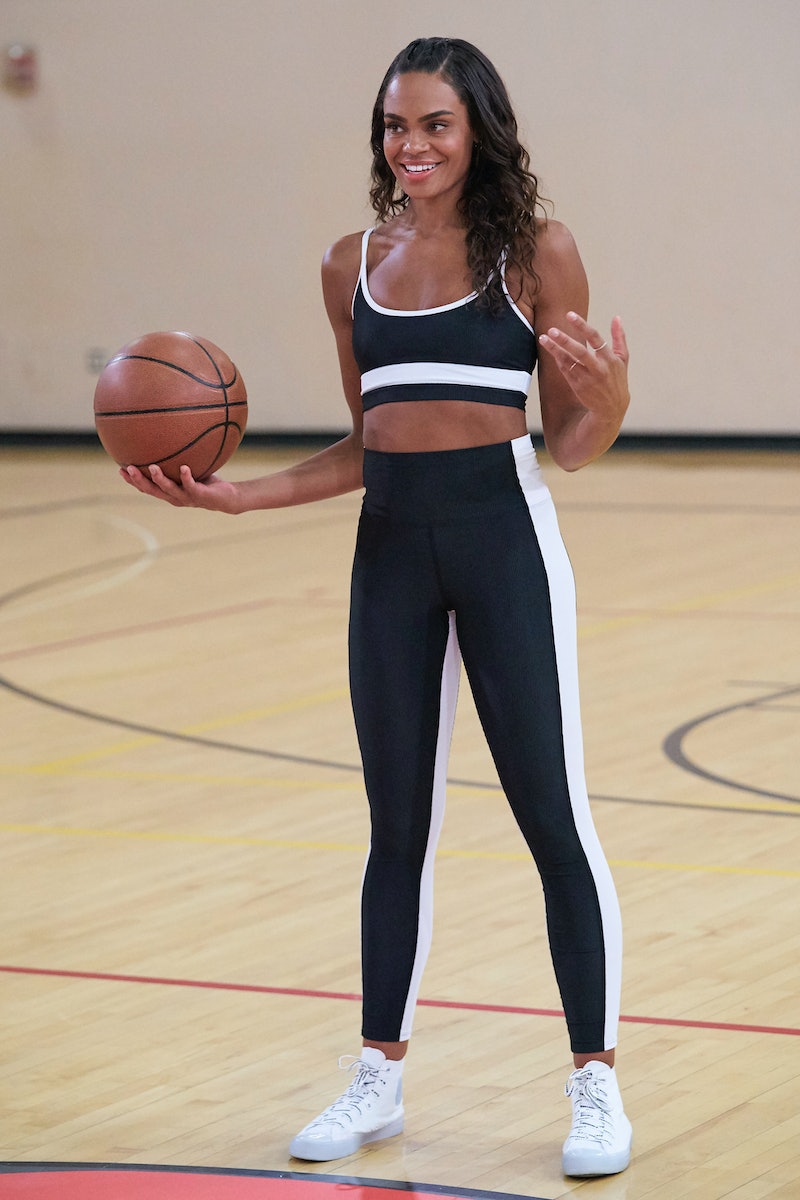 The men on Michelle’s Bachelorette season seem to know exactly two facts about her: that she’s a teacher, and that she plays basketball. Nearly all of their limo entrances included some kind of reference to basketball or teaching, and ABC hasn’t done any better to showcase literally anything else there is to know about Michelle — or even explain how impressive her background truly is. That will assumedly change in the Oct. 26 episode, when we finally get to see Michelle on the court.

As a senior in high school, Michelle averaged a whopping 22.1 points per game, setting the scoring record at Woodbury High School in Minnesota. She was given Suburban East All-Conference honors in addition to being named MVP of the Minnesota Basketball Coaches Association All-Star Team. Coming out of high school, she was selected to the Associated Press All-State team and named First-Team All-Metro by the Star Tribune, a publication that regarded Michelle as “perhaps the fastest player,” on the court. Michelle also finished as a finalist for the title of Miss Basketball Minnesota and was nominated for the coveted McDonald’s All-America team.

Michelle started her college basketball career in 2011, beginning as a role player for Bradley University’s Braves basketball team in Peoria, Illinois. She came off the bench throughout the season before being promoted to a starting position in her sophomore year. She was also named a Second-Team Missouri Valley Conference Scholar-Athlete the same year.

In her second season with the Braves, Michelle averaged 7.7 points per game and 14.3 points during the final six home games of the season. It was during the season that Michelle scored a game-winning layup against Illinois State with 1.3 seconds left.

Michelle’s success on the team continued in her junior year. In the season opener against the University of Illinois, she posted a career high of 32 points. She again averaged 14.3 points per game — the highest scoring average at Bradley since 2001 — and later raised her average to 17 points per game. She also led the team with 55 steals over the course of the season and made 137 free throws, the third-best season total in Braves history. On top of that, she became just the fifth player to ever tally 400 points and 55 steals in one season, earning her All-MVC and MVC scholar-athlete honors.

In Michelle’s fourth and final year with the Braves, she once again earned First-Team MVC Scholar-Athlete honors in addition to reaching 1000 career points. She tied the single-game Bradley scoring record with 38 points, finishing as the 13th ranked scorer in the school’s history.

Michelle has since moved on to teaching and left her basketball career behind her, but the sport is still clearly a big part of her life. Some of her contestants, like Joe, also come from basketball backgrounds, but it remains to be seen if they’ll be an equal match for her on or off the court.