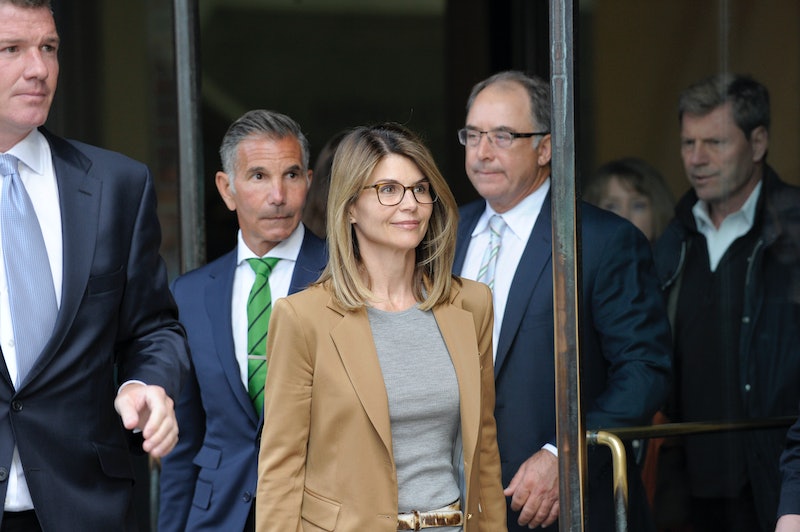 Ever since the college admissions scandal broke in March 2019, followers have been asking one question: Where's the documentary? Almost two years later, a streaming service is finally delivering. Netflix's new documentary Operation Varsity Blues promises a deeper look at the scandal than you've ever seen before. The upcoming doc was helmed by director Chris Smith and producer Jon Karmen, the filmmakers behind Tiger King and Netflix's doc about the ill-fated and much-memed Fyre Festival, so you know nothing will be held back.

However, don't expect too much focus on the (in)famous stars that were a part of the scandal. Debuting on March 17, Operation Varsity Blues will center on the mastermind behind it all, Rick Singer, and detail the methods he used to "persuade his wealthy clients to cheat an educational system already designed to benefit the privileged," according to a press release.

The doc will feature both interviews and "narrative recreations" of the conversations between Singer and his clients that were wire-tapped by the FBI during their investigation. There's no word on whether Lori Loughlin and Felicity Huffman are some of the featured clients. But the first full-length trailer shows glimpses of the A-listers heading to court for their involvement in the scam. The footage also shows Stranger Things star Matthew Modine as Singer and utilizes real dialogue from conversations the FBI became privy to after wiretapping phones. "In America, you love the wealthy and you hate the wealthy," can be heard via voiceover. "They disgust us and they fascinate us."

A previous teaser released by Netflix teases one of those convos between a parent and Singer, showing an unnamed man worried about the possibility of an article coming out that would expose the scheme of parents paying $250,000 to get their kids on the college water polo team (sound familiar?).

As everyone will remember, the actors were just some of the wealthy parents indicted in the 2019 scandal. Huffman was sentenced to 14 days in prison after pleading guilty for paying $15,000 to have her daughter's SAT scores inflated. Loughlin just completed a two-month prison sentence after pleading guilty to conspiracy to commit mail and wire fraud in May 2020. Her husband, Mossimo Giannulli, is currently serving a five-month sentence for the same charge. The couple were accused of paying $500,000 to get their daughters, Olivia Jade and Isabella, admitted to the University of Southern California as crew team recruits despite not rowing.

This isn't the first film that's been made about the scandal, of course. After the ordeal came to light in March 2019, Lifetime quickly made a TV film, bluntly titled College Admissions Scandal, that was loosely inspired by Loughlin and Huffman's stories (but didn't use their names or any semblance of their personalities, of course). As the world awaits the day that Hollywood creates an Oscar-worthy film about the scandal, the upcoming documentary will do nicely in peeling back the curtain.

Operation Varsity Blues will stream on Netflix on Wednesday, March 17.

More like this
Andrea Arlington, Alexis Neiers Haines’ Mother, Now Works As A Life Coach
By Morgan Leigh Davies
Where Is The Bling Ring’s Rachel Lee Now?
By Arya Roshanian
Lori Vallow’s Son Was Arrested For Sexual Assault Days Before 'Sins Of Our Mother' Premiered
By Brad Witter
Lori Vallow Faces The Death Penalty For Allegedly Murdering 2 Of Her Children
By Brad Witter
Get Even More From Bustle — Sign Up For The Newsletter

This article was originally published on Feb. 22, 2021