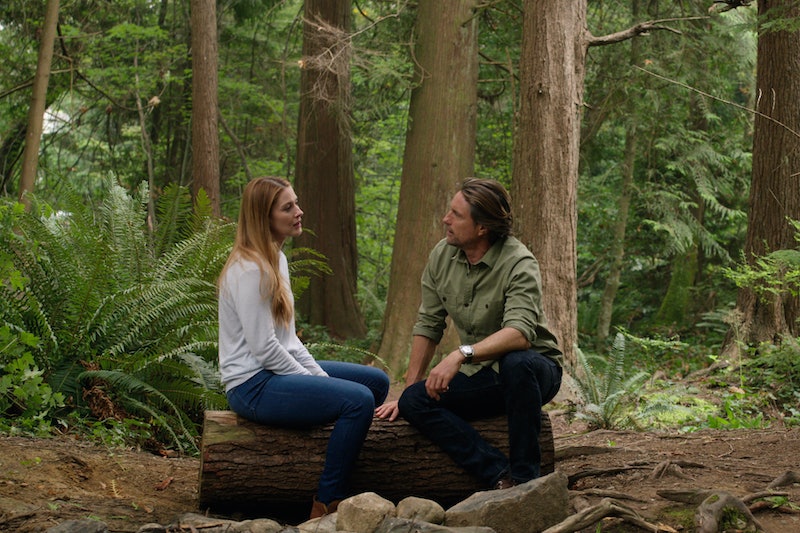 Next to the tragic love story between Jack and Mel, one of the most alluring things about Virgin River is, well, Virgin River — the small charming woodsy enclave where it all goes down. With Virgin River Season 4 set to return soon (it wrapped filming in December), viewers can return to the show’s dreamy mountains, cozy cabins, and breathtaking waterways in no time. However, despite the generally down-to-Earth nature of Virgin River, its setting owes itself to a bit of TV magic. Don’t worry, the dramatic forest vibes aren’t all pretend — they just aren’t where you think they are.

Of course, this isn’t such a surprise — Robyn Carr, the author of the Virgin River books, told Entertainment Weekly she’s used to reminding fans that the town “only exists in our hearts and minds.” A fictional town has to film somewhere, though, and for Virgin River, that “somewhere” is the natural expanse located in and around Vancouver, British Columbia. Here is everything you should know about Virgin River’s real-life filming locations to satisfy your forest wanderlust and give you a new dream vacation.

Mel apparently drove all night from Los Angeles to Virgin River — but in reality, that trip would take something more like 20 hours. Located in Murdo Frazer Park, as reported by Condé Nast Traveler, the McCrea cabin was built 70 years ago. Its old, less-than-luxurious character was important to the plot of Virgin River and served as the first signal to Mel that her new small-town life was not going to be anything like she’d expected.

As detailed by Vancouver lifestyle website Vancouver Is Awesome, the little cabin “averages 12 productions per year.” So, if you visit, there’s a chance an in-progress project could keep you away from exploring the building as closely as you’d like. Plus, renovations are in the works to keep the cabin (which once served as a home for the park’s caretakers) looking its best for years to come.

In addition to Mel’s cabin and the bar, many of Virgin River’s most memorable moments revolve around the water — whether it’s for fishing, kayaking, or picnicking as Jack and Mel did on their adorable first date. As Condé Nast Traveler explains, the waterfront digs of Burnaby serve as a backdrop to Paige’s food truck and other scenes. Meanwhile, if you want to immerse yourself in the real feel of small-town Virgin River, Bowen Island might be your best bet. As reported by the local Bowen Island Undercurrent, the island’s Snug Cove was mainly used for “establishing shots,” like the kind you might see between pivotal scenes at the cabin or Jack’s Bar.

Country Living reports that exterior shots of Jack’s Bar were filmed at The Watershed Grill, a real restaurant in British Columbia. Alas, the inside we see on Virgin River is actually a studio. But even though the interior itself (and the very dreamy bartender) is made for TV, you can still come by to snap a photo and enjoy a meal by the Squamish River, which sounds close enough to the full Virgin River experience.

Embrace Your Adventurous Side On Grouse Mountain

While many of the environments on Virgin River make you want to curl up and cuddle with a favorite book (or person), there are also plenty of adventurous, outdoorsy options IRL. According to Atlas of Wonders, the Lumberjack Games in Season 3 take place on Vancouver’s Grouse Mountain. During the winter, it’s the perfect place to go skiing or snowboarding — but come during warmer weather and you can also go ziplining or race across that scary rope bridge, like Jack and Mel.

If the idyllic landscapes and cinematography of Virgin River inspire you to explore further, check out the cast’s social media pages. Martin Henderson and Alexandra Breckenridge, who portray Jack and Mel, respectively, regularly share photos of their explorations into the Vancouver wilderness both on- and off-set — as does the official Virgin River Instagram page.

Virgin River Isn’t The Only Netflix Show That Films Here

Many fans of Virgin River have also flocked to the charm of Firefly Lane — and as it turns out, the two Netflix series have more in common than cozy romance. As reported by The Sun, Firefly Lane filmed in Burnaby, British Columbia, just like its Netflix predecessor. Also like Virgin River, of course, Firefly Lane was borrowing BC as a stand-in for a different place entirely.

More like this
Does 'Locke & Key’s Ending Mean There Could Be A Season 4?
By Sophia Moore
Watch The Trailer For Netflix’s Edgy New Comedy 'FAKES'
By Brad Witter
What’s New On Netflix: 'Never Have I Ever' & 'Indian Matchmaking' Return
By Arya Roshanian
Here’s How You Can Watch Season 3 Of 'Never Have I Ever' In The UK
By Frances Stewart
Get Even More From Bustle — Sign Up For The Newsletter

This article was originally published on July 8, 2021