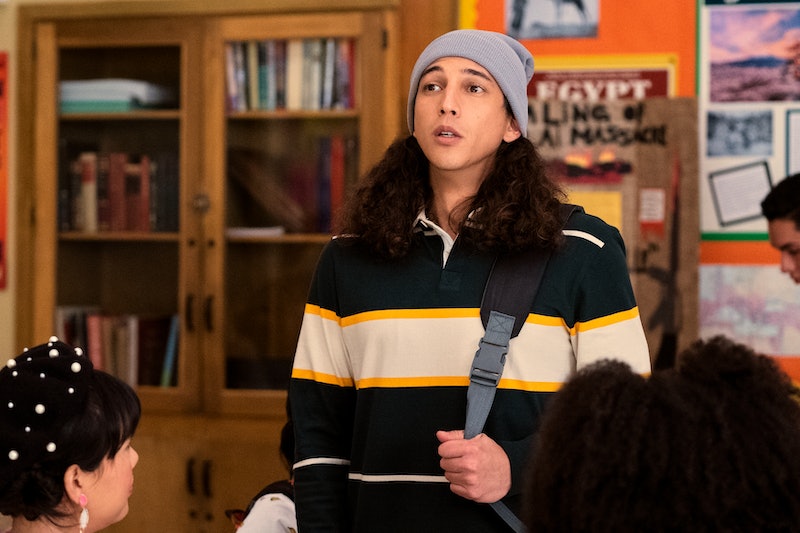 Spoilers ahead for Never Have I Ever Season 3. By the end of Never Have I Ever’s latest season, Devi has not only experienced her first relationship, but also her second AND cashed in a “boink” with Ben (Jaren Lewison). When her first ex-boyfriend Paxton graduates at the end of the season and is elected to give the class speech, he shouts out Devi’s support in helping him get across the finish line grade-wise. Devi realizes she no longer has feelings for the dreamboat Paxton, even when he is extending an olive branch in front of the entire school — a true moment of growth for the show’s resident hot guy. But where would be Paxton be without his bestie Trent?

Known for his laidback vibe that belies a much more mysterious background — his dad is a sommelier, his mom an illusionist at the Magic Castle — Trent tends to steal scenes with his moments of down-to-earth charm, like when he asked Eleanor to dance in the Season 2 finale.

Of course, considering the comedic chops of actor Benjamin Norris, that’s maybe not too surprising. Even before his role as Trent on Never Have I Ever, Norris has been busy cultivating a creative resume in all forms of comedy — from short-form sketches on your social feed to an instantly iconic role on a fan-favorite sitcom. The Never Have I Ever writers have leaned into his comedic skills, allowing him to improvise in scenes on the Netflix series.

Norris describes Trent as a “himbo stoner,” a characteristic that he injected into the portrayal. “When I went in for Trent, the character description was was a bit more along the lines of jock/frat boy type,” he told IndieWire. “I brought a little bit of that himbo stoner energy in there, and I think it just took flight after that.”

In Season 3, Trent gets an expanded role when he begins dating Eleanor. We see some of his home life, are privy to his flirting techniques (including burping his crush’s name), and witness him as a loving and supportive boyfriend. “He’s an onion and I feel like [the writers are] showing every layer to him, which is very cool — and it’s not only cool to the fans and the audience, but it’s also cool to me because I’m bringing this character to life, and every new little nugget of information they give me I love to run with,” Norris said. “They just kept going deeper and deeper, and he’s fully a very three-dimensional — if I may say so myself — wonderful character.”

Here is everything you should know about Norris after you’ve seen him play Trent in Never Have I Ever.

In the same year that Norris made his Never Have I Ever debut, he joined another on-screen family — that of the Cloud 9 retail workers on Superstore. As Tony, the 17-year-old adopted son to Sandra, the actor left a memorable impact on the show’s final episodes (especially when the ever-casual character sparred with a tightly wound Jonah).

As a modern creator, Norris has made himself at home on several platforms and has appeared in sitcoms, streaming dramedies, and sketches shared on social media. “You need to diversify, and you need to become a double and triple threat,” Norris told his alma mater, Temple University, in 2020. “Making your own stuff constantly, it doesn’t matter if it’s good or bad, you’re exercising that muscle.” In addition to a variety of sketch series on his YouTube channel, Norris has also appeared in several scripted BuzzFeed videos starting in 2015.

Norris Is Engaged To A Fellow Actor & Creator

As Norris revealed on NightCap Live in 2020, he moved in with his girlfriend Carolyn Gilroy right as the COVID lockdowns began last March, and the unexpected event proved to be a creative boon for the pair. “We’ve been collaborating together for the first time ever,” Norris said of Gilroy, who is related to the filmmaker Dan Gilroy. “She’s a very talented writer and actress.” Even though most couples probably didn’t spend the pandemic writing plays, working together on sketches, or starring in breakout roles on Netflix, Norris revealed that the pair also turned to several tried-and-true ways to “stay sane,” including going to the park and cooking.

On March 20, 2022, Gilroy and Norris shared that they were engaged. She shared a photo of Norris on one knee while their dog looked in the other direction, accompanied by the comedic caption, “Foster couldn’t care less that we are engaged.” Norris shared the same photo to his feed with the caption “I hope Liam Neeson isn’t around cause she’s taken. 💍.”

More like this
Nicola Coughlan Shared A Lady Whistledown Excerpt From ‘Bridgerton’ Season 3
By Grace Wehniainen, Alyssa Lapid and Sam Ramsden
Netflix Reveals First Look At Wednesday In The 'Addams Family' Spinoff Series
By Bustle Editors
Here’s Everything Coming To & Leaving Netflix In October
By Jake Viswanath
Caleb McLaughlin Details Racism From 'Stranger Things' Fans
By Radhika Menon
Get Even More From Bustle — Sign Up For The Newsletter

This article was originally published on July 21, 2021