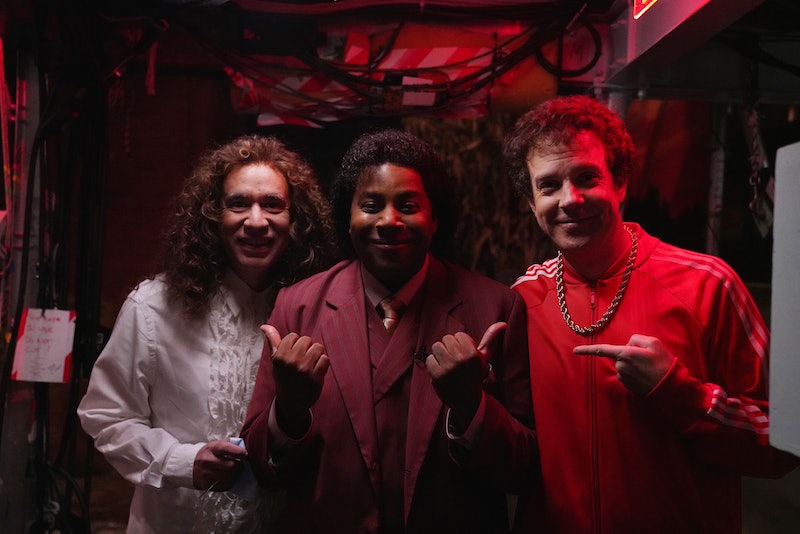 The past few weeks have seen a slew of celebrity cameos on Saturday Night Live — from the KarJenners to professional athletes to 007 himself, Daniel Craig. And for his Oct. 23 homecoming on SNL, Jason Sudeikis did not disappoint in the surprise visitors department. During a “What Up With That?” sketch (a recurring favorite during Sudeikis’ original run on the show), the Ted Lasso star reprised his role as the goofy, dancing Vance, while Fred Armisen returned with his lively sax skills.

Now, the whole point of this sketch is that the fictitious talk show’s host (Kenan Thompson as Diondre Cole) is so obsessed with the program’s pageantry — and singing “what’s up with that?!” over, and over, and over — that there’s not actually much time to hear the guests speak at all. But nevertheless, the celebs are there anyway, usually just as confused by the chaotic talk show antics as we are. The Oct. 23 lineup featured a few very familiar faces: Dune star Oscar Isaac, model-author Emily Ratajkowski, and Succession’s very own Cousin Greg himself, Nicholas Braun.

Because this was SNL’s Halloween episode, the visitors sported costumes to celebrate: Isaac in a pirate hat and hook, Ratajkowski in cat ears, and Braun in, well, a suit — he didn’t get the dress-up memo, but Diondre thought he was actually Lindsey Buckingham in a Cousin Greg costume. (In past iterations of the sketch, Bill Hader played Buckingham, hence the “confusion.”)

Isaac got to talk a bit about his recent flurry of roles — in Dune, The Card Counter, and Scenes from a Marriage — before being cut off. “You know, there’s like a sense of poetry to them,” he said, speaking louder to match the building percussion. “They all deal with pain and loss, confusion ... for me it’s all about whether there’s room to explore something interesting, you know —” And, cue the noise. If you want to know Isaac’s actual thoughts on Dune, head to The Tonight Show. This is Diondre Cole’s territory, so you know Thompson had to break out into another musical interlude.

SNL shared a photo of pirate Isaac behind the scenes.

Thompson, who dreamed up the chaotic talk show in 2009, also shared a backstage snap with Armisen and Sudeikis.

While Isaac had a chance to say something, at least, Ratajkowski and Braun didn’t get in more than a few words apiece. “I flew out for this?” asked the My Body author, while Braun kept insisting that he was not actually dressing up as Cousin Greg. Here’s hoping his onscreen cousin Roman Roy, aka Kieran Culkin, will be able to speak a little more freely when he hosts Nov. 6.

More like this
‘SNL’ Finally Spoofed Nicole Kidman’s Weirdly Beloved AMC Ad & Nailed It
By Stephanie Topacio Long
How Much Are The 'Schitt’s Creek' Stars Worth?
By Hugh McIntyre
Jonathan Bailey’s BTS ‘Bridgerton’ Photos Celebrate 6 Months Of “Kanthony”
By Stephanie Topacio Long
'Grey's Anatomy's New Intern Got Advice From Dr. Bailey Herself
By Grace Wehniainen
Get Even More From Bustle — Sign Up For The Newsletter