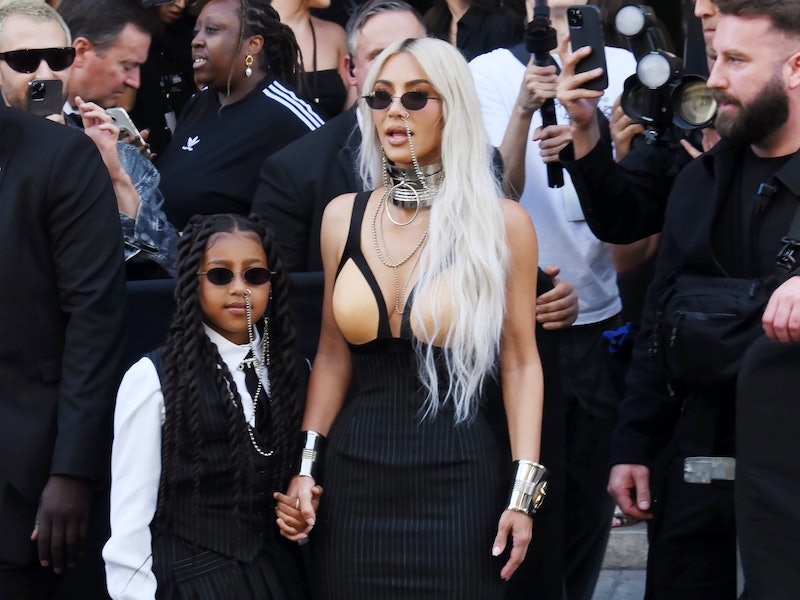 North West is making a great case for being crowned the Princess of TikTok — at only 9 years old. On Dec. 1, Kim Kardashian’s daughter took to their joint TikTok account to share a video of her recreating Wednesday Addams’ viral dance from the new Netflix series Wednesday, which fans have set to Lady Gaga’s 2011 deep cut “Bloody Mary.”

In the TikTok video, North lipsyncs the pre-chorus of Gaga’s Born This Way track, sporting a gothic-inspired black T-shirt. The video then transitions into a black-and-white filter, with North now donning her best Wednesday Addams ensemble — including black eye and lip makeup and a wig with pigtails and bangs — and showing off her spooky dance moves.

The Tim Burton-directed series premiered on Nov. 23, and one of the main moments that fans are loving is Wednesday Addams’ eye-raising routine at her school Nevermore Academy’s Rave’n Dance, which was choreographed by star Jenna Ortega. “Thanks to Siouxsie Sioux, Bob Fosse’s Rich Man’s Frug, Lisa Loring, Lene Lovich, Denis Lavant, and archival footage of goths dancing in clubs in the ’80s,” she wrote on Twitter. “Helped me out on this one.” The routine is actually set to The Cramps’ song “Goo Goo Muck,” but TikTok users have chosen to go with Gaga instead.

Wednesday Addams approved this TikTok trend via the show’s Twitter account. “I see you doing my dance moves to @LadyGaga’s Bloody Mary,” the account wrote. “I understand she is followed by little monsters. I approve.” Gaga jokingly responded to Wednesday’s tweet with an invitation. “Slay Wednesday! You’re welcome at Haus of Gaga anytime,” she wrote, before adding in parentheses, “and bring Thing with you, we love paws around here.”

With Kardashian’s help, North has amassed more than 10 million TikTok followers, and she’s doing a great job providing them with constant content, much of which feature her mom. Aside from doing viral dances, North also gives peeks at her life, like sharing skincare and ponytail tutorials, footage from a Christmas sleepover party, and even her dancing with Lizzo backstage at a show.

North’s controversial father Kanye West is not a fan of her TikTok presence, even criticizing his ex-wife in February for letting their daughter use the social network. Kim quickly responded to Kanye’s claims on her Instagram Story. “Kanye’s constant attacks on me in interviews and on social media is actually more hurtful than any TikTok North might create,” she wrote. “As the parent who is the main provider and caregiver for our children, I am doing my best to protect our daughter while also allowing her to express her creativity in the medium that she wishes with adult supervision — because it brings her happiness.”

More like this
Taylor Lautner Thought Taylor Swift's 2009 VMAs Interruption Was A "Skit"
By Alyssa Lapid
'Wednesday' Star Emma Myers Thinks A Wenclair Storyline Is “Possible” In Season 2
By Alyssa Lapid
Everything You Need To Know About Kanye's Post-Kardashian Dating Life
By Bustle Editors
Ashton Kutcher Wants Danny Masterson “To Be Found Innocent” In Rape Retrial
By Jake Viswanath
Get Even More From Bustle — Sign Up For The Newsletter
From hair trends to relationship advice, our daily newsletter has everything you need to sound like a person who’s on TikTok, even if you aren’t.