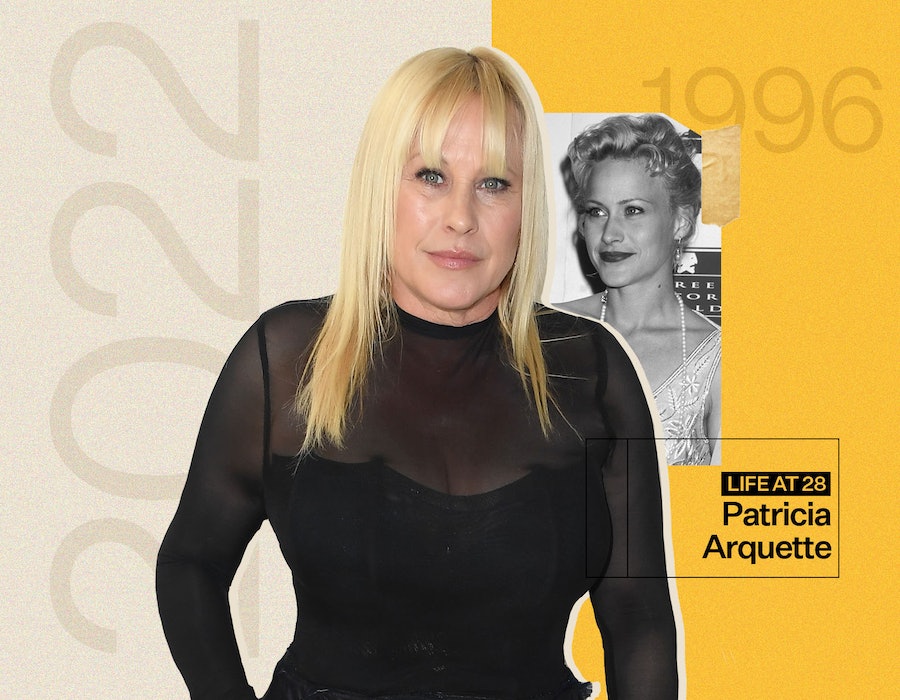 From the outside, 1996 appeared to be a banner year for Patricia Arquette. She was newly married and fresh off of shooting a new David Lynch movie, Lost Highway. Her turn as a harried new mom alongside Ben Stiller in the David O. Russell screwball comedy Flirting with Disaster was a critical success. But ask Arquette about the year she turned 28, and the voice on the other end of the line takes a long pause.

“My life was very chaotic and sad,” Arquette, 54, admits. Her relationship was rocky; her mother had recently been diagnosed with breast cancer. She had a young son at home to take care of. “I felt like I was not able to satisfy even the concept I had in my own mind — which is kind of old fashioned — about how I wanted to parent and what I wanted my relationship to be like,” she says. “I felt like I was kind of failing a bit in every category.”

The drastic disconnect between the success in her working life and the struggles in her home life was isolating. It’s a sensation that the workers at Lumon Industries, the mysterious corporation at the center of Arquette’s Apple TV+ series Severance, will never experience by design: employees at the company agree to undergo “severance,” a surgical procedure that literally splits their brains to divide their work and home lives so strictly that neither persona has any recollection of the other.

The project marks the reunion of Arquette with her Escape at Dannemora director Stiller, who directs six of Severance’s nine episodes. It’s also a throwback to when Arquette was 28, when Stiller played her onscreen husband in Flirting with Disaster. “It was fun working with Ben as an actor; it's totally different than as a director,” Arquette says. “And honestly, he was so different as a director on [Escape at] Dannemora than on Severance, too.” Hold on — has Ben Stiller been severed?

Below, Arquette reflects on working with crying babies, the difficulties of doing nude scenes, and splurging on multiple pairs of shoes.

Take me back to 1996. How were you feeling about your life and career?

There was a lot that was happening. On one hand, everything was very exciting and I was working with the kind of filmmakers I really wanted to work with. I was working with David Lynch, this amazing filmmaker; David O. Russell, this amazing filmmaker. But I was also struggling being a mom with a young kid and I was in a relationship that wasn't really working out for anybody. My mom had been diagnosed with breast cancer and she was pretty sick and doing a lot of alternative treatments, and that was rocking my world. Emotionally, I felt like I was being pulled in a lot of different directions.

I also felt a little bit like a fraud, because when you lose people or people are sick or real trauma is happening in your life, you don't necessarily feel confident to talk about that publicly. And you're supposed to show up at these red carpet events and do your job and promote things. And sometimes it's in opposition to what's really happening in your life.

What did you learn from that time, and how have your ideas of what it means to be a parent or a partner changed since then?

My kids are grown up, so I don't really have to confront that so much in my daily life. If I was in that situation again right now, I don't know that I’d feel all that different about it. I do think I probably have very unrealistic expectations of myself. Would I be easier on myself right now? I doubt it, because I'm pretty hard on myself in general. And that goes from work all the way through every aspect of my life. I don't cut myself that much slack.

It's full circle to be talking to you about the year that Flirting with Disaster came out, given that you’re still working with Ben Stiller on Severance. Are there any moments from working on that movie that stand out?

We sang a lot of Jesus Christ Superstar [on the Flirting with Disaster set] before we’d roll. It was funny because I was already a parent, but when we did Flirting with Disaster, in a lot of the scenes I wasn't written as holding the baby. But I would de facto end up holding the baby, because the baby would be crying and I was the best one to get the baby to not be crying. At first I was like, oh my God, this is so ironic that I'm holding the baby all the time. It works, I think, for the story. And as an actor, it kind of worked for me too to juggle these two things because the majority of parenting and responsibility was falling on [my character’s] shoulders.

At one point, the baby was crying in the airplane [scene] and everyone was wanting to leave and it was really hot. And everyone was like, Patricia, get the baby to stop crying. I was like, Hey, hey, hey, first of all, I'm not even written in the scene to be holding the baby, but here I am holding the baby! The baby tells the truth. The baby doesn't want to be here right now. It's hot on this plane. I can't control a baby!

You were also finishing filming Lost Highway with David Lynch that year, which must have been interesting.

Part of why I did that, obviously, the number one reason was to work with David Lynch. It's also, to me, this story about looking at the sexual power of women through the eyes of this misogynist. That was very interesting to me.

I also had real phobia about nudity and I'm a very modest person. I wanted to deal with that myself and see if I could confront my own demons on that. I didn't know where that came from in me — if that was my own nature to be modest, [or] if that came to me from damage from when I was a little kid and being sexually assaulted growing up — not with my family, thank God. I kind of wanted to just be done with all of that and I also [didn’t] want any of it holding me back as an artist.

So did it hold you back? How did you feel after it all?

Well, it was a struggle for me the whole time. I talked to David about it and I knew that was the material, so it wasn't like I was being forced into something, but I was forcing myself into something that was not my nature. But I also was wondering what my nature was before all this influence and impact of other things. It was a deeply personal exploration.

This was a busy and difficult time in your life, but what kinds of things you did for fun, or to relax?

I think my parenting self was always going into overdrive when I wasn't working, so a lot of what I would do would be making Easter baskets and treasure hunts, [or] making Halloween costumes by hand until late at night. That kind of stuff really made me happy. It still does, honestly.

What kind of crafting makes you happy now?

I'm working with an artist. I'm making some glass projects. During the pandemic, I tie-dyed everything on Earth — sheets, towels, napkins. I was tie-dyeing my days away. I write. Those are kind of the things that are more self soothing to me.

Was there anything you splurged on at 28?

I always splurged a bit on shoes, if I'm honest. I was like, that crazy car you have costs a lot of money, but I could buy a thousand pairs of shoes or 10,000 pairs of shoes for the amount of money a car is! And shoes are like the cars for my feet.

I didn't really splurge on anything until I turned 40, and then I did buy a used Porsche. After I drove away, I was like, am I really driving a Porsche? This is so typical. I'm having a midlife crisis!

What was your biggest regret at 28?

I just couldn't figure out how to make my life work. I'd been in a series of relationships that were pretty unsatisfying, and I always felt like I was coming up short no matter how hard I tried. And I was still in that time in my life where I felt like if I just changed myself and worked harder and did more, I could fix things.

I would say, knowing what I know now, things are too hard. You can't change people and you can't fix everything by yourself. And I was pretty committed to working on and fixing and trying to change and force everything to work that didn't work.

Did the demands of fame and living in public contribute to that feeling of pressure to make things work, or to stay in your relationship? I know there’s a lot of Hollywood lore around your marriage to Nick Cage.

Here's the thing. I don't even want to talk too much about that relationship because I want to give it its own privacy, and I also feel like I don't want my story to be tied down to a man's story. [But] the people pleasing aspect of my nature, which I imagine was largely taught to me by my family dynamic and the time I grew up in society, extended well into my career and to every aspect of my life. So it wasn't really about one particular relationship. It was across the board. That aspect of myself made things pretty rough.

I would say you can't fix everything. If something feels like a compromise to your values and what feels good and safe, you don't have to do it. And integrity matters. You also can't do everything for everyone. My kids have always said to me, “Mom, if there's one thing I wish you would do different, it's take more time for yourself, your friends, and have fun.” So I think that I would say to myself — maybe get a little jumpstart on that putting yourself first bit.

What do you think your 28-year-old self would think of the person you've become?

Looking back on it now, maybe without all that difficulty, you couldn't get to where you [are now]. So maybe it was all supposed to be like that — imperfect in years.

More like this
At 28, Debra Jo Rupp Was Living A Much Different '70s Show
By Grace Wehniainen
At 28, Rosie Perez Risked Her Career To Stop Playing Stereotypes
By Gabrielle Bondi
Here’s Everything Coming To & Leaving Netflix In February
By Jake Viswanath
'Ted Lasso' Season 3 Might Be Its Last
By Zosha Millman and Grace Wehniainen
Get Even More From Bustle — Sign Up For The Newsletter
From hair trends to relationship advice, our daily newsletter has everything you need to sound like a person who’s on TikTok, even if you aren’t.