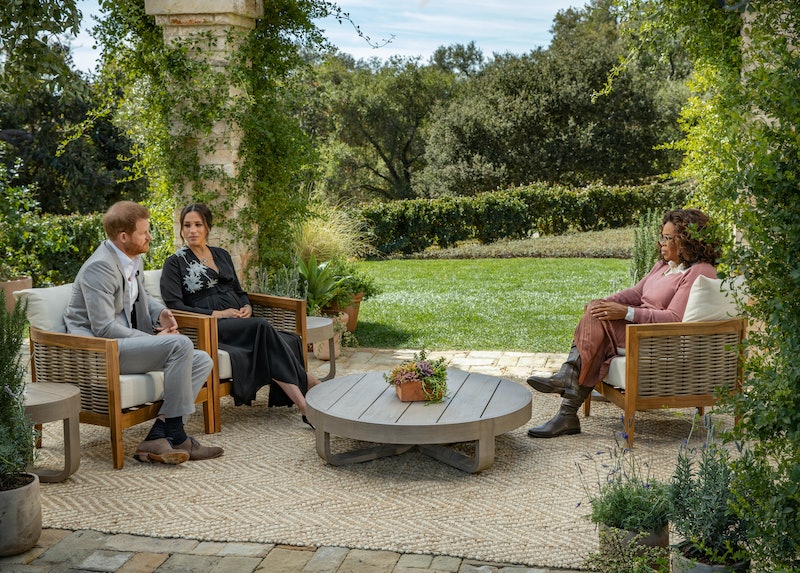 There's been a lot to process since Prince Harry and Meghan Markle's landmark interview with Oprah Winfrey aired in the U.S. last night (March 7). The two-hour interview contained many shocking revelations from the couple and included an in-depth discussion about Meghan Markle's treatment from British media and members of the royal family. In a newly released clip from the special today (March 8), Harry confirms racism was a "large part" of why he left the UK.

Harry and Meghan stepped back from their roles as senior roles and moved to California with their son Archie more than a year ago, and have subsequently had their royal patronages removed. During their interview with Oprah, Harry was asked directly whether the couple's much publicised exit was due to racism.

"Did you leave the country because of racism?" asked the media mogul.

"It was a large part of it," replied Harry, who went on to recall a conversation with a person at a fundraiser about the British press and bigoted views in the country.

"[This person] said, "You need to understand that the UK is very bigoted,'" Harry shared, "And I stopped him and said, 'The UK isn't bigoted, the UK press is bigoted, specifically the tabloids.' And I said, 'Is that what you mean?' He goes 'No, the UK is bigoted.'"

Harry went on to say he completely disagreed with this person's views. He added: "But unfortunately, if the source of information is inherently corrupt, or racist, or bias, then that filters out into the rest of society."

Meghan, who is mixed race, has talked openly about the relentless scrutiny she received at the hands of the British media during her time in the UK (and still to this day).

Also in the interview, Meghan detailed the depths of her mental health struggle — a struggle so serious, she said, that she "didn't want to be alive anymore." Meghan also described the time she sought support from "the institution" of the royal family and their human resources team but was told that it wasn't possible for her to receive professional help.

More like this
Prince Harry Will Be Able To Wear His Military Uniform After All
By Darshita Goyal and Sam Ramsden
Oprah Winfrey Revealed Her Hopes For Prince Harry & The Royal Family
By Maxine Harrison
10 Photos Of William, Harry, & Their Cousins Honoring The Queen Together
By Stephanie Topacio Long
King Charles Ensured These Subtle Tributes Were Included In Queen Elizabeth’s Funeral Wreath
By Sophie McEvoy
Get The Very Best Of Bustle/UK