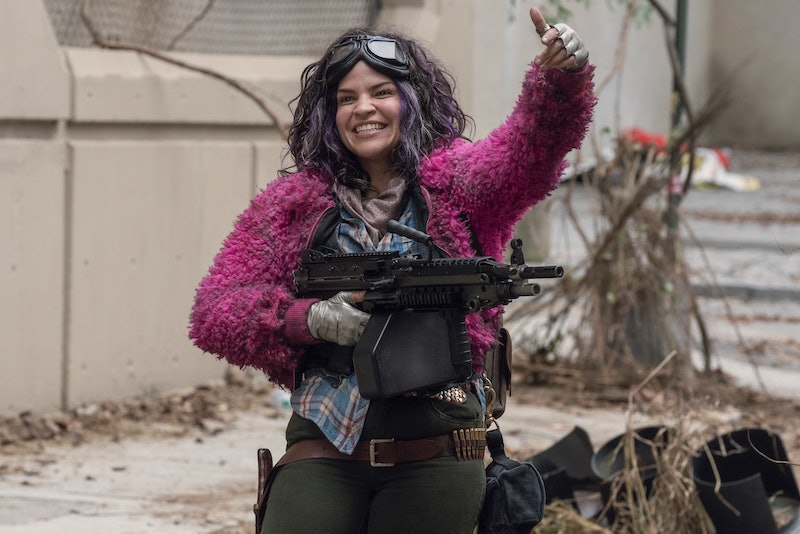 It may feel like a long time ago now, but Juanita — aka Princess — was only introduced to The Walking Dead earlier in Season 10. Eugene, Ezekiel, and Yumiko met her while they were passing through her city on their way to the Commonwealth, and the last we saw, she and the group were receiving a not-so-warm welcome from the soldiers there. But we haven’t seen her again since Season 10c picked up.

The trailer for the upcoming episode, “Splinter,” suggests we’ll get a closer look at Princess’ struggle for survival. And while there’s still a lot we don’t know about the character, her comic book counterpart has plenty of history to pull from. Here’s what you need to know.

Princess’ Story Before Meeting The Group

From her introduction on the show, we know that Princess was alone in the city for one whole year before encountering her new friends. This has apparently led her to question her own reality, wondering aloud if Eugene, Ezekiel, and Yumiko are really there or if she’s hallucinating them. She also acknowledges that she was told she’s “hard to love” before, which explains why she’s so eager to make (and keep) new friends.

That’s only the beginning of Princess’ sad past. As we learn from the comics, she experienced abuse from her stepfather and stepbrother but didn’t receive help from her mother, who “was just happy she wasn’t alone anymore.” Now an adult, Princess feels the complete opposite from her mom, saying she’s “not like” her and would “rather just be alone.” The fact that Princess is so OK with solitude seems to emphasize how much she likes her new friends — because if they weren’t good people, or at least potentially good people (remember, she only recently met Ezekiel and co.), she wouldn’t stick around.

Princess a vibrant person unlike anyone else we’ve seen in The Walking Dead. Her purple ensemble sticks out against the backdrop of a gray, decaying city, serving as a reminder of her bright and bubbly demeanor. In the comics, Princess explains that the reason she is so playful and happy is because she wants to help create a positive environment for those around her. Knowing her past experiences, it makes sense that she would want to help others avoid the pain she endured.

Princess and The Commonwealth

Though viewers have only just met the Commonwealth via its “welcome wagon” of soldiers, comic readers know that Princess has a complicated relationship with the new community. Its luxurious trappings and elevated society (by apocalypse standards) are impressive, but she doesn’t want to partake in the conflict that ensues there. Plus, there’s not a lot of time between when Princess is introduced in the comics and when the series ends, so she doesn’t quite get the chance to rise to the ranks of long-standing characters. However, she does end up OK, outliving even Rick and enjoying a relationship with a Commonwealth soldier named Mercer. Only time will tell if Princess’ Walking Dead arc follows that of her comic book counterpart.

More like this
Nicola Coughlan Shared A Lady Whistledown Excerpt From ‘Bridgerton’ Season 3
By Grace Wehniainen, Alyssa Lapid and Sam Ramsden
An 'Everything Everywhere All At Once' Star Just Joined The 'Loki' Season 2 Cast
By Grace Wehniainen
The New Bachelor Will Be Announced Next Week & Here Are The Top Contenders
By Grace Wehniainen
Viserys’ Fate On 'House Of The Dragon' Could Differ From The Book In This Surprising Way
By Grace Wehniainen
Get Even More From Bustle — Sign Up For The Newsletter