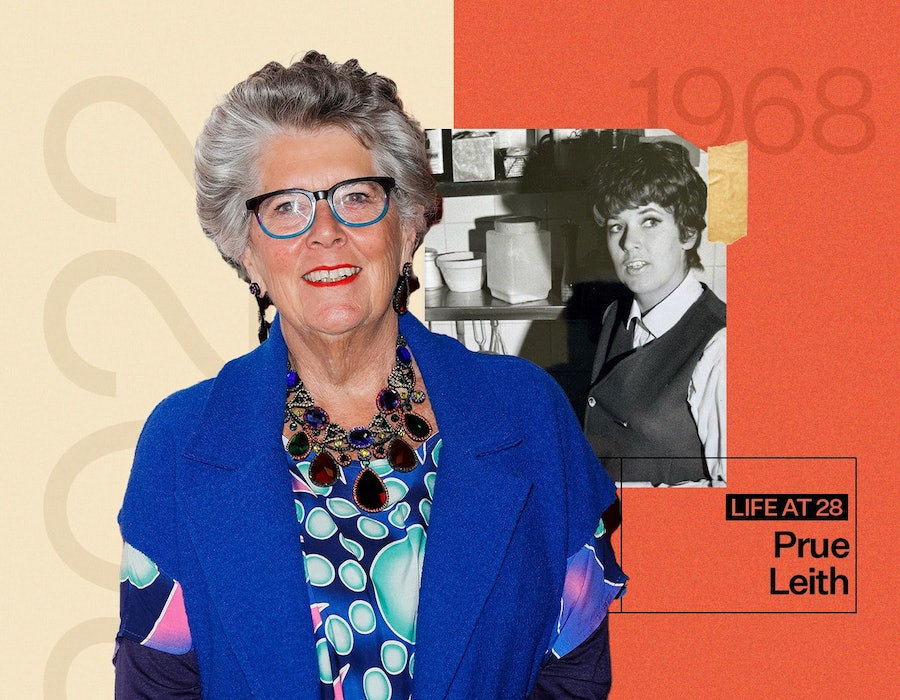 Dame Prue Leith definitely would have watched The Great British Bake Off at 28, she tells Bustle — if it had existed and if she’d owned a television. But she wasn’t wanting for a hobby in 1968. The chef was busy preparing to open Leith’s, her first restaurant, located in London’s Notting Hill neighborhood. “All the London restaurants, if they had good food and were really smart, were so snobbish that they wouldn’t let anybody in if they didn’t have a jacket and a tie,” Leith says. “So I wanted to have a really good restaurant but with the informality of a bistro or a pub.”

With brick floors, ceilings covered in turquoise carpet, and theater lights on the tables, Leith’s was still a work in progress — as was its namesake, a caterer who spent nights on the serving side of the bar. “[I’d be] flipping the burgers or organizing the pig roast,” she says. “I would be the one sweeping the bloody floor in the middle of the night. I’d be backing up the van.” She was also in the midst of a 13-year affair with Rayne Kruger, a family friend. They’d later marry and share two children. “It was all on the way,” she says. “I was in love with a wonderful man. I was building my business. I was really successful. I think I had a huge amount of luck just because I was the first woman to have a serious restaurant in London, so I had a lot of publicity.”

It would be decades before Leith, now 82, achieved the kind of ubiquity that comes with hosting The Great British Bake Off, a gig she’s had since 2017. But her onscreen career technically started in her late 20s, when a friend at the BBC approached her for help practicing the broadcaster’s transition to color with a fake cooking segment. She was tasked with demonstrating a risotto, only the studio didn’t have a stove set up — just a table with four burner rings painted on it. “I galloped through my demonstration at a terrific lick, partly because I was nervous and partly because there was no waiting for anything to happen,” she recalls. That first outing was prophetic of Leith’s delicious onscreen career to come.

Below, Leith talks about having a secret relationship and entertaining her famous neighbors with the munchies.

I was really excited because I was trying to put my first restaurant together, which I opened the following year. I was determined to have a restaurant before I was 30. So I did.

Why was that? Thirty is young to have a restaurant of your own!

It’s interesting, isn’t it? People talk about how terrible it is turning 40, but I loved turning 40. That was fine. But turning 30 — I was working really hard. I had come from South Africa, I’d set up my little catering company. I was still working out of my mews cottage. But I’d always wanted to open a restaurant, and by the time I was 28, I figured I could probably do it.

Where did you call home at the time?

At the time, I was in love with a guy who was married. I was once asked by a newspaper whether I would recommend adultery because it seemed to do me good. But I said the fact that I couldn’t be with this guy all the time was really helpful. I saw him when I could, but I didn’t have to cook for him. I didn’t have to keep house because I worked at night and I worked on weekends.

So you weren’t cooking for a guy — what would be your go-to meal for yourself?

Because I was catering all the time, I lived on other people’s leftover bits and pieces. I do remember one friend coming to supper one night, and for some reason, we didn’t have the usual leftovers, and I didn’t have time to put it all together. So I just went and bought a couple of Birds Eye ready meals — which I think are about the only ready meals I’ve ever eaten in my life. She was so shocked that I should produce this roast dinner in a tin foil tray. And you know what? It was delicious. It was perfectly good food. But she was deeply shocked and told all her friends that I served ready meals.

What music were you into at 28?

It was the Rolling Stones, The Beatles — I was still mad about Elvis Presley, who was rather before that. The Beatles’ “Lucy in the Sky with Diamonds” is just one of the best songs ever written. I had a little mini car with darkened windows so that I could drive around London pretending I was a VIP. I would turn on the radio as loud as I could with “Lucy in the Sky” and just feel fantastic. The fact that I was delivering sausages to a building site for a lot of workers celebrating getting the roof on — not quite so glamorous. Though in my mind, I was a movie star.

The Great British Bake Off is such a comfort show for people. What brought you comfort at 28?

It sounds extraordinarily simple, but I still do it. At the time, yogurt had just become a big deal. There was a company called Ski Yogurt, and they used to do a hazelnut yogurt. If I was feeling down or tired and couldn’t be bothered to cook, I would get into bed with a book and a pot of yogurt, and a cup of tea. What could be more innocent and simple than that?

Nowadays, I’d probably want a glass of red wine for comfort. I’ve just done a one-woman show [Prue Leith: Nothing in Moderation] last night at the Kirk Douglas Theatre in LA, and it went so well. And it was such a high when I got off stage — but of course, what I wanted was a large glass of red wine. When I was 28, it wouldn’t have occurred to me.

Is 28 an era you’ve been reflecting on in your performance?

There’s a lot about that period. I was very happy, I didn’t want to get married, the wanting-children bug hadn’t arrived yet. I had a lot of friends. At the time, my next-door neighbors were a pop group called The Hollies. They were great fun, and I used to occasionally go to their concerts. They used to hide their marijuana on my herb shelf.

Of course I was! I didn’t smoke it, but they used to come home after a gig, having been up all night, and they would be high as a kite. And I remember one of them standing, looking at an apple pie I’d made. He just kept looking at this pie, saying, “I’ve never seen anything so beautiful in my life! It sparkles. And it’s moving.” They were away with the fairies.