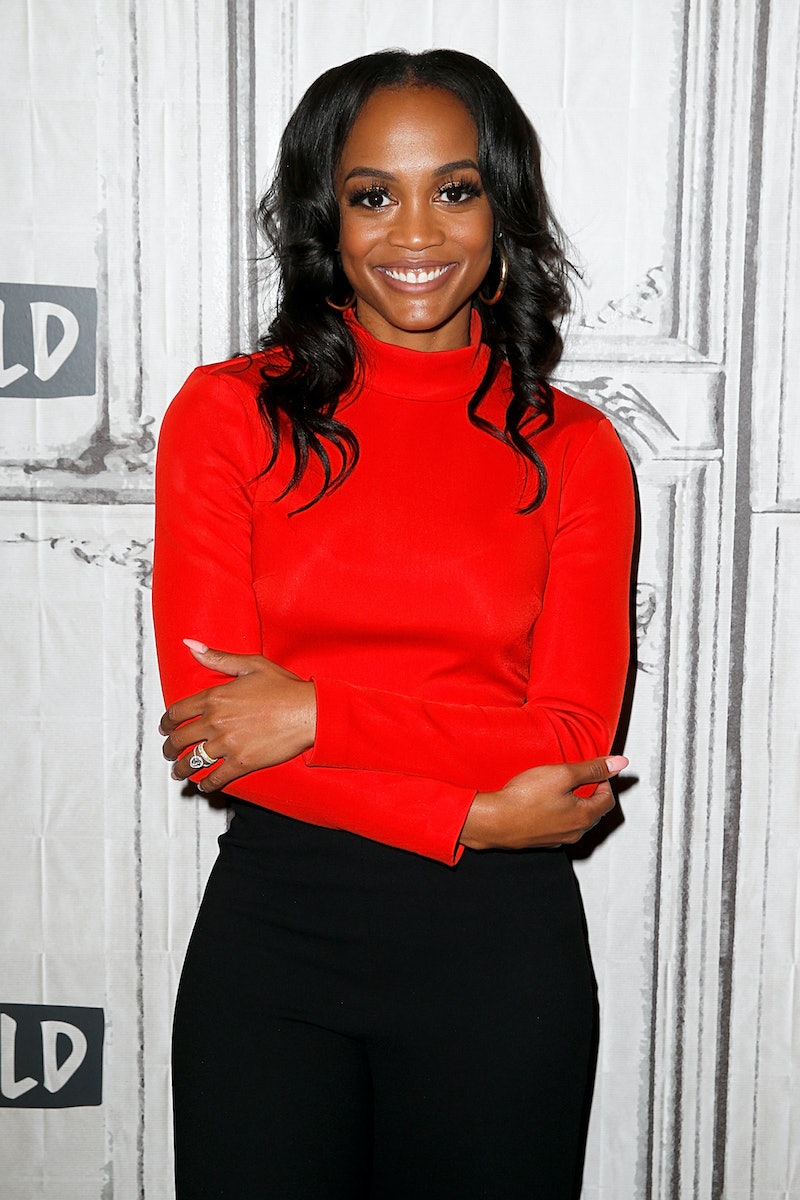 This former Bachelorette will continue to stand up for herself and others. Rachel Lindsay returned to Instagram on Saturday, March 6 after previously deactivating her account due to harassment amid the Bachelor racism controversy. In her first grid post back, Lindsay shared a photo of sunflowers on her account, alongside an empowering message for followers.

"I want to be like a sunflower so that even on the darkest days I will stand tall and find the sunlight," she wrote in the caption, quoting an unknown source.

Many Bachelor alumni were glad to see the star back on the platform and shared their support in the comment section. Former contestant Kristina Schulman wrote, "Keep flourishing love," and her Season 21 co-competitor Astrid Loch commented, "There she is #bigrachisback." Lindsay's Bachelor Happy Hour co-host Becca Kufrin shared some love as well, writing, "You always do Rach! Love you and that beautiful, fiery spirit so much." Mike Johnson, a franchise fan favorite from The Bachelorette Season 15, wrote, "Welcome back," while former Season 11 leading lady Kaitlyn Bristowe responded to Lindsay, commenting, "You always do" with heart emojis.

Lindsay also posted a photo and video from her first Los Angeles hike on her Instagram story, writing, "Good vibes only."

In February, Lindsay asked Bachelor host Chris Harrison to comment on Season 25 contestant Rachael Kirkconnell's history of racist social media posts during an interview with Extra TV, including photos of the finalist attending an antebellum-themed fraternity party and dressing in Native American attire as a costume. Harrison defended Kirkconnell's behavior and was quickly denounced online. Two days later, the host apologized for the interview on Instagram and announced he would be "stepping aside" from the franchise indefinitely.

Lindsay, who has been speaking out about the lack of diversity both on-camera and behind-the-scenes in the Bachelor franchise for years, received an outpouring of support from current and former cast members amid the controversy. However, the television host was also bombarded with hate and harassment on social media. On Feb. 26, Higher Learning co-host Van Lathan revealed that Lindsay left Instagram "because of how much hate she's getting from Bachelor fans who are spamming her with all kinds of rude and hateful things."

"Rachel is not responsible for Chris Harrison, a 49-year-old man who can't read the room in these 2021 times," Lathan said in an Instagram video. "You're going after the wrong person." He added in the caption: "Is anyone from the entire 'Bachelor Nation' going to stand up and condemn this harassment of a Black woman?"

The Bachelor: After the Final Rose will air on Monday, March 15, with Uncomfortable Conversations with a Black Man author Emmanuel Acho stepping in to host in place of Harrison.