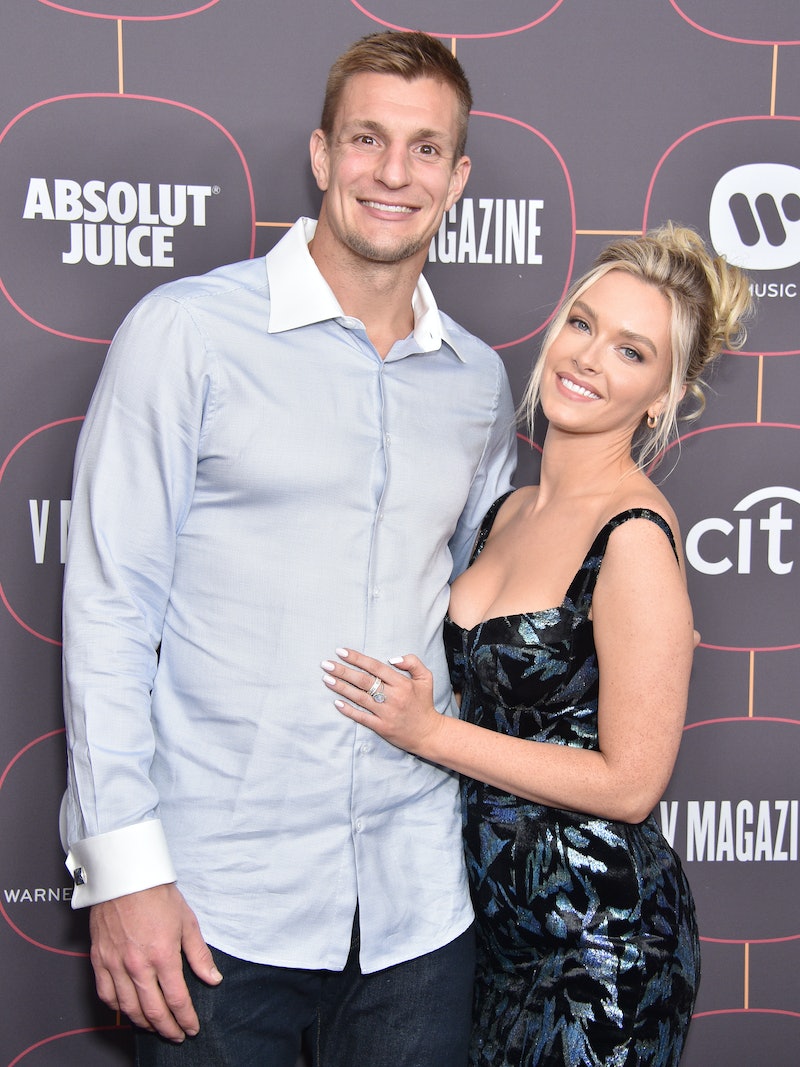 The Tampa Bay Buccaneers have one Super Bowl win under their belt, and there's a chance they could earn another at this Sunday's game in Tampa Bay, Florida. For Buccaneers tight end Rob Gronkowski, a 2021 victory would be his first with the team and his fourth overall. Of course, part of the fun in watching the big game is seeing who is there to support the players. In Gronk's case, look out for his girlfriend, Camille Kostek. Here's everything you need to know about the model, actress, and host:

Though Kostek cheered for the New England Patriots and Gronkowski played for the same team, that's not the beginning of their love story. During an appearance on Live With Kelly and Ryan, Kostek revealed she and Gronk first met at a Thanksgiving charity event in 2013.

In 2015, Kostek told the Boston Globe, "Rob and I have been seeing each other. We're both super busy right now. Obviously, he does a lot and I do a lot." A year later, the couple made their first public appearance on the orange carpet at the Nickelodeon Kids' Choice Sports Awards.

In 2017, there were mixed reports about their relationship status, with TMZ Sports sources claiming the two were "100% not dating, period." But around that time, Kostek confirmed she and Gronk were still romantically involved. On Instagram, she sported a jersey with Gronk's number, which encouraged further speculation into their personal lives. Of course, the two survived whatever drama may have been bubbling up in their relationship back when. Most recently, in Jan. 2021, Kostek posted more pictures of her in a jersey featuring his "87" number. She wrote, "BUCS ARE SUPERBOWL BOUND BABY !!!! BACK TO THE HOME TURF 🏴‍☠️🏈 !!! I ❤️ you eighty seven."

Kostek's resume is jam-packed with a variety of impressive accomplishments. The Connecticut-born model began her career as an NFL cheerleader for the New England Patriots while still attending Eastern Connecticut State University in 2013. One year later, she posed for the cover of the Patriots Cheerleaders' annual swimsuit calendar. Kostek remained on the team until stepping back in 2015.

On top of being a professional cheerleader, Kostek makes a living as a model — she's worked with Reebok as a brand ambassador and appeared on a Sports Illustrated Swimsuit cover in 2019. In 2019, Maxim magazine added Kostek to their "Sexiest Women in the World" list.

She's also tried her hand at jewelry design and motivational speaking. In 2019, she embarked on her university and college "Own It" tour and spoke about self-love and body positivity.

And Acted Alongside Hollywood's Best

As if she's not busy enough, Kostek has appeared in films such as I Feel Pretty and in music videos for Kygo (starring alongside her boyfriend) and Jack Fiskio. Her next big career moves include acting in the coming-of-age sci-fi movie Monsters of California, which former Blink 182 musician Tom DeLonge will direct. Soon, she'll use her interview skills to serve as the on-field host for the 2021 Wipeout reboot.