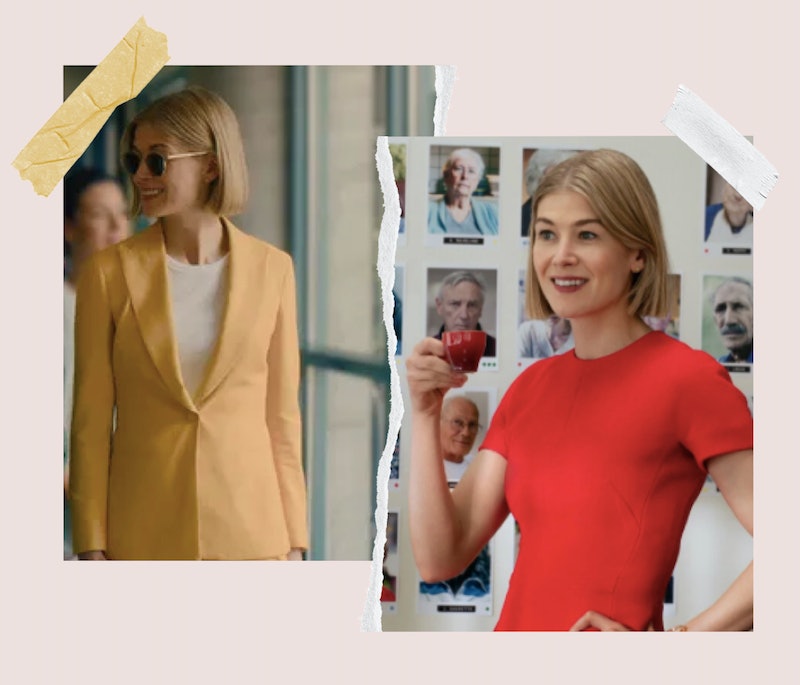 When we first meet I Care A Lot's Marla Grayson (Rosamund Pike), she's being eviscerated outside the courtroom by an angry plaintiff, who goes so far as to spit on her. But despite the hysterics, the ultra-composed court-appointed guardian doesn't lose her cool. Instead, Marla whips back her perfectly angular bob and promises that if he ever tries that again she'll "Rip his dick clean off." Threats aside, Marla exudes the kind of "girlboss"-esque professionalism that allows women in power to be both revered and feared. It's also an energy that helps her easily charm the judge who rules to keep her on as a guardian over the plaintiff's mother. But though her sleek jewel tone courtroom look is much more in keeping with the clean-cut and quietly trendy appearance of a female executive than perceptions of a modern day scammer, in reality Marla is nothing other than a grifter — albeit with much better style.

I Care A Lot follows Marla's work as a court-appointed guardian to the elderly, a role she exploits by falsifying medical issues and then forcing vulnerable old folks into care facilities while she sells everything they own to turn a profit. “She's appalling, but I like her appetite for everything. Her hunger to win, her hunger for success, her hunger to be the best,” Pike tells Bustle. “All these things I don't [possess] myself, so I find them quite liberating to play [on screen].”

Marla uses her appearance to fuel that hunger and manipulate those around her, and clothing is her weapon of choice. “Why do we trust someone in a suit more than we trust someone in a t-shirt?” asks Pike. “We [probably] shouldn't.” Throughout the film, how Marla presents herself gives her power. When she shows up at a potential victim's door in a pastel pantsuit with a cheery smile, she comes across as a dedicated guardian with a passion for helping those in need. But back in her office, Marla rips her vape, screams at colleagues, and exposes herself for the ruthless antiheroine she is beneath her perfect tailoring.

Pike plays Marla with the same icy intensity as she did Gone Girl's Amy Dunne, another iconic antiheroine with a knack for scheming. (In Amy's case, framing her husband for her murder after discovering he cheated.) Both women are acutely aware of the way they must wield their physical appearance in order to achieve their goals. When Amy disappears, deciding to seduce a wealthy ex boyfriend for refuge, she puts on high-end, sexy satin lingerie and dyes her hair peroxide blonde; elsewhere she turns to baggy clothes and tattered bandanas to make herself invisible and nonthreatening while traversing rural America.

Pike’s portrayal of both Amy and Marla brings out their cold calculating side as much as it does the practical realities of being a woman in the world. These women might be villains, but even the most villainous of women have to present themselves accordingly if they want achieve their goals. “Marla's not asking [the audience] for empathy, she's not asking you to like her, she's not giving you a sob story," says Pike. "She's not telling you about how she became a victim in her childhood, she's not asking any of that from you." Instead, she's armoring herself in a sheath dress and is ready to go for what she wants — no matter the cost.

More like this
Everything You Need To Know About The 'Knives Out' Sequel
By Bustle Editors
Lindsay Lohan & Jonathan Bennett Celebrated Mean Girls Day Very Differently
By Jake Viswanath
What’s New On Netflix: Ana De Armas’ 'Blonde' & A Nick Kroll Special
By Arya Roshanian
These 25 International Horror Movies On Netflix Prove Fear Is A Universal Language
By Bustle Editors
Get Even More From Bustle — Sign Up For The Newsletter