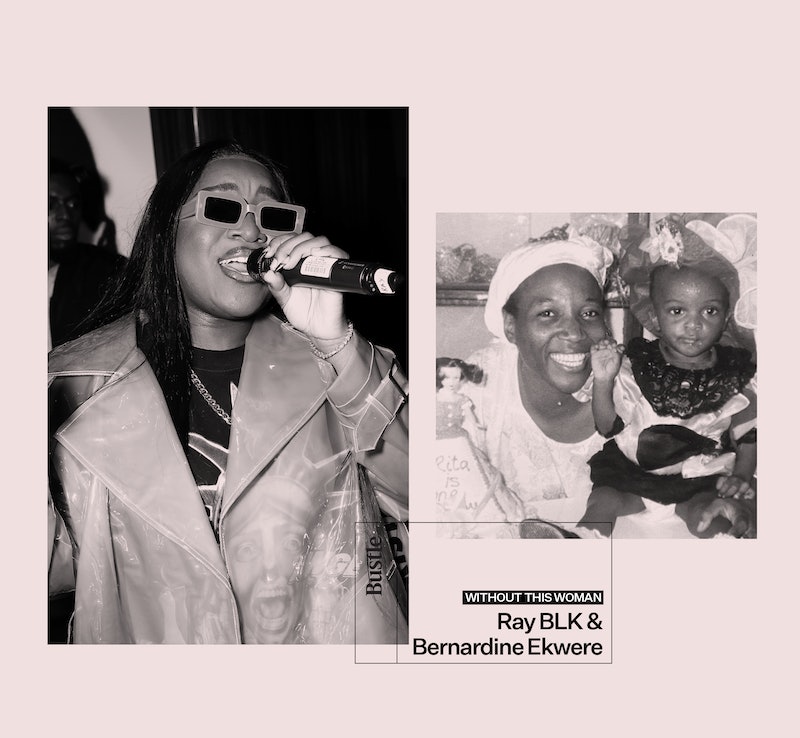 Bustle's "Without This Woman" is a series of essays honouring the women who change — and challenge — us every day. Below, Ray BLK opens up about the woman who inspired her music and helped her find her voice.

My mum only ever really played Gospel music growing up. Outside of Gospel, she listened to just three people: Whitney, Mariah, and Mary J. Blige. That's it! It was only when I became an artist and started writing my own music that I realised how influential this was. Whitney and Mariah were how I learned to sing; my mum never really had the money to pay for singing lessons, so I would just try to replicate what I'd hear on those CDs. With Mary J.Blige, it was the content of the music that inspired me — there was so much pain and strength in her early albums. Looking back, this is where my career first started.

From the age of 14, my mum would take me to auditions. I was mainly going for acting roles, and I actually got offered a role on CBBC. It was for a new sci-fi show, and at 15 it was a very big deal. Unfortunately, my headteacher and mum decided that I had to stay in school to finish my GCSEs. I was heartbroken! Also, I've never shared this, but before I became the artist I am today I was in an all-female, all-Black rock band as a teenager. Seriously!

My mum is very big on education, as most Nigerians are. You could be a millionaire, but if you didn't have a good education, it's not important. She wanted me to finish school, and go to university (which I did), but simultaneously go for my dreams. She said to me, "I know you love this music thing, but you're going to finish school to safeguard yourself. Then after that, follow your dreams."

So, I kept on pushing. I even auditioned for The X Factor at 16. I actually got to the stage before the judges' houses, then heard the words "that's it, the rest of you can go home." And, again, I thought my life was over!

It's funny now, but I didn't leave my room for two days. And, while my mum is soft, she can be hard when it's needed, too. On the second day, she said, "No, we're not going to do this anymore. X Factor didn't happen. You're not the first person, and you're not going to be the last. Get up." I just had to shake it off, and I feel like I've had thick skin ever since.

This perseverance is my foundation; I somewhat naively believed that if you work hard, it's going to happen for you. I was assured that my only disadvantage was myself, based on my work ethic and my talent, and nothing else. Sadly, the reality of the industry is very different.

When I first started making waves in music, I would be told people like me "seldom get these opportunities and we want to see you win". They'd also warn me that this opportunity was fickle, especially for a Black woman, so "hold onto it with both hands." When you repeatedly hear things like that you start to question: "Am I at a disadvantage because of my skin colour?"

This is why I became an ambassador for Power Up — an initiative by the PRS Foundation to tackle anti-Black racism in music, with grants and support for Black music executives and creatives. It's important that the change comes from the gatekeepers of this industry, the people who give artists a platform. I realise that, for people who look like me, they saw me as a symbol of hope. They hadn't seen a darker-skinned Black girl from the UK on Jools Holland or winning the BBC Music Sound poll (2017), and if I can do it, they can do it too. I also want to be a voice that ask: "What are we doing to make things a level playing field?"

It's all just a journey of experience, and self-growth. I had a shaky period around 2018, where I felt lost. However, I've become more vocal, and comfortable in my ideas, and I now understand that I am the captain of my own ship.

With that said, I'm just so grateful to have had an unconventional Nigerian mum, who empowered me to follow my dreams. I am a reflection of mum, a boss who empowers her community. I don't think she realises that I am quite literally a copy and paste of her.

It's because of my mum that in a racist, colourist, and sexist world, I've never felt those things about myself. I'm discovering more and more how powerful that is.

As told to L’Oréal Blackett. This interview has been condensed and edited for clarity.