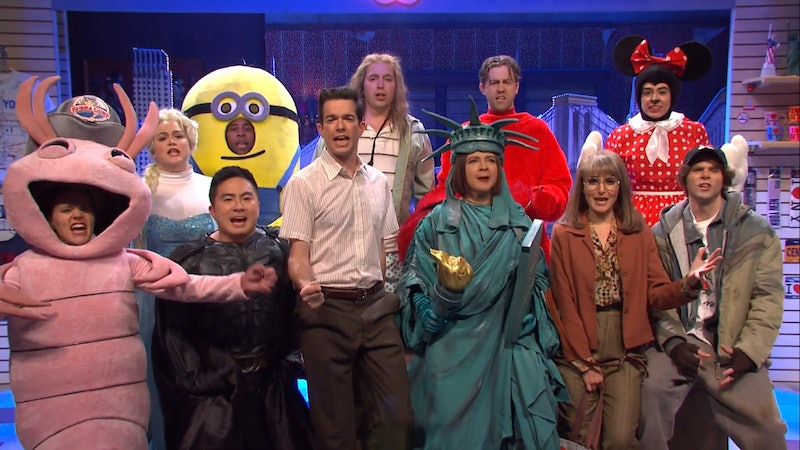 First there was "Diner Lobster." Then came "Bodega Bathroom" and "Airport Sushi." On Oct. 31, fourth-time SNL host John Mulaney added another "New York Musical" to his canon of theatrical sketches. This one was set in a Times Square souvenir shop, where Pete Davidson and Chris Redd were in search of some NYC keepsakes. While Redd's tourist character opted for two snow globes, Davidson made a more questionable choice: a pair of "unwashed" I ❤ NY underwear, which he asked to try on in a fitting room.

Mulaney's perplexed shop owner cryptically told a "Times Square Minion" (Kenan Thompson) to take him to "the back of the store, where the people of Times Square habitate." That, of course, is when everything really went off the rails.

First up was a "Luck Be a Lady" parody called "Mascots Be Shady," featuring a fighting Minnie Mouse and Elsa from Frozen, along with Batman- and Elmo-costumed grifters. The frightening display wasn't enough to deter Davidson from wanting the underpants — or from making a BDE reference. "I love New York, and I want my modest bulge to show that," he deadpanned, nearly breaking character. What followed was a play on "One" from A Chorus Line, complete with such lovely imagery as skid marks, pubic hair bug nests, and a comparison to "shopping at Arby's for pantyhose."

When are things going to bounce back in Times Square? That's what a down-on-her-luck Bubba Gump Shrimp mascot, Shrimp Louie (Kate McKinnon), would like to know, too, as she crooned a "Send in the Clowns" parody, "Send in the Crowds." Meanwhile, Beck Bennett's "Diddler on the Roof" got some screen time, before Maya Rudolph entered as Lady Liberty herself, proclaiming she'd lived through Warhol, Bethenny Frankel, Sex and the City tours, among other things, belting out that she's still here. ("Fools! You don't give up on my city that easy," snapped Rudolph's resilient Statue of Liberty.)

Oh, but they still weren't done introducing all the New York characters. Next, came "that woman from Westchester ... with visible COVID" singing about, what else, but spreading the coronavirus to the tune of "Big Spender."

In the end, Mulaney explained the original briefs were actually a metaphor for America. "Sure, these underpants are riddled with ugliness and disease, but they still stand for something: love," he explained. "That's why I didn't want to sell them; because they give me hope." That may or may not have been a great segue to the presidential election-themed grand finale.

Even though Broadway will remain closed at least through May 2021, SNL gave theatergoers some hope that the show will go on.