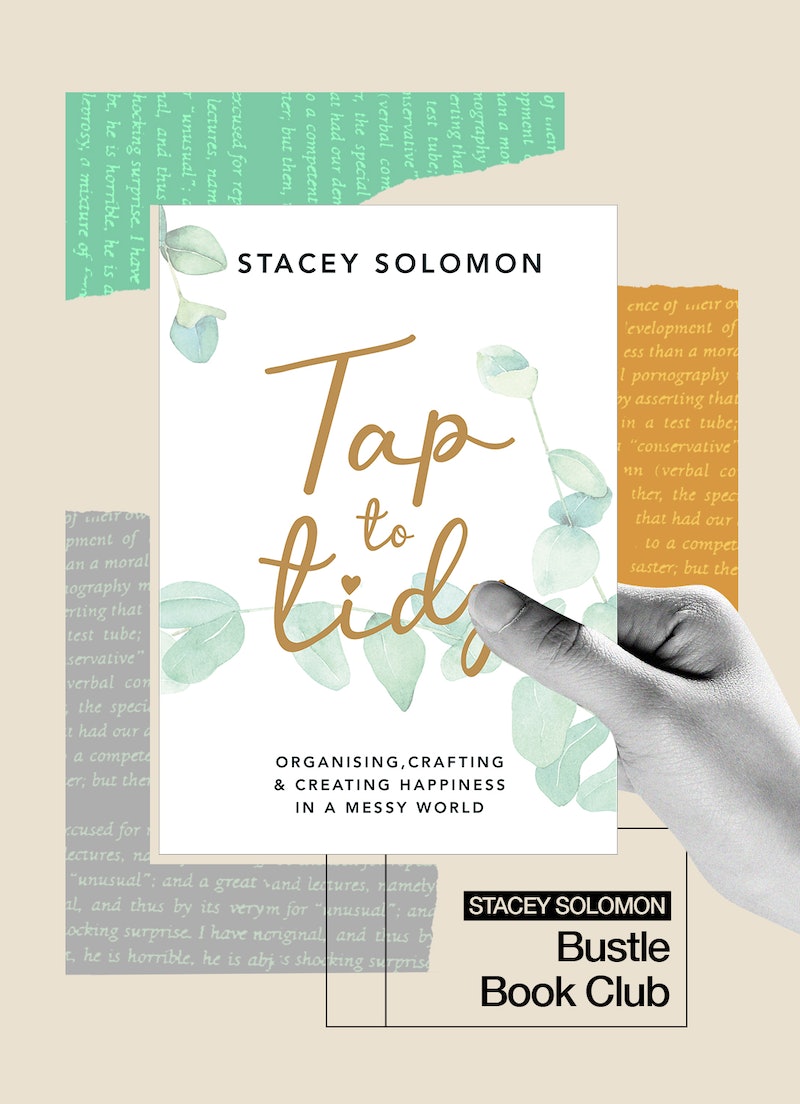 When people began messaging Stacey Solomon asking whether she was planning to write a book, she was gobsmacked. The 31-year-old mum of three (six if you count the pets, seven when fiancé Joe Swash’s eldest is there) had just been doing what she loved. Finding a moment of calm in tidying, organising, upcycling was second nature to Solomon, it had to be. “To find a little drawer and meticulously organise it feels like I'm in control of that drawer,” she says. “The rest of my house might be an absolute pit, but this one drawer, this one cupboard, is beautifully presented and shining. And there is a joy in that for me.”

This joy is regularly shared with the 4.1 million followers she has amassed on Instagram. Before the book, before Tap To Tidy evolved from a social media featurette into something much bigger, the singer and TV host was chronicling her crafting and daily declutters on Stories. The satisfaction of a freshly spruced corner or project reaching completion was, is, communal — Solomon’s DMs are always open, not in an attempt to appear approachable, but because she really, truly is. “I get so much out of having those conversations with people [on Instagram] and having someone to talk to,” she says, “and they get something back too.”

After a year that’s turned lives upside down, finding a safe space amid the chaos has become more important than ever. “I wouldn't even want to pretend to understand how out of control some people are feeling at the moment” Solomon says, “there is no magic wand that's going to make any of that better and it would be wrong of me to say that there is.” But for many – perhaps many more than she would think – Solomon’s online community has been that safe space. That’s who Tap To Tidy is for. “[Everyone] deserves to have that moment of peace where you're not thinking about anything other than the task at hand,” she says of coping with the new and often unbelievable pressures that the last year has brought. “Whether it be organising something, or making something, or writing something, or even go for a run” she says, “I think sometimes it can feel like you're in control of those little moments, even when you're so out of control of everything else around you.”

Below, Solomon reflects on crafting when you think you can’t, finding a second family on Instagram, and throwing herself into every opportunity, one hundred and ten percent.

I lay down [to go to sleep] sometimes and I sit there thinking, "What about this? Haven't I got to do that tomorrow? Maybe I should ask Joe." And I can sit for an hour before I look at my phone and go, "What am I doing?" So I started drawing little wheely bins and I called it my brain junk — I'll put everything in there at nighttime and just say goodbye to it. It just makes me feel like I'm throwing [the thoughts] away. I'm literally going, "Right. I'm throwing that [thought] away because it's unnecessary."

On giving every opportunity her all:

I don't do anything half heartedly. I really care about the things and the projects that I do because I don't feel like everyone gets the opportunity to do them. People might argue, "You make your own luck." No way. I'm so lucky, even just to have been able to go on The X Factor and be exposed to the platform that I was exposed to. So I do try and throw myself into every single [project] 1000000% and work my bum off to do it justice, because I just feel so grateful to even have the chance.

On the power of crafting:

Crafting is not about the end result, definitely not. For me, crafting is about the process. Never ever feel intimidated by crafting or like you can't do it because there's no such thing. There's no such thing as somebody who can't craft because even if you craft an absolute mess, you've crafted. If you enjoy the process but you're not necessarily happy with the result, you know you enjoy the process, which is the most important thing.

On building a second family online:

During this pandemic, when I've felt completely claustrophobic and surrounded by my actual family – who I love by the way and I don't take for granted – there's definitely something to be said for having this other little community to be able to share thoughts and feelings and just sit and talk to. It’s been a real godsend, to be honest with you. Sometimes I sit in a room and I just go, "Oh my God. I'm sick of my family. I'm a terrible person." And a load of other people go, "No, I am too. I'm hiding in the bathroom.” And it's just the biggest relief, honestly.

On the thrush bath:

I only call it the thrush bath [as a joke] because I do get thrush sometimes, but not from the baths. I just think I have that kind of vagina if I’m completely honest with you. Sometimes I have a Lush bath bomb, Wild and Wood bath milk, and bubbles. There’s always going to be people that go, “Who needs to do all that in the bath?” Nobody, literally no one ever needs to do this to their bath, but it makes me feel like I’m doing something special for me. And it’s only a few petals and a blooming bath bomb, do you know what I mean? There’s nothing else to it, but it automatically makes me feel like I’ve gone to the spa.