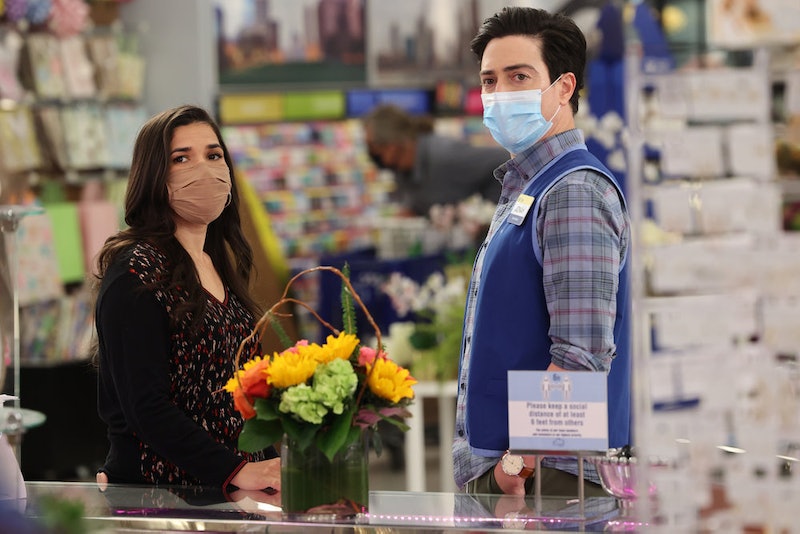 Spoilers ahead for the Superstore series finale. One of Superstore’s greatest attributes has always been its ability to blend feel-good moments with an honest look at the challenges facing retail employees, and that’s on full display in the series finale. Though Zephra ultimately closes Cloud 9 in order to turn the store into a fulfillment center, the employees all still (mostly) get a happy ending. It’s a perfectly imperfect close to the beloved NBC sitcom.

“It wouldn’t feel like the show if it was a completely upbeat, happy, almost fairy tale ending,” co-showrunner Gabe Miller tells Bustle. “The fulfillment center allowed us to have that note of reality, and basically kind of a culmination of not only themes of the series, but specifically our COVID season, that’s put more pressure on retail ... But at the same time, it’s [a finale] that viewers love and we love and [allows] the characters to end in a good place and reassure people that they’re gonna be OK after the series ends.”

In her highly anticipated return, Amy (America Ferrera) joins her friends in fighting to keep Cloud 9 open. It doesn’t work, and she decides to quit her job at Zephra. But the gesture of solidarity serves as an emotional reminder of what made Superstore and Cloud 9 great: the people. “It just felt like the right, the smart, the comfortable, the happy, the homiest way to end the show,” star Ben Feldman tells Bustle.

His character, Jonah, also gets a just-right sendoff: an epilogue reveals he’s happily married to Amy (who’s since gotten a new job) and is now running for city council. Finally, Jonah has found a way to use his “obnoxious, liberal, podcast-listening-to, know-it-all” tendencies — as Feldman fondly puts it — for good.

Elsewhere, Glenn gets to reopen Sturgis & Sons — which Cloud 9 originally put out of business — in a redemptive, full-circle moment. Dina, Justine, Sandra, and Marcus all start working at the new fulfillment center together. And the whole bunch is seen gathering around at a cookout in part of a sweet montage interspersed by Garrett’s surprisingly earnest final announcement for the store: “Most jobs suck 99% of the time. So you really gotta enjoy those moments that don’t.”

Still, it wouldn’t be Superstore without a touch of irreverence: it’s also revealed that Elias has been the cause of all the severed feet showing up in Cloud 9. “We sort of didn’t want to damn Elias in that way. We love him. He’s so loveable,” Superstore co-showrunner Jonathan Green tells Bustle. “But then we realized, that’s what’s funny about it too. Danny Gura, who plays Elias, has always been so great and such a supporter and cheerleader for the show. Talking to him on set, he was honored, actually, to have that role, to be that big a part of something that was such a recurring part of the show over the seasons.”

Despite the series tying up most loose ends, the cast still doesn’t feel quite ready to let Superstore go. Nico Santos, who plays Mateo, says they could have “Grey’s Anatomy-d [it and] introduced a whole batch of new workers every season.” And though there’s already a spinoff in development — Bo & Cheyenne — Mark McKinney (Glenn) has another one in mind for his character. “In three years there should be another series: Sturgis & Sons, a hardware store with a really sweet staff, and no one ever comes in; they’ve yet to earn their first dollar.”

From what we know about Glenn’s somewhat passive business style, that sounds exactly right... and like a primetime hit.

More like this
The First 'Percy Jackson & The Olympians' Teaser Comes With An Ominous Warning
By Grace Wehniainen
Nicola Coughlan Shared A Lady Whistledown Excerpt From ‘Bridgerton’ Season 3
By Grace Wehniainen, Alyssa Lapid and Sam Ramsden
A New 'And Just Like That' Table Read Pic Confirms A Key Character's Return
By Jack Irvin and Grace Wehniainen
The New 'National Treasure' Series Trailer Teases The Return Of A Popular Character
By Grace Wehniainen
Get Even More From Bustle — Sign Up For The Newsletter