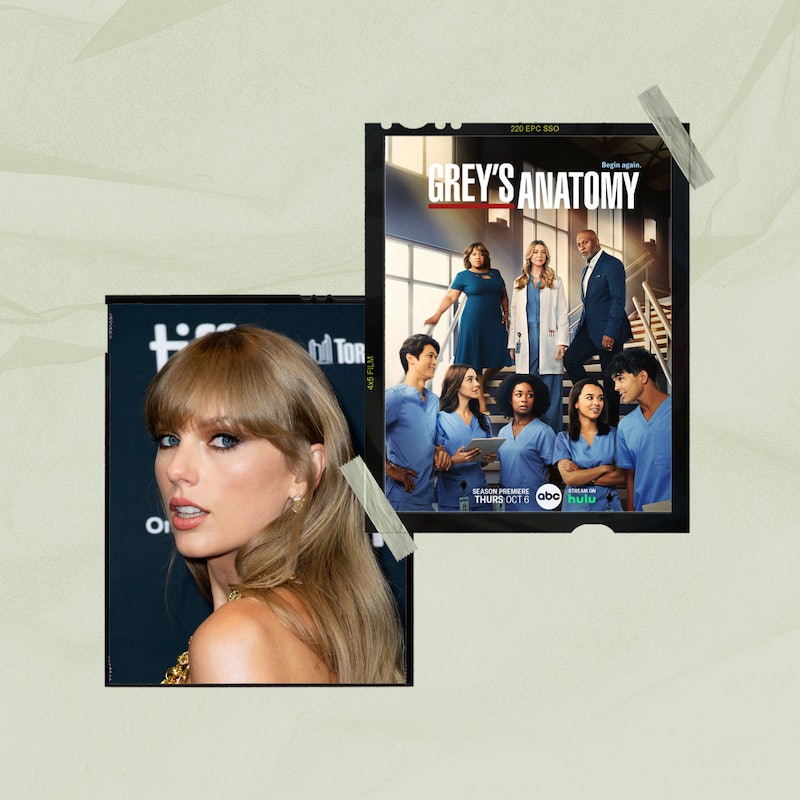 It’s a good time to be a Swiftie — and a Grey’s Anatomy fan. It’s also a very busy time. Grey’s Anatomy Season 19 premieres on Oct. 6, two weeks and three hours before Taylor Swift’s Midnights releases at, well, midnight on Oct. 21. But what’s the connection — besides two release dates that happen to be very close to each other? Well, as it turns out, Grey’s Anatomy has been subtly dropping Swiftie Easter eggs in its promotion for Season 19.

It started with a series of posters that sport the tagline, “Begin Again,” which Swifties will recognize as the hopeful, moving-on track that debuted on the pre-Taylor’s Version Red precisely one decade ago. It makes sense as a nod to the season’s themes of rebirth, as new interns will join the fold as Grey Sloan rebuilds its residency program. But still, the turn of phrase is super specific — and Grey’s itself acknowledged the reference in a Sept. 29 Instagram caption that explicitly echoes Dr. Swift’s lyrics: “On a Thursday, in a stairway, I watched it begin again.”

Many Swifties clocked the clever reference in the comments.

But here’s where it gets a little weird (and much more fun for Easter egg hunters): The first episode of Grey’s Anatomy Season 19 is titled “Everything Has Changed,” aka another Red track — one that’s a collaboration with Ed Sheeran. The show names every episode after a different song, and Swift’s catalog has been honored before. For example, the Season 10 episode where Cristina and Burke reunite in Switzerland was aptly titled “We Are Never Ever Getting Back Together.”

The timing of the latest Swift reference feels extra intentional, though, given the poster nod and the imminent release of Midnights. But what does it all mean? Perhaps the use of Red titles is simply meant to prepare us for the tone of Grey’s Season 19 — will it be “miserable and magical” à la “22,” for example? (The show usually is both of those things, TBH.)

Or is there something bigger afoot, like maybe a cameo from the musician herself? Swift is a huge fan of Grey’s Anatomy; she named one of her cats Meredith Grey and invited Ellen Pompeo to be in the star-studded “Bad Blood” music video.

Several Grey’s cast members would be thrilled for Swift to appear on the show. In 2020, Camilla Luddington told BuzzFeed that Swift “deserves” a guest spot on the show. “I don’t know how it would happen, as a patient or she’s a doctor.” For her part, Pompeo told Extra earlier this year that she’d “love” her friend to have a cameo moment but acknowledged that Swift is “pretty busy.”

That leads us to another (potentially more likely) scenario — that instead of Swift herself appearing on Grey’s, one of her songs does — like a single from “Midnights” before the album drops in full on Oct. 21? Excitingly, there’s a huge precedent for this. “White Horse” appeared in the premiere episode of Grey’s Anatomy Season 5 in 2008 as one of the first singles off Fearless, which was released two months later. The song played during Cristina and Owen’s first kiss ever. So, who knows? Maybe “Midnights” will provide the soundtrack to the next major Grey’s Anatomy ship.

More like this
A Taylor Swift Documentary About The Ticketmaster Fiasco Is Streaming Now
By Grace Wehniainen
Taylor Swift Fans Sue Ticketmaster For The Eras Tour “Ticket Sale Disaster”
By Jake Viswanath
Elton John Shares Plans For Landmark Glastonbury 2023 Performance
By Sam Ramsden
The 'Love, Lizzo' Harry Styles Scene Is Just 1 Moment That Made Fans Feel Seen
By Brad Witter
Get Even More From Bustle — Sign Up For The Newsletter