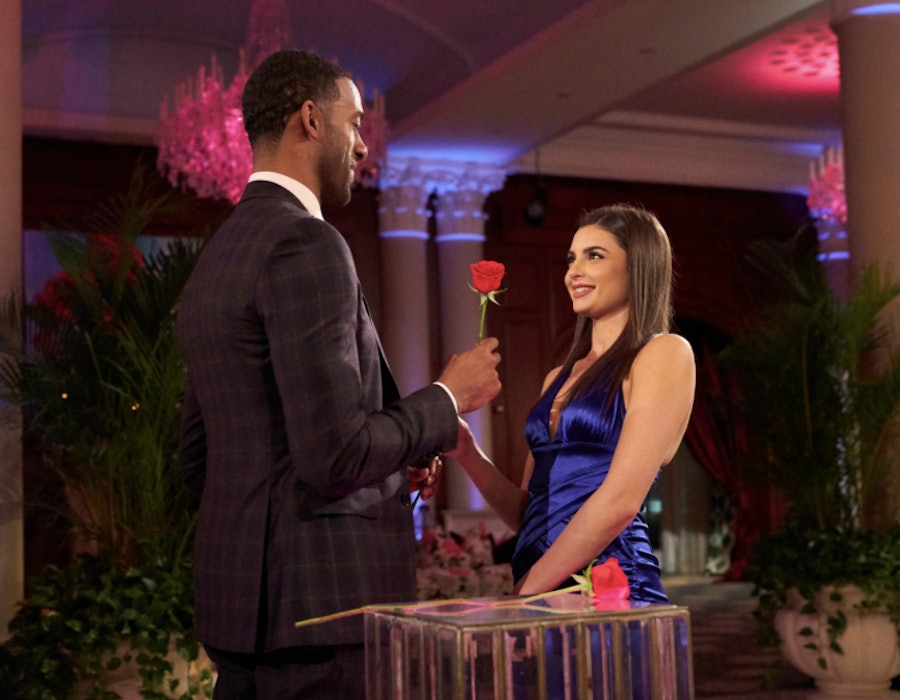 The Bachelor has always been a messy franchise, but the latest season of the show is chaotic even by its own standards. In a supposedly historic season with the Bachelor franchise’s first Black male lead, a white frontrunner is accused of liking racist social media posts, beloved host Chris Harrison has temporarily stepped back from his duties after he tried to get involved, and fans say that the latest issues are indicative of structural problems within the franchise as a whole.

It's a lot of moving parts, especially for less involved members of Bachelor Nation. Here's everything you need to know about the latest reckoning within the Bachelor world, and where we go from here.

Let's start at the beginning. What are the broad strokes of the controversy?

Matt James is the star of Season 25 of The Bachelor, and he’s the show’s first-ever Black male lead. (The first Black lead was The Bachelorette’s Rachel Lindsay in 2017.) Going into the season, the franchise made a big push to show that production and the network were taking James’ status as the lead seriously and were seeing this as an example of the very white franchise turning a new leaf.

Viewers raised questions of how true that was within weeks of the season’s premiere. There have been a number of problematic incidents with this particular cast, but this current ordeal centers on a contestant named Rachael Kirkconnell.

Why are we talking about Rachael Kirkconnell?

On Jan. 26, a TikTok user accused Kirkconnell of liking racist photos on social media and taking photos with friends wearing MAGA hats. Another user on the platform also alleged that she knew Kirkconnell in high school and that the contestant had bullied her in the past for dating Black men.

James himself was asked about the rumors on Feb. 2; in his response he asked viewers not to make assumptions without giving Kirkconnell the opportunity to speak freely. “Rumors are dark, and they’re nasty, and they can ruin people’s lives,” he explained. “I would give people the benefit of the doubt, and hopefully, she’ll have her time to speak on that.”

At the time, Kirkconnell and the franchise at large didn’t address the controversy, but in early February, new photos surfaced of the 24-year-old reportedly attending an antebellum plantation-themed party in college in 2018. Internet sleuths also unearthed additional images of her dressed in a Native American costume. At first, Kirkconnell didn’t make a public statement about the photos or other allegations.

How did Chris Harrison and Rachel Lindsay end up getting involved?

On Feb. 9, Harrison did an interview with former Bachelorette Rachel Lindsay on ExtraTV in which he claimed he wasn’t defending Kirkconnell but tried to argue that 2018 was a different time from 2021 and that plenty of people went to similar plantation-themed parties. He added that fans' criticism of Kirkconnell’s photos was a “slippery slope” in asking contestants to talk about their pasts. “The woke police is out there,” he told Lindsay. “And this poor girl Rachael, who has just been thrown to the lions, I don't know how you are equipped when you have never done this before, to be woke enough, to be eloquent enough, to be ready to handle this.” The backlash against Harrison was swift, with viewers calling for his resignation within hours of the interview airing.

Two days later, Harrison issued an apology to Bachelor Nation and specifically to Lindsay for his words. “While I do not speak for Rachael Kirkconnell, my intentions were simply to ask for grace in offering her an opportunity to speak on her own behalf," he wrote. "What I now realize I have done is cause harm by wrongly speaking in a manner that perpetuates racism, and for that I am so deeply sorry.” He also announced that he wouldn’t host the “After the Final Rose” reunion special for the season and would be stepping back from his hosting duties for the time being.

Has Rachael Kirkconnell responded to the photos?

On February 11, Kirkconnell released a statement on Instagram conveying her regret for the alleged photos and admitting that her actions were “wrong,” “ignorant,” and “racist.” She continued, “I am ashamed about my lack of education, but it's no one's responsibility to educate me... I deserve to be held accountable for my actions.”

Has Matt James said anything more about the controversy?

Bachelor Matt James responded in more depth to the series of events on Feb. 22, calling the situation “devastating and heartbreaking,” though he spoke more specifically to Harrison’s on-air conversation with former lead Lindsay than he did Kirkconnell’s photos, though he called them "incredibly disappointing."

“This moment has sparked critical conversations and reporting, raised important questions, and resulted in inspiring displays of solidarity from The Bachelor nation,” he wrote. “It has also pushed me to reevaluate and process what my experience on The Bachelor represents, not just for me, but for all of the contestants of color, especially the Black contestants of this season and seasons past, and for you, the viewers at home.”

He concluded, “I will continue to process this experience, and you will hear more from me in the end. My greatest prayer is that this is an inflection point that results in real and institutional change for the better.”

Some have speculated on why James hasn’t said much about Kirkconnell’s role in this latest scandal. She’s been a frontrunner all season long, and rumors have swirled that she has a high chance of getting Matt's final rose, setting up potential issues for the pair if they do, in fact, end up together at the end of the show (and if so, if they break up as a result of the controversy). It's a reason that the After the Final Rose special will no doubt be interesting.

Is this the first time that The Bachelor franchise has been engulfed in a racism scandal?

Far from it. When Rachel Lindsay was the first Black lead on Season 13 of The Bachelorette, she dealt with a contestant named Lee Garrett, who picked numerous fights with Black contestants. During the season’s airing, fans discovered several racist, sexist and homophobic tweets from his Twitter account in 2015 and 2016, in which he called the Black Lives Matter movement a terrorist group, compared the NAACP to the Ku Klux Klan, said to never trust a “female liberal,” and referred to the Orlando Pulse Nightclub shooting as “all this ‘gay talk.’” Lindsay has since stated that she believes that Garrett was only cast to “add controversy” to her season and was never considered a serious romantic contender by producers.

Scandal then struck the franchise one year later during Season 14 of The Bachelorette. Days after the show’s premiere, former Bachelor contestant Ashley Spivey uncovered troubling Instagram posts that contestant Garrett Yrigoyen had liked on social media that were misogynistic, transphobic, and otherwise problematic in nature. Yrigoyen went on to win Bachelorette Becca Kufrin's final rose and later apologized for the social media activity. He and Kufrin remained engaged for two years before announcing their breakup in Summer 2020, weeks after Yrigoyen posted a “thin blue line” image on Instagram in support of law enforcement during the Black Lives Matter protests.

Additionally, while this situation has unfolded with Kirkconnell in the last few weeks, 26-year-old Demi Burnett, a breakout star of Colton Underwood’s Bachelor season two years ago, found herself in hot water after photos reportedly taken in 2020 surfaced of her wearing a Yeezy jacket with a Confederate flag on it. Burnett claimed she didn’t know the significance of the flag at the time of the incident.

Are there any signs that the franchise will change?

Since Chris Harrison stepped away from his hosting duties, Rachel Lindsay has announced that she will no longer have anything to do with the franchise after her contract is up. "How much more do I want to be affiliated with this? How much more can I take of things like this?" Lindsay said on Higher Learning, her podcast with co-host Van Lathan.

Otherwise, producers and network executives at large haven’t gotten too specific about how this latest ordeal relates to previous incidents in the franchise, though they did release a blanket statement supporting Rachel Lindsay amid fan harassment and online bullying on March 1. It remains to be seen how the network handles discussing Kirkconnell's time on the show and her relationship with Matt at the After the Final Rose special, particularly in Harrison’s absence.

Speaking of Chris Harrison, who is replacing him in the interim?

Shortly after Chris Harrison stepped back, ABC announced that Emmanuel Acho would replace the longtime host to lead the After the Final Rose special. Acho is the creator of the video series Uncomfortable Conversations with a Black Man and a book of the same name. “I’ve accepted the Rose and am honored to be hosting the @bachelorabc After the Final Rose this year,” Acho said on Instagram. “It's been a pivotal season & this episode will be one of the most storied shows in its history. Empathy is needed and change is coming.”

A week and a half after the controversy, Harrison also issued a more formal apology on Good Morning America, where he said he would return to host the franchise for the upcoming season of The Bachelorette. “I plan to be back, and I want to be back. And I think this franchise can be an important beacon of change. I know that change is felt, not just by me, but by many others. And we are excited and willing to do the work to show that progress,” he said. “This interview is not the finish line. There is much more work to be done. And I am excited to be a part of that change.”

This article was originally published on Feb. 24, 2021