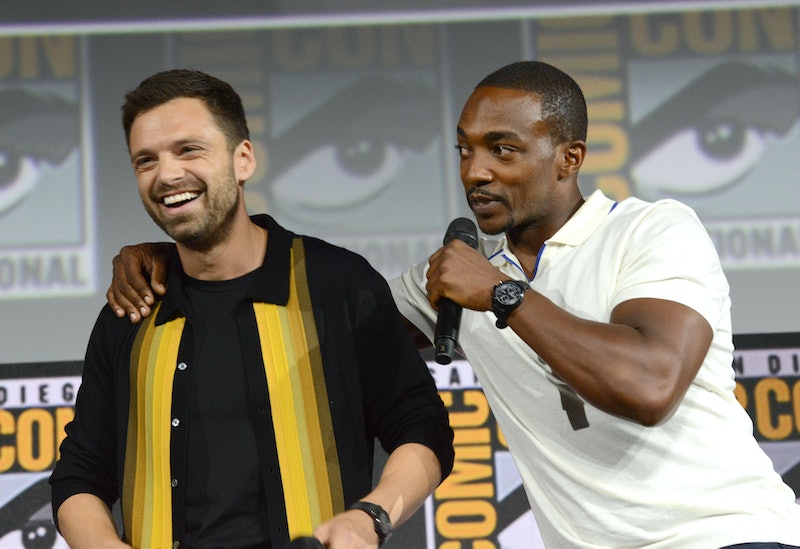 Season 1 of Wandavision — the trippy, much-talked-about Disney+ series — may be wrapping up this March, but Marvel fans won't need to wait long for more superhero content. The Falcon and the Winter Soldier will hit the streaming platform on Mar. 19, and viewers got a closer look at what to expect from the series during a Super Bowl spot and extended trailer online.

In the trailer, Sam Wilson (Anthony Mackie) and Bucky Barnes (Sebastian Stan) work together as they face a villain who appears to be Baron Zemo, the dude from Civil War who believes that "superheroes cannot be allowed to exist." The show will also find them learning to deal with their new post-Endgame dynamic. (Just like with Wandavision, this is the story of two heroes dealing with the fallout of lost loved ones — albeit in a less surreal setting.)

Emily VanCamp's Sharon Carter from previous Captain America films also made an appearance, and it seems she'll be joining the fight with the prickly but powerful duo. Steve Rogers' Cap, played by Chris Evans, is not likely to resurface in this series, though. After he returned as an older man at the end of Endgame, he seemed content and like his story came to its natural conclusion, as Evans once suggested as well.

"Probably not," Evans said to Entertainment Tonight when asked about returning to the popular cinematic universe back in 2019. "There was a million ways that whole tenure with Marvel could've gone wrong, and it didn't. So to stick the landing so well, it would be a shame to kind of revisit unless there was something very unique that we felt the need to reveal. So for now, it just feels like, let's just be content with how well it ended."

As described by Disney+, the new series will see Sam and Bucky "team up in a global adventure that tests their abilities — and their patience."

More like this
Nicola Coughlan Shared A Lady Whistledown Excerpt From ‘Bridgerton’ Season 3
By Grace Wehniainen, Alyssa Lapid and Sam Ramsden
Louisa Harland’s New Show Is A Far Cry From Derry Girls
By Frances Stewart
This Episode 6 Moment Foreshadows Viserys' Fate On 'House Of The Dragon'
By Grace Wehniainen
Spencer Matthews Will Search For His Brother In A New Disney+ Doc
By Darshita Goyal
Get Even More From Bustle — Sign Up For The Newsletter