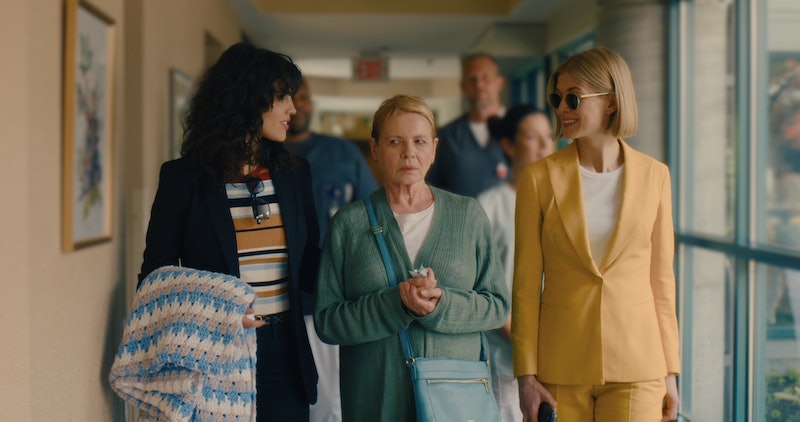 “Free Britney” has gone from hashtag to full-on movement over the course of the last few years. Now with the release of the New York Times documentary, Framing Britney Spears, many Spears fans are wondering: why has the court system continued to keep the pop star under a conservatorship? The doc ignited a power keg and now there's more fuel for the fire. Netflix recently released a new film, I Care a Lot, that further illustrates the grim reality of court-appointed guardianship. And many people across the internet, including the brutal pop culture commentary account Diet Prada, are pointing out the eerie similarities between the film and Spears' case. Because both Framing Britney Spears and the fictional I Care A Lot showcase the immense power legal guardians and conservators, like Britney’s father Jaime Spears, can hold over their wards.

I Care A Lot follows Marla Grayson (Rosamund Pike), a scam artist whose job is to “take care” of people who due to age or disability, are unable to take care of themselves. She takes advantage of vulnerable people and makes a personal profit off of her position of power. In the simplest terms, court-appointed legal guardianship gives a guardian legal authority to make financial, medical, and life decisions on behalf of a person deemed unable to care for themselves. In the film, Marla exploits this system to the fullest extent possible, until she meets Jennifer Peterson (Dianne Wiest), whose nefarious connections make Marla's scam increasingly more complicated to pull off.

Needless to say Twitter is freaking out over the parallels between the Free Britney Movement and the film. Even co-star Eiza González posted the #FREEBRITNEY hashtag when promoting the film. Read on for more reactions to the film, below.

More like this
Lindsay Lohan & Jonathan Bennett Celebrated Mean Girls Day Very Differently
By Jake Viswanath
Here’s Everything Coming To & Leaving Netflix In October
By Jake Viswanath
Twitter Is Pouring Out Some Zhampagne As ‘Schitt’s Creek’ Leaves Netflix
By Brad Witter
What’s New On Netflix: Ana De Armas’ 'Blonde' & A Nick Kroll Special
By Arya Roshanian
Get Even More From Bustle — Sign Up For The Newsletter