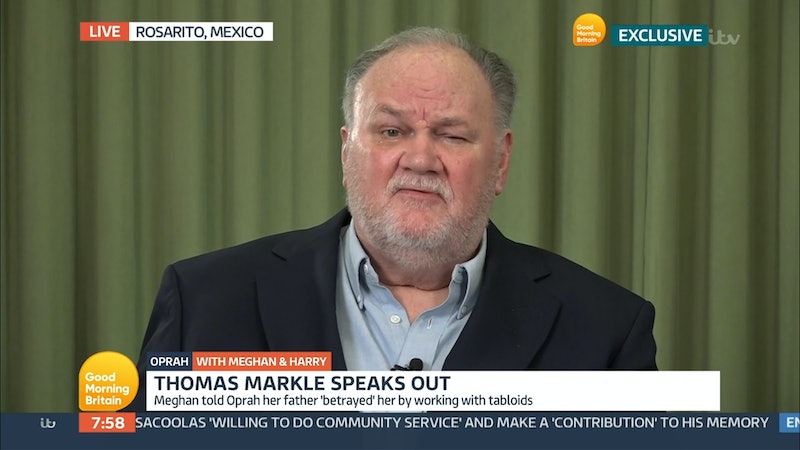 Speaking to Piers Morgan and Susanna Reid on Tuesday morning (March 9), Thomas Markle Sr. gave his first interview to Good Morning Britain, following Oprah’s conversation with his daughter Meghan and Prince Harry, which aired on ITV last night. And it was clear he had a lot to say. Describing Meghan and Harry’s discussion as “over the top” and “disappointing”, Thomas gave his opinion on what was covered.

Below, are four of the key takeaways from Thomas Markle’s interview with GMB, which shed further light on the fractured relationship between Meghan and her father.

During an appearance on GMB in January, Thomas Markle gave Harry and Meghan an ultimatum: he said he’ll continue talking to the press once a month until Meghan speaks to him. “I don’t want to sit in silence in my living room for the rest of my life waiting for someone to get back to me,” he said (via Cosmopolitan).

Thomas reiterated this ultimatum in his latest appearance, concluding that “when they decide to talk to me, I’ll stop talking to the press.”

He said Meghan’s comments about the “betrayal” were true...

During Oprah’s interview, Meghan revealed her father denied having any role in the paparazzi photos that are now known to have been staged. When asked by Reid why he wasn’t honest with Meghan, Thomas Markle confirmed that he lied to his daughter. “I wish I hadn’t done the whole thing,” he said, “but here’s the other side of this coin. No one took any time to protect any member of our family. We were attacked by the press every day.”

Thomas Markle also believes that he was “left out to dry” by Harry and Meghan. He told GMB that it was recommended the couple should get help for him, but “Meghan and Harry denied that and said don’t do it.”

But, he suggested the racist remarks about Archie were not

Responding to comments made about the colour of Archie’s skin, Thomas Markle suggested that the remark could be as simple as a someone asking a “dumb question, rather than being a total racist.” He also highlighted his respect for the royals, saying that he doesn’t “think the British family are racist at all.”

Thomas Markle then went on to seemingly contradict himself, saying “the whole thing about colour and how dark the baby is is b*******,” before Reid jumped in to apologise for his language.

Meghan “ghosted” her family, according to Thomas Markle

When asked about how he felt listening to his daughter talk about her mental health, Thomas Markle made it clear that he “would have been there for her” had he “known she was having psychological problems.” However, he also insinuated that Meghan had no one to talk to because she’d “pretty much ghosted” her family on both sides. “She really had no one to reach out to. She would have had us if she kept us,” Thomas Markle told GMB.

More like this
10 Photos Of William, Harry, & Their Cousins Honoring The Queen Together
By Stephanie Topacio Long
William & Kate Shared How Their Kids Are Doing As They Mourn The Queen
By Stephanie Topacio Long
King Charles Ensured These Subtle Tributes Were Included In Queen Elizabeth’s Funeral Wreath
By Sophie McEvoy
Camilla Paid Tribute To The Queen In A Heartfelt Video Message
By El Hunt and Sam Ramsden
Get The Very Best Of Bustle/UK