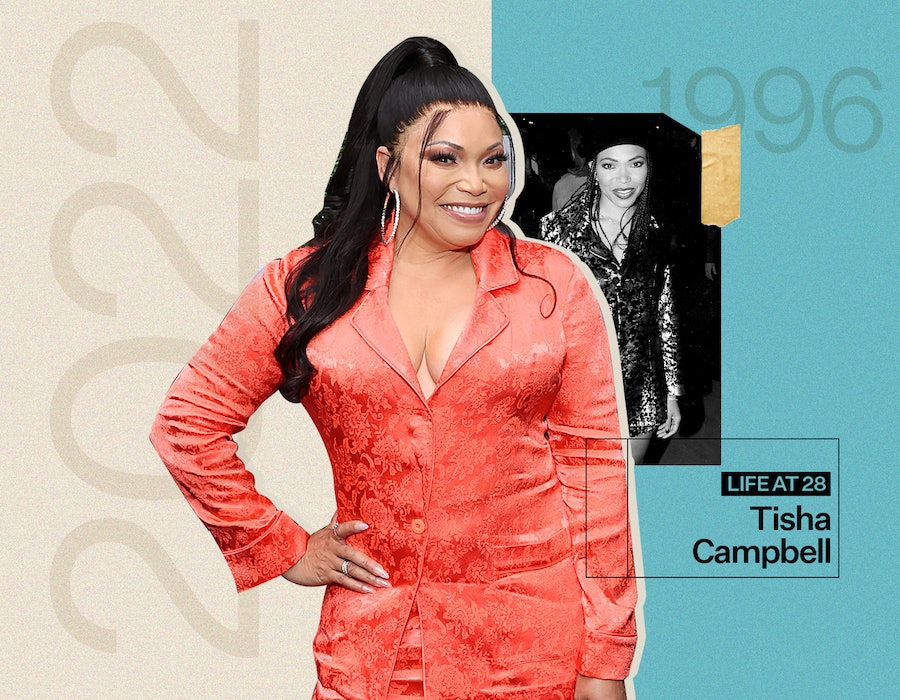 The new Netflix rom-com series, Uncoupled, inextricably links relationships with real estate. When New York broker Michael (Neil Patrick Harris) is jilted by his partner of 17 years, he’s not just sad that he’s suddenly single — he’s disturbed when he notices the disparity in their personal tastes in their luxurious apartment. It’s a feeling that Tisha Campbell — who plays Michael’s colleague-slash-confidante, Suzanne — knows pretty well herself. At 28, she was learning to navigate home as a newlywed, and her taste in decor was a work in progress.

“It was corny,” Campbell tells Bustle. “It wasn’t as sophisticated. Right now, my style is all about wellness, and plants, and a lot of negative space. Back then, I was trying to compromise masculine and feminine.” Now, two years after officially divorcing Duane Martin, Campbell is confident in cultivating her own space.

But adjusting to married life wasn’t the only major transition Campbell faced in her late 20s. For five years, she starred as Gina on the successful FOX sitcom Martin, but she left the show shortly after turning 28, filing a sexual harassment lawsuit against co-star and creator Martin Lawrence. She ultimately reconciled with her onscreen husband, and they even appeared together on the Martin reunion special in June. “We worked really hard to reconnect, to forgive,” Campbell told CBS.

Even in her 20s, the actor was not afraid to move from one thing or the next — a guiding philosophy throughout her career. “It doesn’t matter if it was 1996 or 2022,” Campbell says. “My agent, to this day, is like, ‘Do you ever just sit still and sit down?’ No, no I don’t. Especially now as a single mom.”

Below, Campbell opens up about relationships, leaving Martin, and the nickname from her 20s she still can’t shake.

I was doing the last year of the Martin show. I was hanging out with Tichina Arnold every single day, trying not to get in trouble. We didn’t go to a lot of clubs. We went to mostly house parties. At the time, it was the ‘90s, so we were really working a lot.

What was your go-to outfit for going out?

Tichina and I weren’t those girls. We didn’t dress up. We mostly wore jeans and sneakers because we wanted to dance. We danced hard. They still call me Dance Too Hard.

You left Martin shortly after turning 28 — at a time when a lot of people are obsessed with trying to make it. When you decided to step away, what was it like putting yourself first?

You don’t think of anything like that. You just think about what’s next. We were all raised in this business — me, Tichina, and Carl [Anthony Payne II] all knew each other from New York when we were 11 and 12 years old. The way we were raised in this business, you do a gig, and you’re only as good as your last gig, so you always move on to the next. You don’t even look at the old episodes or the movies, you just move forward.

In Uncoupled, Michael tells Suzanne that their roles have flipped — she’s used to being the disaster friend, and he is the “boring, old, married guy.” Were you settled into a routine or constantly having those conflicts at 28?

You’ve said that the end of a relationship can be like a “beautiful devastation.” I thought that really meshed well with Uncoupled.

More like this
At 28, Sharon Horgan Was Hoping To See Damon Albarn At The Pub
By Samantha Rollins
On 'The Handmaid’s Tale,' Christine Ko Fights Back
By Gretchen Smail
Here’s Everything Coming To & Leaving Netflix In October
By Jake Viswanath
'Grey's Anatomy's New Intern Got Advice From Dr. Bailey Herself
By Grace Wehniainen
Get Even More From Bustle — Sign Up For The Newsletter