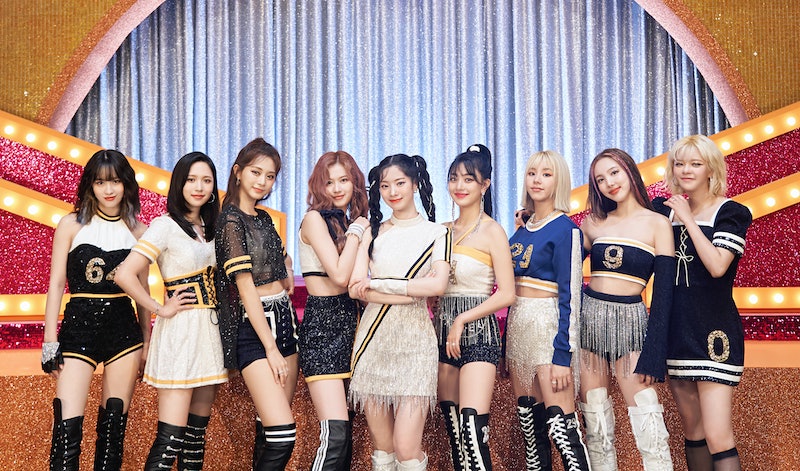 For the nine members of TWICE, all it takes is a one look for them to get the feels. “We get the feels when we make eye contact and all of a sudden just burst out laughing,” singer Nayeon reveals. “We just get each other. When we’re doing a photoshoot and some unexpected thing happens, we kind of look at each other. We don’t have to speak to each other — words aren’t required. We just make eye contact and know exactly what to do next.”

It’s a kind of telepathy — a signal, if you will — that Momo, Mina, Tzuyu, Sana, Dahyun, Jihyo, Chaeyoung, Nayeon, and Jeongyeon, have expertly crafted over the past six years by living, breathing, and working alongside each other as one of the biggest girl groups in the world. Sitting around a conference table in Seoul, South Korea, the Billboard chart-smashing artists frequently find themselves getting “the feels” when chatting with Bustle via Zoom about their debut English single. After each question, a curious look will volley across the table between the members, almost as if they’re waiting to see who will jumpstart the conversation, before someone will take the lead and get the ball rolling. Carrying that wavelength forward, another member will often interject with a similar idea or anecdote, causing the former to crow, “That’s right! That’s right!”

That instant connection is the genesis of TWICE’s first English-only song, fittingly titled, “The Feels.” Backed by a groovy bassline, the glitzy pop track and its catchy lyrics are all about the instant, heart-stopping connection that two people feel when they experience love at first sight.

While the group has released English versions of singles in the past, including “More & More” and “I Can’t Stop Me,” this new song is a bold introduction to the group that Momo equates to a “new chapter” in the book of TWICE. “We are embarking on a new chapter of our lives by releasing an English single,” she says. “I hope that it can serve as a tool to meet more people and communicate with more fans all over the world.” Rapper Chaeyoung adds: “Not only is this song very addictive — it has great hooks — but it shows who we are. It shows our colors and our style.”

“The Feels” was also inspired by the group’s desire to communicate with their fans in the U.S., whom they’ve been unable to reunite with since their 2019 Twicelights World Tour due to the global lockdown. “We wanted to communicate with them better,” Nayeon adds. “When we’re doing a global tour, we try to sing our songs in their respective languages; when we’re singing the song in their language we just feel very proud.”

“My dream when I started was to become so famous that my family in Japan would see me on TV. ... It’s shocking, almost, when I think about how much we’ve accomplished and how much of that dream actually came true.”

Below, Bustle caught up with TWICE to dissect “The Feels,” analyze how the group has evolved this past decade, and see which member makes the best party playlists.

What were your thoughts when you heard “The Feels” for the first time?

Jihyo: I really loved the song and it really took us back to when we started — it’s very similar to our early songs so we loved it.

Dahyun: The bright, energetic vibe “The Feels” brought out gave me the power to record the song and practice choreography with enthusiasm. We had to keep ourselves from dancing free-style because the music itself was so fun to listen and dance to!

Which of your previous singles do you see that similarity?

Sana & Nayeon: We think “The Feels” is a mixture between “Like OOH-AHH” and “Cheer Up.” When we first showed the teaser of the song online, our fans said that it reminded them of “Like OOH-AHH.”

How would you describe the song’s message?

Chaeyoung: The song is about falling in love at first sight and how we should stay true to our feelings when we’re struck with love. It shows our style as a group; not just the words or the message of the song, but the entire aura or feeling of the song reflects who we are.

Do you have any memorable experiences from filming the music video for “The Feels?”

Sana: The music video is a prom party with our dancers. In it, we do some freestyle dancing and there’s a part where Jeongyeon dances. The entire scene is not ... in the music video, but I hope one day it’ll be released to the public and the fans get to see it because it’s really awesome. She really brightened up the mood of the entire studio.

How did you develop that sixth sense of “the feels” between members?

Nayeon: We’ve been together for so long and we’ve seen each other reacting to certain situations in a certain way, so we know exactly how each other will react in a given situation. That made us understand each other better throughout the years.

Chaeyoung: We don’t try to force each other into understanding where we come from either. Rather, we respect each other and try to see the situation from their perspective. I think that’s why we get along really well as a group.

The teaser images for “The Feels” feature an invitation to Prom 2021. If you were hosting a huge event like prom, which TWICE member would you trust to create the perfect playlist?

TWICE: It would be Chaeyoung!

Nayeon: If Chaeyoung were to DJ the prom party, I feel like she would constantly change songs before they even end — she has so many songs in her inventory.

Chaeyoung: I’m also the DJ for the stretching session we do before we go onstage. I always play the warmup songs for our members.

Do you have any current favorite songs to play?

Chaeyoung: It’s a mixture between slow songs and party songs. I really enjoy picking songs and it kind of suits me. I enjoy the time where I’m preparing the playlist for the members.

When it comes to hitting “bullseye” — like the song’s lyrics mention — TWICE has shown off their strong archery skills at the Idol Star Athletics Championships in the past. Which member would you describe as the most athletic?

Nayeon: In terms of archery, it’s definitely Tzuyu who’s the best. Recently, on our program Time to Twice, we had a sports day event episode and found out that every member is good at a different sport. So I can’t really say who’s the most athletic member, but that everyone has their own best type of sports.

In between releasing songs in Korean and English, TWICE also released their third Japanese studio album Perfect World. What is it like to record songs in so many different languages?

Jihyo: When we record in different languages it’s not really a problem, but when we’re doing concerts we don’t have the words in front of us so sometimes when we’re singing Korean songs for our Japanese fans it gets really confusing. That’s the difficult part.

As a group, TWICE is known for its songwriting skills, which were heavily featured on your last album Taste of Love. How has your approach to songwriting and song production evolved over the last six years?

Nayeon: In the past, we didn’t really have a lot of opportunity to participate in the album making process, but recently that ratio has really increased. During our daily lives, we all try to think about what kind of songs we’d like to create for our fans, what kind of performance we’d like to show, or what kind of lyrics we would write. We think about that a lot more these days.

Dahyun: I remember having trouble even trying at first. It was difficult to come up with a topic, choosing the right words for the lyrics, and writing the first line of the verse. Even though there were times when I doubted myself, I kept on trying. As a result, I now enjoy and get excited thinking of how to include my own message into the lyrics.

How do you feel your choreography correlates to your music?

Mina: A lot of people look forward to our choreography when we release songs. That’s why we try to incorporate choreography that people can follow easily. We are also known for our dances, so we care a great deal about our choreography.

Your 6 year anniversary is this year. What are some things you’ve learned about yourself as a member of TWICE over the years?

Momo: We really need ONCE.

Jihyo: Being part of TWICE taught me how relationships work. It’s not just the nine of us, but we have so many people working with us in our management company as well. Just like going to school, it taught me how human interactions work.

Mina: Something I learned when I became TWICE is that life can turn upside-down in a moment.

Looking back at where you were when you debuted six years ago, where did you hope that your journey as a member of TWICE would lead you?

Tzuyu: My dream when I first became part of TWICE was holding concerts both home and overseas. And meeting lots and lots of fans, and one day meeting fans from all over the world.

Sana: My dream when I started was to become so famous that my family in Japan would see me on TV. I remember when we performed for an end of the year performance once in Japan; it was the first time that my family saw me live onstage and they loved it. It made me really happy to see them happy.

Dahyun: I remember dreaming of the day when we would be in the top rank of music charts. Through my journey as a part of TWICE, I heard people saying that our music and presence brought energy into their lives. Whenever I heard these kind words, I also felt enthusiasm and that propelled me forward to keep on showing my best efforts onstage. I hope this synergy continues forever, where ONCE and TWICE get energy from each other.

How does that dream compare to where you are right now?

Momo: When we started, we had a mixture of both really small dreams and big dreams. Some of the dreams could be described as trivial. Six years later, we’ve accomplished so much. It’s shocking, almost, when I think about how much we’ve accomplished and how much of that dream actually came true.

More like this
Mariah Carey Is Releasing Her “Lost” '90s Grunge Album
By El Hunt
Everything You Need To Know About ‘Black Panther: Wakanda Forever’
By Bustle Editors
Everything To Know About Taylor Swift’s 10th Studio Album, 'Midnights'
By Grace Wehniainen and Jake Viswanath
How Ghosts Inspired Kesha’s New Music
By Jake Viswanath
Get Even More From Bustle — Sign Up For The Newsletter