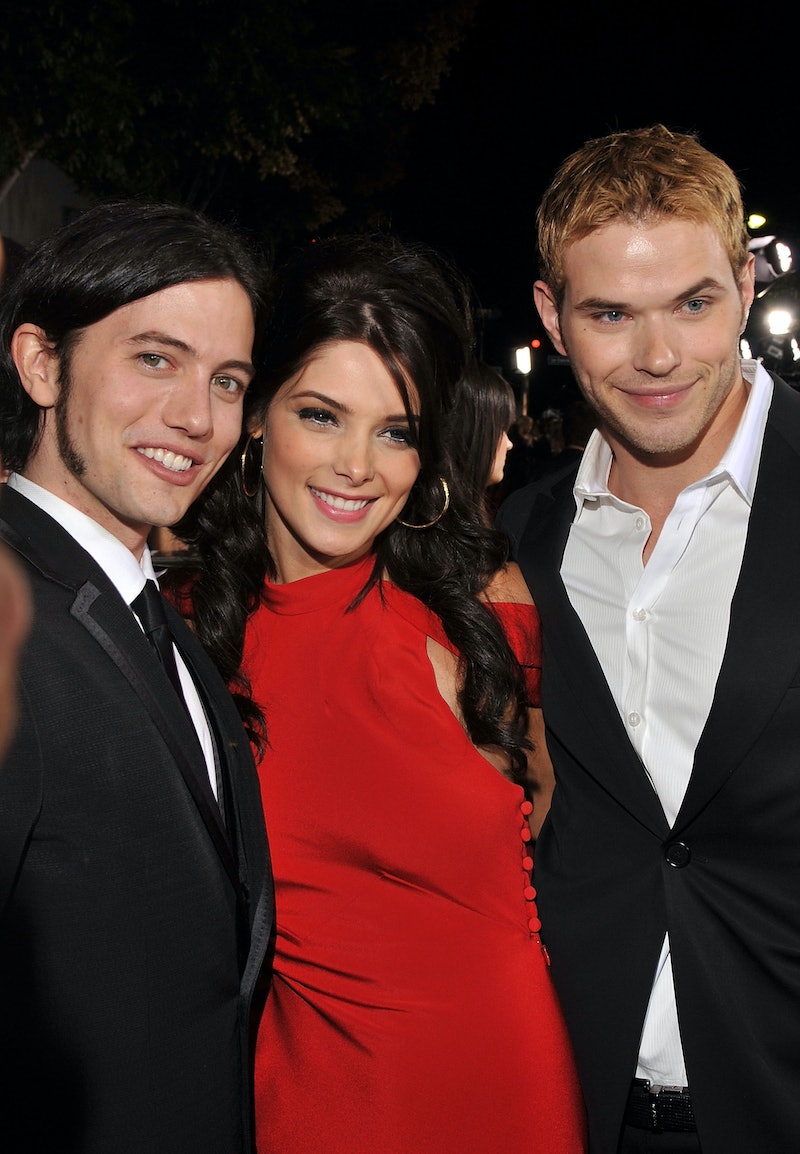 ’Tis the season of family gatherings, even for the fictional Cullen clan. Twilight stars Peter Facinelli, Kellan Lutz, Ashley Greene, and Jackson Rathbone celebrated their “family reunion” on social media on Nov. 19 and 20, showing that they were together in the UK for Comic Con Liverpool 2022. The four actors posed together and with fans and appeared to enjoy the “family vibes,” as Rathbone put it.

Lutz was actually the first to post, getting a jump on his vampire family members by sharing a throwback of his Twilight character, Emmett Cullen, and writing in part, “I’m just here….waiting for @comicconlpool to happen! Can it be Saturday already!” Later, Greene (Alice Cullen) showed the actual “family reunion” on Nov. 19, posting a selfie of her, Facinelli (Carlisle Cullen), and Rathbone (Jasper Hale) to her Instagram story. Her two co-stars both got into the family spirit and reshared it. A day later, Rathbone gave fans even more to enjoy with a carousel including three group shots of the film family. “Liverpool Comic Con Cullen Family Vibes,” he captioned it.

During the event, the four participated in a panel and also signed autographs and took photos with fans. Their booth had a replica of Forks’ welcome sign, and Lutz posed with it in his own Instagram slideshow. “[Feels] good being HOME!” he wrote, before encouraging fans to join them at Comic Con.

The Cullen family was well represented, but it was, of course, incomplete. Not present were Elizabeth Reaser (Esme Cullen), Nikki Reed (Rosalie Hale), Robert Pattinson (Edward Cullen), Kristen Stewart (Bella Swan), and Mackenzie Foy (Renesmee Cullen), plus non-Cullen stars such as Taylor Lautner (Jacob Black) and Charlie Swan (Billy Burke). Ironically, Reed’s real-life husband, Ian Somerhalder, was also in Liverpool for Comic Con — alongside his Vampire Diaries co-star Paul Wesley — while she appeared to have stayed stateside. (Her first photography exhibition, “Into the Unknown,” is currently on display at Leica Gallery Los Angeles.)

Fans made it clear in the comments that they missed the absent stars, but they were happy to see those who were there. “Oh the memories!” one responded to Rathbone’s carousel. Another hilariously (and pretty accurately) added, “y’all are actually immortal, no one’s aged a day.”

It has officially been 14 years since the first movie in the Twilight saga debuted. The adaptation came out on Nov. 17, 2008, and the years since then have brought huge changes for all of its stars. Greene made that extremely apparent with yet another Instagram post related to the reunion. Sharing a photo with her two-month-old daughter, Kingsley, after arriving in the UK for the event, she wrote, “Baby girl handled her first international flight like a champ!” Lutz, himself a father of two, applauded her, commenting, “Well done!”

More like this
Alicia Silverstone Revives Her 'Clueless' Character In This Super Bowl Commercial
By Jake Viswanath
12 Years Ago, Austin Butler Manifested His Oscar Nom In This Disney Movie Scene
By Jake Viswanath
Vanessa Hudgens Is Reportedly Engaged To Cole Tucker
By Jake Viswanath
Sandra Bullock’s Razzies Speech Proves She’s The Ultimate Miss Congeniality
By Sam Ramsden
Get Even More From Bustle — Sign Up For The Newsletter
From hair trends to relationship advice, our daily newsletter has everything you need to sound like a person who’s on TikTok, even if you aren’t.